In a season that has thus far been defined by lower-than-expected play by the offensive line, big plays given up defensively, 4th quarter surrendering of points, and closer-than-expected wins against weak competition, there is a lot to watch for in Saturday’s game against Purdue.  Oh yeah, there is an interesting quarterback situation as well.  While the play has not been up to the level one would hope, Notre Dame has started the season 2-0 and still has everything to play for.  However, changes need to be made if the high expectations of Irish players and fans are to be realized.  Here’s what to look for when the Irish face off against the Boilermakers.

A glaring weakness thus far, the Notre Dame offensive line ranks 126th out of 130 FBS teams in both tackles for loss and sacks allowed while providing very little space for the running game. After witnessing what seemed to be a regression from week one against Florida State to week two against Toledo, where the Irish offensive line allowed six sacks to their MAC opponent, Notre Dame fans will undoubtedly be hoping (and some praying) for improved offensive line play.

During fall camp, Coach Quinn decided to move the individual recruited and trained for center, junior Zeke Correll, to left guard. Notre Dame also brought in transfer Cain Madden to play at right guard. This week, Head Coach Brian Kelly indicated that a guard rotation would occur with junior Andrew Kristofic and freshman Rocco Spindler as the two most likely players to be inserted. Both Kristofic and Spindler impressed during spring, and the rationale given for the rotation (that the workload was too much for Correll and Madden) seems suspect at best.

Watch to see which side Kristofic and Spindler are inserted, the quality of their play relative to the individual they replace, and the overall play of the line while they are in line with the thought that perhaps the Notre Dame coaches realize mistakes have been made and that a course correction is in order.

A Notre Dame fanbase that has grown quite accustomed to excellent team defense during the past four seasons must be less than enthused with what has been witnessed thus far. Big plays occurring at a faster clip than in the recent history of Notre Dame football, fourth-quarter surrendering of points, and the use of what has been an abysmal three-man defensive front system are all cause for concern. However, the Notre Dame defensive personnel is too talented to play this poorly against weak competition.

This week Coach Kelly indicated that things would be simplified for his defensive personnel. In this game, look for a simplified defensive system, the extent to which the three-man defensive front is utilized, and whether (and how) the defensive system changes should Notre Dame have a substantial lead during the fourth quarter.

Putting the Game Away

Notre Dame had multiple opportunities for both the offense and defense to put away their opponent in the Florida State and Toledo contests. However, should Notre Dame gain the advantage with the opportunity to put the game away in the second half, watch for whether the Irish coaches again become conservative with their calls and whether the three-man defensive front makes a return.

The Notre Dame coaching staff fully planned on playing Tyler Buchner against Toledo last Saturday. In the end, they needed him. Buchner started his Notre Dame career by taking over the Notre Dame offense inside their own five-yard line in a close game. He subsequently led Notre Dame on a 96-yard touchdown drive doing much of the work with his legs, including a 26-yard scramble on his first play.

Notre Dame coaches, players, and fans alike want a successful 2021 season, and changes are required to make that happen. Some of those changes are listed above, and some are obvious to even the lay observer. However, these changes must be made by coaches, and coaches have egos. Sometimes coaches can let those egos can get in the way of making the necessary changes. So, in a broader sense, what should be looked for in the game against Purdue are signs that the Notre Dame coaching staff can put their egos aside, make the changes necessary to right the ship, and put the kids of the Fighting Irish football team in better positions to be successful.

Podcast: Will Notre Dame Play to Potential And Make Us All Happy vs. Purdue? 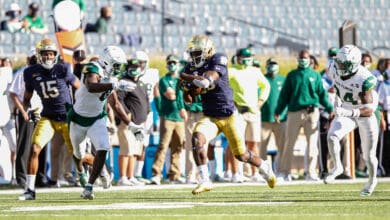 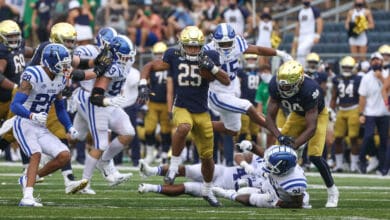