So far this year I’ve been writing a “What to Watch For” piece prior to the games, and given how much I enjoy writing about it, I think I’ll keep it going. As a compliment, I think I’ll throw in the natural response, which is what we saw from the actual game.

There is always a tendency to throw away whatever we see against an opponent like this, and sometimes that’s true, but I don’t think it is in this case. Notre Dame wasn’t fluky in the way they went about their business on Saturday against the Bulls. It was all pretty basic, and things the Bulls would have been prepared for. They ran their zones, they ran out their tight ends, the used multiple backs. And in so doing they dominated an opponent who knew what to expect. That’s not nothing. It doesn’t mean they are ready to be title contenders, but it means they can execute the things they want to do and that’s a start.

They also did it amidst the uncertainty of who will actually be taking part in the game, with starting Buck linebacker Jack Kiser learning he’d be starting after being on the scout team earlier in the week, then leading the team in tackles.

In the first contest, Notre Dame ran 29 straight drop back passes to eight screens or play actions. The former averaged 4 yards per play, the latter 17.5.

This week was far more balanced, with 11 straight drops (2.9 ypp) and 10 play actions or screens (13 ypp). Given these numbers, I’d like to see an even bigger discrepancy between straight drops and play action passes, but it was a move in the right direction.

As I laid out in the preview piece, play action uses their running game to compliment the passing game, especially because Notre Dame loves to incorporate their tight ends so much. They can go heavy and still throw the ball with some of their most dangerous weapons, Tommy Tremble and Michael Mayer. And because the running game is such a credible threat and action towards the run demands respect. For those of who are into this sort of thing, this was very much the game plan of the late 80’s and late 90’s Holtz teams.

The Defense Is In Fact Deep

Prior to this week I wanted to see how deep this defense really was and this was before I knew #1 and #2 at Buck were going to be out, the starting field corner, a backup defensive end, and the starting super star safety. Well, in conclusion, we are deep pretty much every where. The team leaders in tackles turned out to be the guy (Jack Kiser) who ended up starting at Buck and Houston Griffith, who ended up starting for the injured Kyle Hamilton. The team leader in passes broken up, with three, was freshman corner Clarence Lewis who replaced starter TaRiq Bracy in the starting lineup. Second on the team in passes broken up was corner Cam Hart, who played the most snaps at boundary corner after starter Nick McCloud exited after just 14 plays. The stars of the game were all backups, a pretty good sign your defense has some teeth to it.

We also saw freshman defensive ends Jordan Botelho and Alexander Ehrensberger make plays, in the case of the enormous German long before we thought we’d ever see him on the field.

At no time has depth on the team been more valuable than it is this season, when any player can be lost for the week and the week after pretty much any time prior to kickoff.

Chris Tyree Has Got Some Stuff For US And So Does C’Bo!

I figured this would be a heavier carry game for Tyree given they wouldn’t want to run Kyren Williams into the ground, but the bulk of the carries went to Flemister, who didn’t waste them by any means.

No fear though, Tyree made the most of his opportunities, with his first career touchdown run and some nifty running on a 30 yard play that wasn’t a part of the arsenal in the back field last season.

We heard how willing Tyree was to run inside and he has shown that so far this year, even cutting upfield into traffic when he had the option to try and win a race outside. His role is bound to expand as the season goes on and he gets more comfortable, but with Williams looking more than capable to shoulder the load as the number one back, Tyree has time to grow.

The pleasant surprise was Flemister, who didn’t show anything like this last season, and we can adjust for opponent if we want, but vision, cuts, and toughness are what they are against any opponent. Given his performance, and what we saw from the line all day, this is a running game the team can build off of.

From Scout Team to Game Ball: Notre Dame's Jack Kiser Had a Week

5 Things I Liked in Notre Dame's Shutout of South Florida 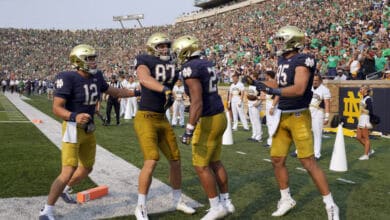 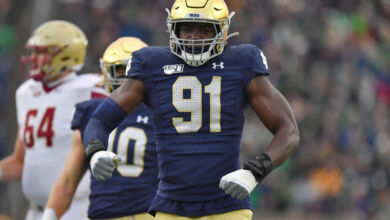