On January 1st, Marcus Freeman and the Fighting Irish will have an opportunity to win a New Year’s Six Bowl Game for the first time since 1994. Oklahoma State and Mike Gundy will be a formidable, top-10 opponent on New Year’s Day. There is a lot of anticipation for the new era of Notre Dame Football and fans across all of college football will be tuned into this first gridiron clash between the Fighting Irish and Cowboys to start the new year.

Mike Gundy looks for a repeat of the 2012 Fiesta Bowl. The last time the Cowboys won the Fiesta Bowl back in 2012, it was an overtime thriller against Andrew Luck and the Stanfor Cardinal. Historically, Mike Gundy’s teams have been led by high-powered offenses and future NFL receivers. But this season, his 11-2 Cowboys have been led by stellar defensive play.

The Cowboys will be without defensive coordinator Jim Knowles. Oklahoma State has one of the best defenses in the country, holding opponents to only 17-points per game. The Oklahoma Sooners were the only team all season to score over 30-points against the Cowboys this year (33-points to be exact). Certainly, the players will still be on the field, but losing Jim Knowles to Ohio State hurts for the Fiesta Bowl.

Jaylen Warren is the leading rusher for Oklahoma State, while Tay Martin is the standout wide receiver. This year Warren has 237 attempts for 1,134 yards (4.8 yards per carry) with 11 rushing scores. While Martin has 70 receptions for 942 yards with 7 receiving touchdowns.

Marcus Freeman will get his first opportunity as a head coach. It will be a contrast of two coaches in the Fiesta Bowl. Mike Gundy has been the head coach in Stillwater since 2005, while Coach Freeman will be making his head coaching debut. One game will not define Marcus Freeman’s career, but a victory on Saturday would be an excellent start.

Kyren Williams and Kyle Hamilton will not play in the Fiesta Bowl. Notre Dame’s Defense has had time to adjust without Hamilton. In fact, they only gave up two touchdowns during the last four games of the season. The absence of Kyren Williams worries me the most. Notre Dame has relied heavily on his rushing, catching, blocking, and overall impact on the field.

There is a lot of talent in the Irish backfield, but Kyren Williams is irreplaceable.

The Irish desperately need a New Year’s Six Bowl victory. The last time Notre Dame won a major bowl game Lou Holtz was the head coach and I was not even born, so it has been a long time. The narrative is overexaggerated though because the program has been in a national championship game and had two playoff appearances in the last decade.

All three contests ended in losses to the eventual national champions. For instance, Notre Dame lost to Alabama by 17-points last year but could have played Iowa State in the Fiesta Bowl and likely would have won by the same margin, thus ending the New Year’s Six Bowl drought. But skeptics can make their own judgements and the Irish are in a great position to silence critics on Saturday.

Notre Dame Offense vs. Oklahoma State Defense: The Fighting Irish are averaging 35-points per game, while the Cowboys are allowing 17-points per contest. Mike Gundy’s team only surrendered 24-points to the Baylor Bears in the Big 12 Championship Game (even with their offense giving up 4 turnovers).

Tommy Rees will have his hands full with the absence of Kyren Williams and a lot of youth on the field. There will still be talent for the Irish to use, but Oklahoma State has the advantage.

Marcus Freeman’s unit has the distinct advantage in this matchup. Both defenses will be highly favored in the Fiesta Bowl.

Special Teams: Oklahoma State’s kicker Tanner Brown is 14 for 17 this season with a long of 49-yards. Conversely, Jonathan Doerer is 16 for 20 with a long of 51-yards.

There is no distinct advantage in this category.

On paper, this matchup looks like it will be a defensive battle on New Year’s Day. This preview feels like the Notre Dame Cincinnati game. First, this will be another top-10 showdown, and secondly a defensive battle is anticipated. Turnovers will be the key to victory for both programs. In Notre Dame’s loss to the Bearcats, they had 3 turnovers, while in Oklahoma’s State loss to Baylor they compiled 4 turnovers.

My prediction is going to be different without stars Kyle Hamilton and Kyren Williams, but I still believe the Irish will get it done. Both defenses are elite, but Notre Dame has the better offense. The entire Oklahoma State fan base and program will be ecstatic to face the Fighting Irish for the first time.

However, the Notre Dame players will also be energized after the departure of their head coach and they will want to finish strong for their new head coach Marcus Freeman, who stuck with them. I have Notre Dame winning the Fiesta Bowl by ten points. 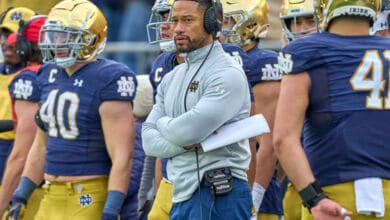 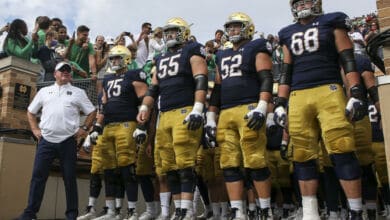