The abrupt departure of Brian Kelly and quick elevation of Marcus Freeman as Notre Dame’s new head coach quickly overshadowed the Fighting Irish’s near-miss of a college football playoff berth. While they won’t be in the hunt for a national title, a tough Fiesta Bowl challenge against the Oklahoma State Cowboys will close out the 2021 Notre Dame football schedule.

The Cowboys literally missed their own playoff spot by inches in the Big 12 title game and enter this contest with an 11-2 record. Head coach Mike Gundy is in his 17th season at Oklahoma State, with all but his first campaign ending with winning seasons. This matchup will mark the first-ever meeting between the two schools.

Coan has been a consistent presence behind center for Notre Dame, throwing for 2,641 yards and 20 touchdowns. He makes few mistakes, largely because of his accuracy that’s resulted in a completion percentage of more than 70 percent in six of the last seven games. In all 11 Irish wins this season, he’s managed to throw at least one scoring pass, with his lone shutout in that category coming in the loss to Cincinnati.

The Cowboys have a solid defense that knows how to get to the quarterback, though they can be vulnerable to the pass. Their midseason defeat at Iowa State was due in part to allowing a season-high 307 yards through the air. Both Oklahoma and Baylor were also able to find the end zone with their respective passing attacks, notching three touchdown passes apiece.

The Irish enter the Fiesta Bowl having allowed just 23 points in their last four contests. While those four games admittedly came against weaker opponents, the Notre Dame pass rush has been a force all season long. Led by Isaiah Foskey, this unit needs to deliver pressure while also maintaining awareness of the Cowboys’ rushing game. The latter aspect is especially true, since Sanders is their second-leading rusher with 543 yards.

Sanders is completing his third season as Oklahoma State’s quarterback and has connected on more than 60 percent of his passes during that span. The Cowboys have one of the better offensive lines in college football, but Sanders has had issues when it comes to turnovers. His 12 picks nearly match his 16 scoring tosses, so bringing the heat is a necessity for the Irish.

With Kyren Williams opting out of the game, Tyree is likely to be the top candidate to try and match Williams’ high level of production. Tyree’s numbers dipped this season, though he averaged 8.8 yards per carry in five carries against Stanford. He also showed his speed earlier in the year with a kickoff return touchdown against Wisconsin.

Rodriguez might be undersized at 5-11, but that doesn’t stop him from constantly being around the ball. He leads the Cowboys with 118 tackles, with 16 of those stops behind the line. A former high school wrestling champion who started out as a safety, Rodriguez hits hard enough to have forced four fumbles this season and recover two–one for a touchdown.

White’s gritty approach to the game has been evident during his efforts to play with a torn patella cruciate ligament. He’s an under-the-radar asset who isn’t known for flashy play, but usually manages to get the job done. He’ll get help in this matchup from Bo Bauer, who’s back after getting tossed for targeting against Stanford.

Warren will return after injuring his ankle early in the Big 12 championship game, an absence that might have meant the difference in that close contest. He’s gained 1,137 yards on the ground and scored 11 touchdowns. He’s also grabbed 19 passes in his first year with the Cowboys after transferring from Utah State.

Josh Lugg’s knee injury elevates Blake Fisher and puts a pair of true freshmen in both tackle slots. Fisher hasn’t played since suffering a torn meniscus in the opener, but came in as one of the Irish’s top recruits. He’s got the size to compete but could be rusty against a strong Oklahoma State pass rush. In addition, his limited collegiate game experience is potentially a major concern

Martin is set to close out his fourth season in Stillwater, with 38 tackles and one fumble recovery to his credit in 2021. Fisher needs to negate Martin’s success when it comes to getting into enemy backfields. This season, Martin has 12 stops behind the line and has notched seven sacks, numbers that ratchet up the pressure on Fisher. 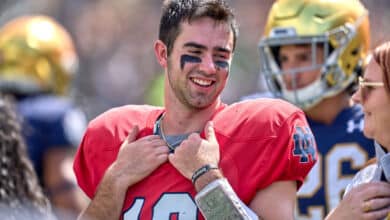 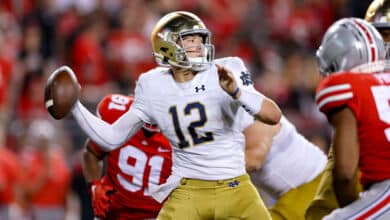 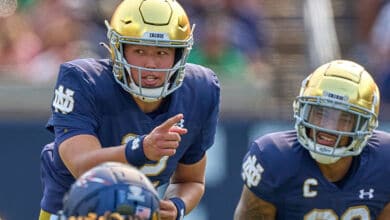