Notre Dame returns to action for what feels like the first time in about five years, even though it’s only been five weeks. Under the guidance of Marcus Freeman, who is making his head coaching debut today, the Irish take on Oklahoma State and their stout defense in the Fiesta Bowl, looking to snap one of the more embarrassing streaks in Notre Dame football history. Will they do it? Let’s dive in.

What Worries Me this Week

Injuries on the OL. Blake Fisher is a freak of nature. Most true freshmen wouldn’t be ready to start already after a significant injury like the one he had. Most true freshmen aren’t ready to start at left tackle in week one of a season either. That said, the loss of Josh Lugg for this game worries me simply because Fisher hasn’t played in almost four months. In a vacuum, Fisher is probably more talented than Lugg at this point, but games aren’t played in a vacuum.

First game snafus from Marcus Freeman. Coaching the first game of your career as a head coach in a New Year’s 6 Bowl against a top-10 team isn’t what I’d call a low-stress environment. Freeman is getting thrown right into the fire. Like with Fisher, expect some mistakes and remember that before freaking out too early.

What kind of mistakes could we see? Late decisions on punt/4th down situations, misused timeouts, interesting 2-point conversion attempts, general clock management issues, etc. The good news here is that even with Brian Kelly’s “87 years of experience” or however many he had, he wasn’t strong in any of those departments either. Still, expect Freeman to have some growing pains with the new position.

Jack Coan having time to pass. I don’t think we’ll see a full return of Coan getting sacked six or seven times as we saw at the beginning of the season, but Oklahoma State has the kind of defense that could harass Coan all day. If Notre Dame tries too many slow-developing plays that require pass protection to hold for too long, it could be a long day for Notre Dame. I have faith in Rees not to dial-up too many of those, but the Ok State defense versus the Irish offense does not favor Notre Dame from a matchup perspective.

Loss of Kyren Williams as a runner. Kyren Williams is a cheat code. He’s a video game-style running back, and he will be a high NFL Draft pick all for a reason. That said, I am not as worried about his loss today when running the ball as I am in other areas. Sure, there’s bound to be at least one third down that one of his replacements fails to convert that Williams would have made easily, but overall between Chris Tyree, Logan Diggs, and Audric Estime, Notre Dame has a lot to work with.

I expect Diggs and Tyree to split the carries pretty evenly, with Estime chipping in maybe five or six of his own. Tyree is finally back to 100% after his turf toe injury and is ready for liftoff.

Oklahoma State losing their DC. I wrote about this on the boards, but I don’t think the loss of Jim Knowles for Oklahoma State got talked about enough. Remember five years ago when Oklahoma State was a high-flying offense that couldn’t stop anybody? Jim Knowles is the DC who changed all that. He isn’t coaching for Oklahoma State today since he was hired away by Ryan Day to run the Buckeye defense. That’s a massive loss for the Cowboys.

The guy who was the architect of the game plan each week for a defense that finished the season ranked 2nd nationally was not there to create this game plan. The guy who called blitzes at the right time all year for a defense that led the nation in sacks won’t be calling plays today. Sure the players are the same, and the playbook is the same, but if there isn’t a dropoff from the Oklahoma State defense, Ohio State would have never hired Knowles to run to their defense.

Spencer Sanders having a big game. The Oklahoma State quarterback can be a little Jekyll and hyde, but he’s been mainly hyde in big games. He threw four interceptions versus Baylor in the Big 12 championship after throwing three against them in their first meeting. He finished the season ranked 112th nationally in interceptions.

Sanders has talent and can make big plays, but the Notre Dame defense should frustrate him. Luckily for the Irish, Cam Hart’s thigh bruise earlier this week is not expected to cause him to miss the game. With Hart back there, Notre Dame’s secondary, even without Kyle Hamilton, could have one of its better days this year. I don’t expect Sanders to be as generous as Graham Mertz was in September, but he will put some balls in the air the Irish secondary will have a chance to come down with.

Loss of Kyren Williams as a run blocker. I think Notre Dame misses Kyren the most today in the pass blocking department. Williams is an elite pass blocker at the running back position. Part of the stabilization of the line also meant Williams was staying in the backfield more to block. Chris Tyree is a pretty good blocker, but he’s not on Williams’s level just yet. Still, expect to see Tyree almost exclusively on third downs for Notre Dame.

Even without Knowles calling the shots, the Oklahoma State defense will pose problems for the Notre Dame offense today. We’ll learn if the 2nd half resurgence was just a result of playing bad defenses or if the Irish really did find their way.

I have gone back and forth on this game for weeks, but as we approach kickoff today, I am feeling relatively confident that Notre Dame will score enough points to win this game. There will be some frustrating moments – Oklahoma State has a great defense that frustrates even the best offense. In the end, though, I think Notre Dame manufactures enough points, and the Irish defense creates enough turnovers to keep Oklahoma State off the scoreboard for most of the day. I expect a close, ugly game that Notre Dame puts away late just as they did against Wisconsin.

Frankie V’s Prediction: Will Notre Dame Have to Slow Down Virginia Offense? 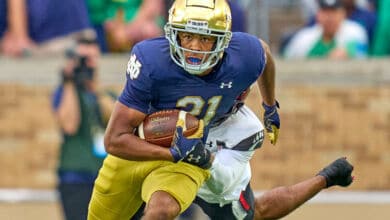