When Marcus Freeman was named the head coach for the University of Notre Dame in December, a lot was made about the players’ support not just for Freeman but for saving the program’s culture versus bringing in an outside hire who would seemingly look to install their own culture. The players’ voices were heard by the administration, including AD Jack Swarbrick. A month later, their actions spoke louder than words when player after player announced their return to Notre Dame even with other, sometimes more lucrative options, were available to them.

“I met with them this morning, and I was reminded of that and reminded of the fact that the culture built in this program isn’t Jack Swarbrick’s culture, it’s not Brian Kelly’s culture, it is the culture built by those young men and especially the leaders of that team,” Swarbrick said on the morning of November 29 just hours after Brian Kelly professed his “limitless” love for his former players in a three-minute goodbye speech.

“I am most indebted to them for what they’ve built, and they have my commitment that I will ensure that nothing that they’ve built will be diminished or lost as we move this program forward in the weeks, months, and years ahead,” Swarbrick added.

That same morning, Kelly left campus before sunrise after addressing a room full of players that were no longer his. Yet, despite Kelly abruptly leaving Notre Dame and subsequently making a fool of himself in Baton Rouge with fake accents and cringeworthy recruiting videos all after making public statement after public statement that implied the players he left behind weren’t good enough to win a national championship, the culture of the program remained.

The most bizarre part of the last seven weeks of Notre Dame football has been that the same coach who left in the middle of the night without any warning to his players or staff who sat in a recruit’s home and apparently stuffed his face with three helpings of BBQ all while knowing he was going to be leaving Notre Dame that night somehow managed to build a program with a culture strong enough to withstand the upheaval Kelly bestowed upon that week.

“What they (the players) insisted I understand was that they had built the best culture in college football,” Swarbrick said a week later before introducing Freeman.

“They also wanted me to know that they owned that culture. They built it. It was theirs. And their message. stated clearly and convincingly, was, ‘Jack don’t screw this up’”

“I got the message,” Swarbrick said. “In short, they convinced me that I two separate tasks in front of me. One was to select the best possible coach to lead the program. The other was to protect the culture they had built.

During the Freeman hiring process a lot was written about the players wanting to maintain the culture they’d built.

When you watch these decisions to return, you know they *really* meant that.

Over the first two weeks of the year, Notre Dame saw almost every single 5th-year or NFL decision go the way they wanted it to. Only one prominent player with eligibility, Kevin Austin, decided against returning to Notre Dame for another season.

Isaiah Foskey would have been a pretty high pick in April if he had left. Maybe not a 1st rounder, but a high selection. Instead, he decided to return for one more year at Notre Dame. Following Mike Elston’s departure last week, Foskey tweeted the following.

Everything happens for a reason. The Best is yet to come✊🏾

Wide receivers Avery Davis, Joe Wilkins, and Braden Lenzy. All back. Linebacker Bo Bauer? Check. Safeties Houston Griffith and DJ Brown. All in. Josh Lugg for a 6th year despite maybe not having a definite spot in the starting lineup? Yeah, him too.

And that is one of the amazing aspects of all of these returns. Many of them aren’t 100% locked into starting spots with some of the younger players on the roster, yet they’re coming back instead of entering the transfer portal or just moving on with their lives if maybe the NFL isn’t in the cards. A few players have entered the portal since the season ended, but that will happen every year. The players who have entered, for the most part, weren’t significant contributors in 2021 and are looking for fresh starts, with the lone exception being Jay Bramblett, but it had long been reported that Bramblett would be transferring to be closer to home.

When Kelly chased his bag to LSU under the guise of wanting to “coach the best players” and have the “best facilities,” it all could have collapsed on Notre Dame the way it did for Oklahoma when Lincoln Riley decided the SEC was going to be too tough to coach in and left for sunny California and the Pac 12. The players admitted they were worried it would happen on the Inside the Garage podcast and later spoke with relief when the dominoes fell the way they did.

“It was the protection of the culture that led me to make the unusual decision to make a commitment to our director of performance, Matt Balis. That regardless of who became the head coach, he, the administer of culture if you would, would stay in his position,” Swarbrick said. Player after player echoed Swarbrick’s sentiment of how important Balis was to maintain the culture they built. Kelly knew how important Balis was to it, too and that’s why he reportedly wanted Balis to follow him. Balis, instead, decided to be the first domino to fall for Notre Dame.

Next up was Tommy Rees. “It was the same motivation that caused me to begin parallel negotiations with a critical of this team and this culture, Tom Rees, before I knew for sure who the head coach would be.”

The Notre Dame quarterback room started tweeting out #PayTommyRees before the news broke that Rees would be back. And by all accounts, Rees was very close to following Brian Kelly before he decided on returning to Notre Dame.

Since the initial glow of the return of most of the coaching staff wore off a bit with the Elston and Taylor departures, but neither of them followed Kelly the way a lot of Oklahoma’s staff – and roster – followed Riley to Oklahoma. The Sooner to Southern Cal exodus proved that Oklahoma didn’t necessarily have the same kind of culture built within its program that Notre Dame did.

Winning the off-season and winning all of these re-recruitments won’t win a single game on its own this fall for Notre Dame, but it speaks volumes to the commitment and ownership that the players at Notre Dame have in the program. If that doesn’t exist, there’d be more Notre Dame players in Baton Rouge right now. If it doesn’t exist, there would be much larger questions for Marcus Freeman to answer than who is running backs coach or defensive coordinator would be.

There’s been a lot of chatter this week about how “we were promised continuity” by hiring Freeman after the departures of Elston and Taylor, but guess what? You got it. The culture that existed in the program on November 27, 2021, still exists and is as strong, if not stronger, than it was then.

Notre Dame’s coaching staff will have some new faces in 2022 for sure, but the Irish aren’t starting over with a new head coach. Instead, they’re building off the foundation that installed a culture that survived the sudden departure of its head coach even when the team was still alive for a playoff spot. The players proved that the program has continuity with their actions over the first two weeks of the season. They weren’t just talking about the culture they built. They showed they were invested in protecting it. In September, we’ll find out if that investment will return dividends for them and the Fighting Irish. 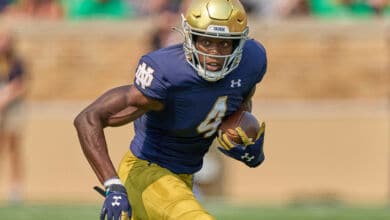