The New Jersey, sorry, New York Giants made a run at new, yet to be announced, running backs coach Deland McCullough this weekend. Like most attempts at anything football-related over the last decade by that franchise, their attempt was unsuccessful. According to Irish Illustrated, McCullough rejected the Giants’ offer and will stick with Notre Dame.

Landing Deland McCullough last week was a big win for Marcus Freeman and Tommy Rees. McCullough is one of the best running backs coaches in the country and, much like Lance Taylor a few years ago, seen as a future OC and potential head coach down the road. It’s no surprise that he had other suitors this off-season – specifically from NFL teams after his successful stint as the RB coach with the Kansas City Chiefs.

With more and more rising-star, up-and-coming type coaches on the staff, Notre Dame fans will have to get used to some more staff turnover than we’re typically used to. Losing McCullough before he started obviously would have been bad, but situations like that come with the territory when you target the best assistants. No one comes gunning for bad assistant coaches.

The Giants’ unsuccessful attempt at luring McCullough back to the NFL does highlight a significant challenge for Freeman, though. He will have to balance having a staff full of rising stars who all have higher aspirations with providing some continuity on his staffs year to year. Losing coaches like Taylor and John McNulty for OC jobs will happen when you have a good culture in place that attracts top talent. Freeman will, however, need to balance the staff he builds with the need to provide stability year to year.

For today though, Freeman gets a nice win by retaining McCullough and not starting the search for an RB coach all over again. Keeping McCullough is no small accomplishment either. The Giants were set to make him the highest paid running backs coach in the entire NFL according to Bruce Feldman.

There was also some smoke over the weekend that Miami was making a big run at Rees, but on Sunday morning, the Hurricanes hired Michigan OC Josh Gattis away from the Wolverines, eliminating any of those fears. Jim Harbaugh, who flirted with the NFL before learning that there wasn’t actually an offer for him to accept with the Vikings before returning to Michigan and professing his love, now has to replace both of his coordinators head into the 2022 season.

We are still waiting on a defensive coordinator to be named, but all indications are the hold up is related to waiting for Al Golden and the Cincinnati Bengals to conclude their season before he officially interviews. That isn’t to say that its a lock Golden will be named to the DC immediately following the Super Bowl, but rather the process has been delayed as Notre Dame waits for Golden before it moves forward in any direction.

For today, Notre Dame fans can rest a bit easier knowing that, at least for the moment, there is still just one open position on Notre Dame’s staff. 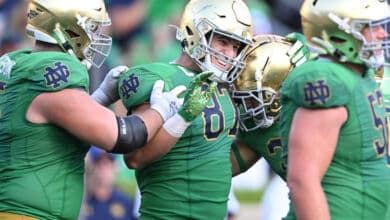