Following successive recruiting classes with underwhelming numbers at the wide receiver position, it’s been assumed for a while Notre Dame would pursue receivers in the transfer portal. To date, that hasn’t happened, but according to the Athletic’s Pete Sampson, that could change after Iowa wide receiver Charlies Jones entered the portal yesterday.

Iowa fans Jones’s move to the transfer portal as a big loss for the Iowa offense.

It’s hard to overstate how much he meant to this team last year, particularly given the lack of offensive production. It seemed that a spot in the NFL was a large driving factor for Jones returning for another year of college.

Reading between the lines of that and the timing of this transfer, it sure seems like Jones went through spring practice, saw that nothing at all was going to change about the offense and his use rate, and decided to seek out greener pastures.

Notre Dame ended spring with just seven scholarship wide receivers – Braden Lenzy, Avery Davis, Joe Wilkins, Jayden Thomas, Chris Salerno, Deion Colzie, and Lorenzo Styles. Of that group, Davis is recovering from an ACL injury, Wilkins missed the spring with a lisfranc injury, and Salerno is a former walkon. Not the best of depth charts we’ve seen at Notre Dame in a while. Adding a receiver like Jones would not only be welcomed but feels necessary.

Jones had modest success as a receiver in Iowa’s run-first, second, and sometimes third offense hauling in 21 passes for 323 yards with three touchdowns last season. That output was good enough for fourth on the Hawkeyes. He was, however, recognized as the best return man in the nation after returning 38 punts for 285 yards and 23 kickoffs for 635 yards with a touchdown. Notre Dame’s woes in the punt return game have been well documented over the years.

Notre Dame needs more able-bodied receivers before the season. Starting the 2022 season with just four fully healthy receivers who came to Notre Dame on scholarship initially is not a recipe for success. In a perfect world, the Irish would add two more receivers, but the challenge with their current situation is that the top of the depth chart is pretty solid making Notre Dame a less appealing destination for a receiver looking to start.

2022 will be Jones’s 6th season of college football after he used the additional year granted by the NCAA for the 2020 COVID impacted season so it would make sense if depth charts played a major role in his decision. As such, Purdue is rumored to be the very early leader in the clubhouse. New wide receivers coach Chansi Stuckey and offensive coordinator Tommy Rees would be wise to try and insert themselves firmly in the recruitment of Jones though given Notre Dame’s perilous depth heading into the season. 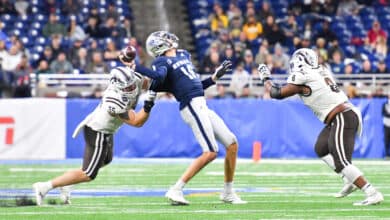