Dabo Swinney and the Clemson Tigers will travel back to South Bend for the first time since their 2020 historic showdown with the Irish. The Notre Dame Football season has had its ups and downs this fall, but Marcus Freeman has an opportunity to build off last week’s momentum and gain a signature victory. It will be a primetime showdown on Saturday Night as the Irish play host to the #5 Clemson Tigers.

The current GameDay forecast shows a 20% chance of rain with a high of 65 degrees and low of 55.

The Tigers are seeking their 7th playoff appearance. Even though this may not be the best Clemson team that Dabo Swinney has coached, this group is on the top teams in the nation with loads of talent. However, unlike the Clemson teams in the past that blew out their competition, the 2022 Tigers have been on the verge of defeat.

Dabo Swinney’s group beat Syracuse at home by 6-points and Florida State on the road by 6-points. Notre Dame is undoubtedly the toughest obstacle left on Clemson’s schedule.

Quarterback D.J. Uiagalelei leads the Clemson Offense. This season, Uiagalelei is 150 for 234 (64%) with 1,803 passing yards, 17 passing touchdowns, 4 interceptions, and 12 sacks taken. On the ground, the Clemson Quarterback has 89 attempts for 350 yards (4 yards per carry) with 4 rushing scores. His top receiving targets are Antonio Williams and Joseph Ngata.

Williams has 29 receptions for 364 yards with 2 touchdowns, while Ngata has 20 catches for 324 yards and 1 touchdown. The Tigers rushing attack is headlined by former Notre Dame recruiting target Will Shipley who has 123 attempts for 739 yards (6 yards per carry) with 10 rushing scores.

The Fighting Irish dominate the #16 Syracuse Orange. Notre Dame continued their extraordinary play on the road with a powerful rushing attack against a tough Syracuse Defense. After a dreadful loss to Stanford and dull victory over UNLV, Tommy Rees took the offense back to their strength in the trenches.

There certainly are countless areas for improvement, but Notre Dame was able to easily handle a top-20 opponent in a hostile environment. The most disappointing aspect of this season is how the Irish play to the level of their competition, and hopefully they can rise to the occasion against Clemson.

Can the Notre Dame Offense score enough to beat Clemson? Looking back, Syracuse was ahead of Clemson on the road by 14-points, while the Irish destroyed the Orange and won by 17-points on the road. Just based on those facts alone, Notre Dame absolutely has a chance to win this weekend.

Although the Irish Offense produced 34-points against Syracuse last week, Drew Pyne only went 9 for 19. Pyne will need to do even more this week if Notre Dame wants to pull off the upset. Audric Estime, Logan Diggs, and Chris Tyree powered the Irish to 246 rushing yards. This rushing attack paired with a better performance in the passing game will be enough to beat Dabo Swinney’s team.

Al Golden’s Defense must play at an elite level. Last week, Syracuse went 4 for 13 on third downs, and 0 for 2 on 4th downs. The Fighting Irish have played their best defense on the road against elite offenses like Ohio State and North Carolina. Now the defense needs to bring the same energy back to South Bend.

I believe Clemson will play their most inspired football game of the year, as they always seem to rise up in big matchups during the Swinney era. The Tigers will try to play physically with Uiagalelei and Shipley on the ground. Notre Dame has faced better offenses than Clemson all year, but the type of physicality they bring will be an adjustment.

The Clemson Tigers have the advantage in this category,

Clemson Offense vs. Notre Dame Defense: The Tigers Offense is averaging 422 yards per game, while the Fighting Irish Defense is allowing 335 yards per contest. Clemson has scored over 30-points in 7 of their 8 games this season, but they have yet to face a defense like the Irish. The last time D.J. Uiagalelei came to South Bend and put up 439 passing yards, but do not expect such a performance this time around.

The Irish have the advantage in this matchup.

If I were drafting this article a week ago, I would have picked the Clemson Tigers. However, the “road version” of Notre Dame Football showed up against Syracuse. I do not think Clemson is overrated, but they do not look like the team that would wreak havoc in the playoffs.

Notre Dame needs to play up to their potential at home this Saturday. The rushing attack has had great performances several times this season, but the passing attack rarely looks strong. Drew Pyne does not need to play perfect, but he must hit a few key throws down the field, as well as use his legs more when necessary.

With the inconsistency of Notre Dame Football this year, predictions have been problematic. Both teams will want to play physical, and the game will come down to quarterback play and turnovers. I believe that Tommy Rees will call a quality game, and Drew Pyne will do just enough to lead the Irish to victory. 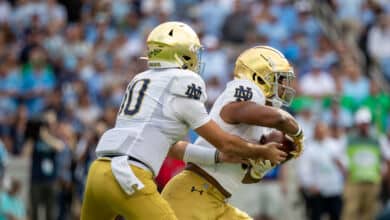