An explosion of 37 points during the first half allowed the Notre Dame Fighting Irish the opportunity to coast to a 44-0 win over the Boston College Eagles on Saturday. The final margin for the home swan song conceivably could have been worse had Marcus Freeman exploited the opportunity. Instead, a combination of good sportsmanship and a snow-covered field after the break made the decision for him.

Boston College did put together one concerted effort to get back in the game after falling behind 17-0. A 39-yard pass play put them in a position to immediately try another attempt to dent the Irish defense. However, that was canceled out by the second of three interceptions by Benjamin Harrison, effectively ending the game.

Below are some of the key aspects of the game:

Notre Dame entered this contest as a three-touchdown favorite, a status that could have caused them to look ahead to next week’s matchup against Southern Cal. Instead, that notion was dispelled by the Irish scoring all of their points in their first eight possessions and holding a 37-0 halftime lead.

The tone was immediately sent when Logan Diggs broke off a 51-yard run on the first play from scrimmage and helped Notre Dame take a 10-0 lead with just five minutes gone. When Irish drives stalled out, kicker Blake Grupe managed to kick a trio of field goals under frigid conditions. The defense also did its part by forcing BC to cough up the ball.

A major reason for the ease of the victory stemmed from the first-half turnovers that led to 20 points for Notre Dame. The Irish collected a pair of interceptions to account for the first 10 of those points, followed by two fumbles. In all but one of those cases, the Irish scoring tally was aided by taking over in Eagles territory.

Both of the interceptions were collected by standout freshman Morrison, marking the second time in three weeks that he’s had multiple picks in a game. Harrison later completed the hat trick with another interception after the break. The first fumbles came in the midst of a heavy rush, with Isaiah Foskey jumping on the ball for one, while a botched lateral recovered by Marist Liufau accounted for the other.

Running Them Into the Ground

The deteriorating weather would have undoubtedly forced both teams to rely on their ground games, even if the game had been closer. Yet, Notre Dame established their potent running game at the outset and finished with 281 yards on the ground. One indication of just how dominating the Irish were in that department during the first half can be seen by their rushing advantage: 214-1, with the Eagles finishing with 56 yards on the day.

Four of the five Notre Dame touchdowns came on runs, including two by Audric Estime and one by Chris Tyree, who combined for 121 yards on 17 carries. That total yardage was one short of Diggs’ production of 122 yards on 15 carries, with the aforementioned opening-play run doing most of the damage.

The quick arrival of garbage time allowed Freeman the luxury of inserting players who haven’t seen the field for much of this season. That group included linebackers Jaylen Sneed and Junior Tuihalamaka, with Sneed finishing the frigid afternoon as one the leading tacklers for the Irish. Also, defensive linemen Aidan Keanaaina and Alexander Ehrensberger got their opportunity to compete.

On offense, freshman running back Gi’Bran Payne made a cameo appearance with two carries for five yards. That small sample and the circumstances surrounding his appearance don’t offer any type of indication of what he might do in the future. Still, getting on the field is the obvious first step toward making an impression.

Going Out in Style

In what was undoubtedly their final appearances at home for Notre Dame, the duo of Michael Mayer and Isaiah Foskey each offered a glimpse of their body of work with the Irish. Not surprisingly, both players are destined to be early selections in the NFL draft next April.

Mayer had five catches for 64 yards, the 20th time at Notre Dame that the big man has reached or gone beyond that catch threshold. For Foskey, his one sack put him at the top for career sacks among Irish defenders, surpassing Justin Tuck with the 25th takedown of his collegiate career.

Notre Dame closes out their regular season with the renewal of another rivalry–this one against the Southern Cal Trojans. The Irish will make their first trip to Los Angeles since 2018 after the 2020 contest was a pandemic-related casualty. Notre Dame has the upper hand in the series with a 50-37-5 overall mark and has won the last four meetings. Southern Cal last won in 2016, capping a disastrous season for the Irish. Under new head coach Lincoln Riley, the Trojans have once again developed into a powerhouse with a 10-1 record. 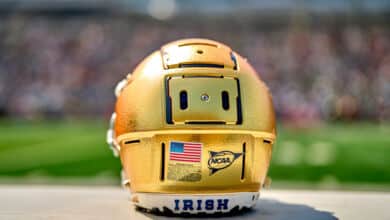