Notre Dame returns to the field for the first in a month, even though it feels like it’s been much longer than that in the Gator Bowl. The Irish will be without some of its stars, but their opponent, South Carolina, had its roster decimated by defections since season’s end. Nevertheless, Marcus Freeman looks to guide the Irish to their first bowl win since 2019 and cap off his up-and-down first season with a win. Will he be able to, though?

Instead of my usual format, I figured I’d just list out what I’ll be watching for since I missed a lot of game prediction posts this season anyway.

For all of the talk of who isn’t playing in this game, there hasn’t been enough talk about who IS playing this game for Notre Dame – its entire offensive line. Jarrett Patterson could have sat this out. He’ll be preparing for the NFL Draft shortly after the season ends and played through pain all season after his injury in fall camp. No one would have faulted him for not playing and focusing on getting back to 100%. He’ll be out there tomorrow, though. So will Josh Lugg in his final game in a Notre Dame uniform.

Notre Dame’s starting OL tomorrow started the last 11 games together, and the only game missed all season by any member of the line was Patterson in the season-opener.

South Carolina ranked as the #112th rush defense in the country and is missing some starters in their front seven. Even if the Gamecocks stack the box, Notre Dame should be able to run the ball on them and take some pressure off of Tyler Buchner in his first game back. I’m expecting a big game from Audric Estime and for Chris Tyree to finally break the long run we’ve been waiting for all season.

Notre Dame fans are concerned with not having Michael Mayer and Isaiah Foskey, along with some other injured starters. Still, South Carolina will be missing 22 players due to opt-outs and transfers, including 11 starters. The Gamecocks are much, much more depleted than Notre Dame. South Carolina will have some very inexperienced players in some key spots tomorrow, facing off against the Irish.

Where will the pass rush come from?

Notre Dame is playing without Isaiah Foskey, who opted out, and Jayson Ademilola, who is out with an injury. That’s a lot of Notre Dame’s pass rush that won’t be available tomorrow. How Notre Dame handles their DL rotations will be really interesting to watch. Does Rylie Mills slide inside? Does Justin Ademilola play on the strong-side end? Does Jordan Botelho provide the pass rush the Irish lose without Foskey? Does a younger player we haven’t from much emerge?

Lots of questions that we won’t have answers to until tomorrow. A line of Ademilola, Cross, Mills, and Botelho would be interesting – and potentially a glimpse toward 2023 – but it would also be undersized.

Does Notre Dame blitz more with the losses upfront? Notre Dame tried to blitz Marist Liufau a lot this season, but it rarely, if ever, proved effective, so I don’t think that’s the answer. Maybe Jaylen Sneed has his breakout performance and provides some pressure on Spencer Rattler.

We’ve heard much about Buchner’s progression during the season despite not playing from being up in the booth and helping track plays. We’ll see if that’s been talk or if there is some merit to it tomorrow. It’s no secret that Notre Dame is in the market for former Wake Forest QB Sam Hartman. The Gator Bowl is Buchner’s one chance to make an impression on the staff before the arrival of a potential transfer – whether it be Hartman or another transfer.

When we last saw Buchner, the poor dude was under siege all day, so his passing struggles should be taken with a huge grain of salt. He beat Drew Pyne for the job in camp for a reason, and the line that Buchner played behind against Marshall is not the same line that Notre Dame had by season’s end, even if the actors were the same.

Notre Dame is playing without Cam Hart tomorrow and might also be without Brandon Joseph. When we last saw the Irish take the field, they were without Hart and slot corner, Tariq Bracy. Caleb Williams proceeded to shred the Irish defense as he sealed his Heisman candidacy that night. Even with all the players South Carolina is missing, Spencer Rattler can make a depleted Irish secondary pay with some big plays.

If Joseph and Hart are both out tomorrow, the Irish will be limited in what they can do defensively since they are also missing some key players along the line as well. However, if Joseph is out, Notre Dame could run Ramon Henderson and Xavier Watts with a look toward 2023.

I don’t know how anyone confidently predicts this game, given all the players missing on both sides and the other intangibles of bowl games these days. Vegas has Notre Dame as the slight favorite, which makes sense since they are much more depleted. Half of their starters are out of this game. I think this game starts slow for both teams and gets frustrating for those watching from home, but eventually, Notre Dame’s rushing attack takes over before halftime. Buchner hits some big passes in the second half, and Notre Dame pulls away. 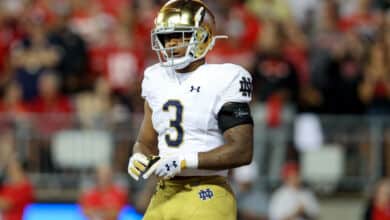