Notre Dame was in a 24 year Heisman drought, its longest since the award was established in 1935. Then Tim Brown ended the drought when he won his Heisman in 1987.

But Tim Brown may have been unique in that he might have been influenced by Notre Dame’s Bowl Appearances, which began after the ’69 season, with the ’70 Cotton Bowl. When Notre Dame broke the 45 year self-imposed boycott of the bowls, it did so in Dallas. In the ’70 ,’71. ’78 and ’79 Cotton Bowls, when the irish went a respectable 3-1, the Irish and their accompanying throng were all over Dallas and he Cotton Bowl located on its Fairgrounds. A young Tim Brown may have noticed. And when Gerry Faust’s staff came a-courtin’, Tim Brown was aware of the Fighting Irish and their fanatical followers.

Tim Brown played for Woodrow Wilson high school, which had had the distinction of having had a previous graduate win the Heisman Trophy. That was Davey O’Brien of TCU, a diminutive but great player who won the ’38 Heisman and later had an eponymous trophy named after him. For the record, the Davey O’Brien Trophy is awarded to the nation’s best quarterback. When Brown won his Heisman Trophy, Woodrow Wilson became the first and only high school that had produced two Heisman winners, though Matt Leinart, having followed John Huarte by 40 years at Santa Ana Mater Dei, would later change that.

Brown was not raised by a football family; in fact, Mom forbade him to play football. But Tim, otherwise a stand-up guy and a fine son, sneaked away from band practice to play football. Despite Brown’s speed and football prowess, Woodrow Wilson finished just 4-25-1 during his three varsity years. Dallas Carter they were not. Nebraska, OU, SMU and Iowa were the other suitors for Brown, but Gerry got his man.

Neophyte or not, from a losing program or not, Brown burst onto the scene at Notre Dame as a frosh. Well, after his first game that is. Against Purdue in the 1984 opener christening the then new Hooseier Dome, Brown lost a kickoff in the lights and fumbled the ball, enabling Purdue to strike early and beat the Irish 23-21. This bore an eerie similarity to the ’81 Sugar Bowl in which there was a communications gaff between the Irish returners and neither grabbed the ball, allowing Georgia to recover the ball on the 1-yard line. This gave Georgia, and more specifically, Herschel Walker, the shortest possible field to get one of their touchdowns. So, the Hoosier Dome was “deja vu all over again.”

But Brown lit it up as a flanker/receiver as a true frosh, grabbing 28 of Steve Beurlein’s tosses for 340 yards but he was just warming up. That was a Notre Dame freshman record at the time.

In 1985, in Faust’s sad farewell, which ended with forlorn Gerry holding onto poor Allen Pinkett on the sideline in the Miami debacle, Brown was one of the few bright spots. He scored his first three touchdowns receiving while catching 25 passes for 397 yards, a nifty 15.9 yards per catch. And ’85 was the year Brown took over the kick return duties, with 14 returns for a 24.1 average, with a touchdown.

In 1986 Louis Leo Holtz arrived from Minnesota. In a striking similarity to Parseghian and Pagna’s discovery of Huarte
in the Spring of ’64 Holtz quickly identified his gamebreaker, and in a few milliseconds decided to fully weaponize Tim Brown.
In addition to his work at pass receiver and kickoff returner, Holtz would now add punt returns and runs from scrimmage to the dazzling Brown’s portfolio.

And Brown excelled in all four areas.

Could he catch the football? 45 receptions for 910 yards, an explosive 20.2 yards per catch with 5 touchdowns

Could he run the ball? He carried 59 times for 254 YARDS and two more touchdowns.

Could he still return kickoffs? How about 25 returns for 698 yards and two touchdowns.

He also began returning punts with 2 for a whopping 75 yards. It was the last punt return of the season that eearned Brown the full time returner’s job for ’87.

The Irish had started slow under Holtz, just 1-4 in the first 5 games. In the season-ending game at the Coliseum against USC the Irish fell far behind and then staged an invigorating comeback to win the game 38-37. Brown’s 56 yard punt return put the Irish in postion for the win and it capped off a day in which Brown accumulated 254 all-purpose yards. Brown made the College Football All-America Team

Holtz began beating the drums in the offseason for Brown’s Heisman campaign. 1987 was an interesting Heisman year, as it was in the interregnum between Vinny Testaverde’s dominant Heisman campaign of ’86 and Barry Sanders’ explosive 1988 Heisman year.

After dispatching Michigan 26-7 in Ann Arbor, the Irish returned home to play Michigan State in what was then a rare night game. ESPN was not yet a teenager, and there were few games televised each weekend with even fewer at night in “prime time.” Those that were drew a large attentive audience. George Perles, defensive genius of the stunt 4-3 had the Spartans on a collision course with the Rose Bowl, which they would achieve in that same 1987 season.

As millions watched, Blake Ezor misplayed the opening kickoff and stepped back into the endzone for a 2-0 Irish lead. With an afternoon of tailgating and such, the Irish crowd exploded and the inspired Irish defense kept Perles’ offense bottled up and forced punt after punt. Brown returned one for 66 yards and a touchdown, and on the ensuing Michigan State punt, Brown returned it
again for a touchdown, this time for 71 yards. The large viewing audience witnessed this awesome performance, and many of the sets of eyes belonged to Heisman voters. Brown led the 31-8 rout of the eventual Rose Bowl Champs.

Though Holtz was now phasing in the option game with Tony Rice, Brown achieved specatcular results in every phase of the game.
He caught 39 passes for 846 yards, a mind-boggling 21.2 yards per reception. He would finish with 2493 career receiving yards.
He ran the ball in 1987 34 times for 144 yards, returned 23 kickoffs for 456 yards, and returned 34 punts for 401 yards and three touchdowns.

Holtz was so inspired watching Brown return kicks that he sent his recruiters into Northeastern Pennsylvania, to Wilkes-Barre, for some kid named Ismail, with the nice nickname of “Rocket.” Isamil would arrive in 1988

For his career Brown amassed a school record 5,024 all purpose yards. It had been quite a ride for the guy sent to band practice, rather than the football field. And in a wonderful bit of symmetry, Brown led Notre Dame back to a major bowl for the first time in seven years, appropriately enough the Cotton Bowl in hometown Dallas.

In the easiest Heisman win for Notre Dame since Leon Hart in 1949. Brown won by a huge margin over Don McPherson, the Syracuse quarterback. Media darling Gordie Lockbaum of Holy Cross
finished third.

In 1987 in addition to the Heisman, Brown was voted UPI College footbal player of the year, the Sporting News Player of the Year
and won the Walter Camp Award. Brown was drafted with the 6th pick in the NFL draft. Brown joined Bertelli, Hornung, and Huarte as Notre Dame Heisman winners who were recruited by a coach different from the the coach under whom they won the Heisman. 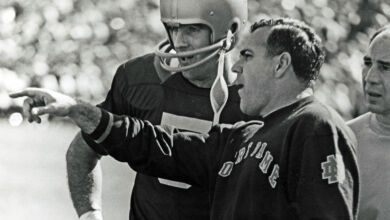