The Notre Dame-Michigan series has been historic, strange, dramatic, oft-disrupted and filled with dysfunctionality. Whatever else can be said of the rivalry, Michigan was the first team that Notre Dame ever played.

Notre Dame’s first football game EVER was on the day before Thanksgiving in 1887, Novembere 23rd.

The Michigan team had three players who were transfers from Notre Dame, and they had persuaded the Michigan powers to contact Notre Dame about a game while the Wolverines were “on the way” to Chicago for a Thanksgiving Day clash with the Chicago Harvard Club.

Brother Paul, the head of sports at ND, consented. The Michigan team came in on the morning train and “taught” the Irish players the rudiments of football in a practice session before the game.

On a field that was unplayable in the November weather Michigan won 8-0 when the game was called at halftime because of the first semi-officially recorded “quagmire.”

NOTE: On March 4, 1888, just a few months after this first contest, Lars and Martha Rockne enjoyed the birth of a baby boy who they named Knute in Split, Norway. For unto us a child is born…..

But the Irish were on the move and expanded to a five game schedule by 1893.

Fielding “Hurry-up” Yost was ruling the roost in College Football and his Michigan teams were known for scoring a point per minute. Then the Michigan squad played Notre Dame in neutral, and equally insipid, Toledo in 1902. The Irish were stout and Michigan only led 5-0 at half, finishing the game with a 23-0 margin. This was considered a moral victory for Notre Dame and an embarassment for Yost
and his squad. Yost was less than amused.

Michigan won the first 8 games on the intermittent series by a combined 121 to 16.

THE RIVALRY DIES, THE “FIGHTING IRISH” ARE BORN

Then a sportswriter for the Detroit Free Press penned the following lead for the game story:

Eleven Fighting Irishman wrecked the Yost machine this afternoon. The sons of Erin, individually and collectively representing the University of Notre Dame, not only beat the Michigan team, but dashed some of Michigan’s greatest hopes and shattered Michigan’s fairest dreams.

Well, the nickname stuck and had the right blend of accuracy and elan to serve as the symbol for college football’s greatest program.

AFTER 12 WINS, FIELD YOST CANCELED THE SERIES WHEN NOTRE DAME WON ONCE!

Yost, in a remarkable display of arrogance, canceled the return match in South Bend as he protested that the Irish were going to use two players who should have been ineligible. The memo about “tending your own sheep” had not quite reached the irascible Yost’s mind, if not his desk.

Hypotheticals are invidious, but Notre Dame may not have become the team and school we love had it entered the Big Ten. After Yost played Nicolo Machiavelli to scuttle Notre Dame’s misguided entreaties to the Big Ten (then the “Western Conference”) the Irish immediatly began scheduling teams from the East. Then, in a sheer stroke of visionary marketing genius, Rockne negotiated with Howard Jones to play the annual Notre Dame-USC game. The series began in 1926, and this established true intersectional football, cemented Notre Dame’s preeminence as a national power and validated college football on the “American Frontier” of the West Coast.

Rockne, ever shrewd and opportunistic, knew he heeded a new stadium, and he demanded one from the good fathers. He told them he wanted one that was built and contoured like Michigan Stadium, even if not as large. Otherwise, Knute suggested, he might have to return some of those intriguing phone calls he was getting. Blending modernization with tradition, Rock had the field sodded with the hallowed turf of Cartier Field when Notre Stadium opened in 1930

It is not then surprising that Yost would not play Notre Dame. The series stood 12 and 1. Yost presumed the 12 and found the one galling. Rockne’s open mockery of “the hillbilly” Yost did little to mend fences.

It was unfortunate as the teams were natural rivals. Gold, Blue and Maize. Only 200 miles apart. The Notre Dame Victory March and “the Victors,” college football’s two greatest fight songs.

There were 33 seasons before Fritz Crisler agreed to break the ice and schedule a home and home series in ’42 and ’43. Michigan won in South Bend in 1942 by a 32-20 margin over Leahy, then in his second year. Leahy would not lose again in South Bend until 1950, on that fateful day when Dale Samuels led Purdue to a win over the Irish.

In ’43, however, Leahy led a skilled team, led by the magnificent Angelo Bertelli to a 35-12 drubbing of Michigan in Ann Arbor. This incensed the Michigan community, now brainwashed by three decades of Yost’s vitriol, and there was no eagerness to play the Irish. That ’43 game was by far the worst home defeat of Fritz Crisler’s successful reign.

Thus, Notre Dame and Michigan had another 45 year hiatus. This would result in there being only two games between the two in 70 seasons between ’09 AND ’78. Michigan was still in the lead 13-2. But the “2” losses to Notre Dame irked the maize and bluebloods in Ann Arbor.

With Don Canham as Athletic Director, Michigan was interested in reopening the series. It didn’t hurt, that Glenn E. “Bo” Schembechler, the Michigan Coach, had played football for for Ara Raoul Parseghian while Bo and his fellow offensive linemen were matiriculatin’ the ball down the field for Ara’s Miami of Ohio team. For the first time in decades, mutuality of respect and honor were being restored.

Ara was retired when the the series restarted in 1978

1978 – Dan Devine was coaching the Irish, fresh off the magnificent ’77 national championship and the massacre of Bevo and Texas in the Cotton Bowl.

Devine had averred that “They’ll have to take the championship away from us on the field,” Ok, Dan, have it your way. and so it was. For after Mizzou came in and upset the Irish 3-0 in the ’78 opener, Ricky the Peach Leach led Bo’s Woverines over the Irish 28-14.

1979 – Chuck Male had a good day kicking and Bob Crable made a heroic block late to seal a tense 12-10 win for the Irish.

1980 – one of the series’ oddest games. Devine and Schembechler both coached fundamentally sound football, but this game was a comedy of errors and strange plays.

A Michigan defender, well, sort of committed mayhem against Tony Hunter and Kiel and the Irish moved downfield on one of the most protested interference calls of all time.

Harry Oliver lined up for a ”51 yard field goal, and many attendees seem to remember the wind dying down. Harry O was true and the irish prevailed 29-27. Let’s let Ufer finish the story.

The iconic Bob Ufer, as Michigan announ cer was the last airbender from an era when radio, not TV, was most important. He had the following, saddened, disoriented call at the end of the game:

’82 – in the first of what would be many night games at Notre Dame, (“Musco Lighting”) The Irish leapt to a big lead with Larry Moriarity pounding the Wolves, and hung on to win 23-17.

’86 – in Holtz’ first game as ND head coach, the Irish shook off the cobwebs of the Faust regime and lost 24-23 when John Carney could not convert a late field goal. Bo would NEVER beat Notre Dame again

’87 – the Irish romped in Ann Arbor with local kid Terry Andrysiak from Allen Park, MI leading the Irish. Ricky Watters looked like the next thing with that long stride. Notre Dame 26-Michigan 7.

‘1989 – A game all Notre Dame fans will always remember and never forget.

It was #1 versus #2 and while it is poignant, it is probably realistic that there will never again be a Michigan-Notre Dame game when they are the two top-ranked teams in the country. Bo was ready to pound the Irish with a massive OL and elephant backs Jarrod Bunch and Leroy Hoard. But the Irish defense would not allow that. Raghib “the Rocket” Ismail scored two kickoff return touchdowns on a wet carpet in Ann Arbor confounding Bo and the Michigan partisans 24-19.

Bo had never lost to the same team three years in a row, until that day. Bo retired 1-3 against Lou Holtz.

One of the losses was the ’91 game, in which Michigan shut down Bettis. A late pass from Elvis Grbac to Desmond Howard sealed the 24-14 Michigan win and turbocharged Howard’s Heisman campaign.

In a masterful performance by Kevin McDougal, Notre Dame led early and then held off the late charging Michigan to win 27-24 in that nearly magical season of 1993 when the Irish vanquished the “all-time greatest team,” Florida State and its Heisman QB Charley Ward, only to lose to Boston College.

A FAREWELL TO ARMS

With Notre Dame’s move to play 5 ACC games a year and the desire to retain the California strain of the rivalries with USC and Stanford, Notre Dame concluded the series. The final, for now, game was played in South Bend on September 6, 2014. Notre Dame 31, Michigan 0. The game was not nearly as close as the final score indicated. Riding the momentum of the original 8 game winning streak, Michigan leads 24-17-1. No further games are scheduled so there is another hiatus.

Well, many thought the Apocalypse was upon us when the Cubs started playing night games at Wrigley. And Beano Cook, in his twilight, opined that he thought that civilization, as we know it, would end when teams not from the Pac-10 or the Big Ten played in the Rose Bowl. Things change, life goes on. And so it will.

But don’t be surprised if Notre Dame deigns to play Michigan again in the future. 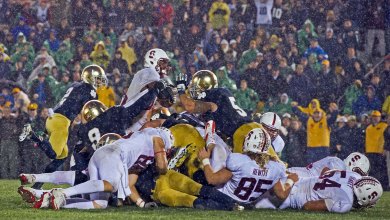 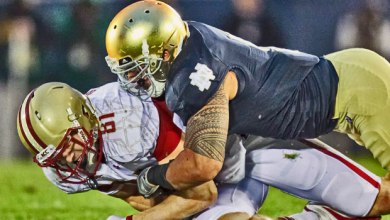 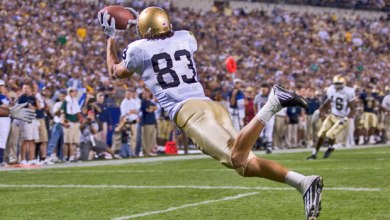 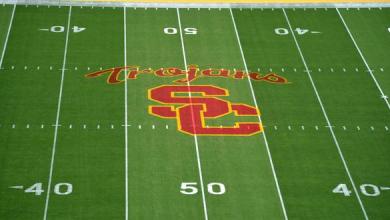