The tenor of the 2016 Notre Dame recruiting class will likely be determined by the decisions of three players–Demetris Robertson, Ben Davis and Caleb Kelly. They are a star studded trio–five stars to be exact–and because Notre Dame has 22 solid commitments heading into National Signing Day, all the attention will be given to those three announcements. And, really, there is merit to the excitement and intrigue regarding those players, as all three are immensely talented and would be great additions to the class of 2016. They would also represent the only five stars inked in this year’s recruiting cycle for newly extended head coach Brian Kelly.

Of course, there are five stars in every recruiting class, they just aren’t given the ranking distinction by the recruiting services. Does anyone want to make the case that Josh Adams, a composite four star player and rated three stars by some recruiting sites, was not a five star player for Notre Dame in his true freshman season? How about Jerry Tillery, who started multiple games on the defensive line last season, or Shaun Crawford, who by all accounts had won the nickel corner job and figured to play a major role before tearing his ACL late in fall practice? None of those guys were bestowed the honor of the five star distinction, yet played, or were going to play, major roles for Notre Dame in 2015.

Here are five players in the 2016 Notre Dame football class who if they had gone to more camps or been an inch or two taller, would be looked at much more favorably by the analysts and a top 10 class would be pushed into the top 5.

Love suffers from the same issue that Shaun Crawford did last season: his height. He is listed at 5-11, but he looks closer to 5-10 or 5-9, which is viewed as a little too small to be considered elite. He also has something else in common with Crawford when comparing the two players: Julian Love is a baller. When watching his film, it’s hard to tell what his best position at Notre Dame might be, as he was incredibly dynamic out of the slot and in the backfield on offense. On defense he played all over the field; free safety, slot corner and even right over the center as a hybrid type middle linebacker. He also returned kicks for the back to back state champions in Illinois, and there are unconfirmed reports he was also responsible for the halftime orange wedges. He was clearly the team’s alpha dog, he was the leader both vocally and by example, which is a trait that is often overlooked, but extremely important. The best player on back to back state champions carries with himself a ton of confidence and the expectation of excellence, which is the type of attitude Notre Dame needs on its football team.

Every analyst has pretty much the same thing to say about the 6-5, 215 pound receiver out of Abbotsford, British Columbia: incredible athlete but, he is raw and needs lots of work before he can really contribute. The major knock on Claypool, naturally, is the level of competition he faced on a weekly basis playing Canadian football; it’s just hard to project how he’ll do against players of equal talent week in and week out. Sure, there is merit to that argument, but 6-5, 215 with 4.4 speed is what it is, and that kind of ability is likely to translate in America just as it would anywhere else. Oh, I mentioned he can jump/fly, right? Can you seem him doing that in Notre Dame Stadium next season? His build and skill set is somewhat reminiscent of another big athlete Notre Dame missed out on some years ago, Anthony Barr. He played about 4 different positions and the thought was, great body, but where will he play? He ended up at linebacker for UCLA and now is a Pro-Bowl player for the Vikings. This isn’t to say Claypool will end up on defense, although I suspect he’d be awesome there, but the point is, players with the size and skillset of Claypool are pretty rare. It’s not hard to imagine that had Claypool played in the United States somewhere he’s easily a five star talent.

When Pride flipped his commitment from Virginia Tech to the Irish on Christmas Eve it didn’t come with much fan fare, mostly because it was Christmas Eve, traditionally a day for other things besides recruiting news, but also because at the time he was pretty much a consensus three star player. Then his senior film started coming in and analysts began to change their view of him pretty quickly. In fact on 247’s recruiting website, they shot him up all the way into their top 100 and the #7 corner in the nation (his composite ranking is #241, 23rd corner). Again, as has been the theme with the Notre Dame corners, his height hurts him as far as ranking goes. If he is 6 foot, he’s a high four star talent, even approaching five star status. But, he’s 5-10, and it’s rare to get a ton of love at that height playing corner. But, Pride is a technician, he’s very advanced in this aspect of his game for a high school player, and he’s one of the fastest players in the class. Virginia Tech, who turns out first round corners pretty much yearly, wanted him bad, which should say something about his potential and overall ability.

Speaking of alpha dogs, that’s the best way to describe Elliott, the three star safety from Chesterfield, Virginia. If there was a textbook case of how to fly under the radar, it’s the 6-1, 180 pound safety prospect. He committed to Notre Dame a month after he was offered, during their annual Irish Invasion in June of this year, didn’t camp anywhere else and then went on to play quarterback for his high school team while playing very little defense, which he is slated to play for the Fighting Irish. To sum it up, he was an early commit who didn’t camp and was playing out of position for his high school team. He had close to no chance of rising up in the recruiting rankings under those circumstances. All he did as the signal caller for his high school team was win them a state championship by essentially being an uber competitive force of nature that wouldn’t let his team lose. If Elliott is the type of player that Brian Kelly and his staff are going to zero in on early in the recruiting process, that is a pretty good indicator of what they think of him as a player.

(In case you hadn’t noticed, UHND thinks a lot of the seven defensive backs entering this class)

If there was a flier in this year’s recruiting cycle, it was taken on the 6-5, 225 pound defensive end from Walled Lake, MI. He didn’t receive a ton of big offers, but this is likely due to him a.) starting the game of football late in his life and b.) committing to Notre Dame early. Think of him as Notre Dame’s version of Ziggy Ansah, formerly of the BYU Cougars and former first round pick of the Detroit Lions. He started football late in his life and has mostly gotten by on athleticism and effort. Notre Dame wanted to get him locked up early, before other schools really got a good look at the potential Ogundeji possessed and they did just that. Notre Dame’s struggles with the pass rush are well chronicled and if defensive line coach Keith Gilmore can teach some technique and moves to this athletic frame, Notre Dame might have the steal of the 2016 class. 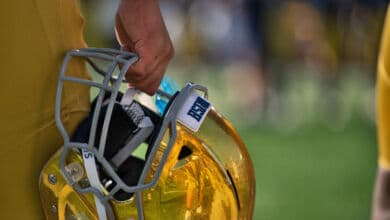 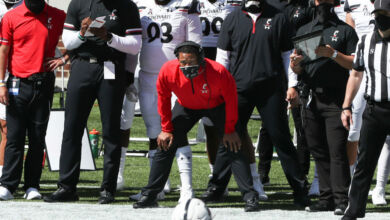