The recruiting battle between Washington and Notre Dame for linebacker/safety Asa Turner will wage on into February.  Turner, originally scheduled to sign his letter of intent on Wednesday during the early signing period, has been wrestling with the decision between the Huskies and Irish and has been unable to settle ona  final destination.  Saturday Turner released a statement saying he will be waiting until the traditional signing period in February.

I’d like to thank everyone, especially the University of Washington and Notre Dame coaching staffs, for their patience and understanding through this difficult time.

I do not want to commit/sign to a program until I am 100% comfortable with that decision, and unfortunately, I am still unsure. Therefore, I will be using the time between now and February 6th to evaluate what is best for my future and family.

Turner provided the lone bit of drama for Notre Dame on Signing Day as the Irish had their 21 commitments all locked up and in line to sign their letters of intent.  The Notre Dame staff though has been recruiting Turner since his summer commitment to Washington and have given him enough reason to reconsider the Irish that he is waiting.

Notre Dame’s decision to continue to recruit Turner has ruffled the feathers of Washington coach Chris Petersen and Husky fans.  On Signing Day, Petersen took a veiled shot at Notre Dame for recruiting Turner and bemoaned of the “vultures” of college football.  Husky fans have been trying to justify Washington’s recruitment of committed players under Petersen as different than the Notre Dame staff’s efforts with Turner ever since.

Turner made a very wise decision to wait until February as it appears he is legitimately torn between the two programs.  Since he is not an early enrollee, there really is not any difference between signing in December and February so it makes perfect sense that he wait.

Notre Dame will keep the spot open for him as they try to close out this class now with Turner and 4-star DE Isaiah Foskey who had said all along he will be waiting until February.  As of now the Irish are considered the favorite for Foskey.  Should the Irish manage to pull in both in February, Notre Dame will have itself one hell of a defensive recruiting class. 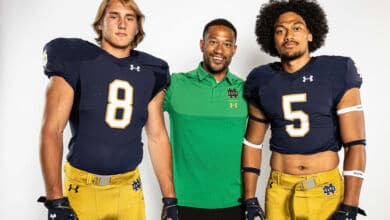