I should be clear about something right upfront. When I say this is a film review, what I mean is I watched Will Shipley’s highlight tape, and now I’m going to talk about how good he is. You know, for the fun of it.

Shipley has been the talk of the last week or so around Notre Dame parts of the internet, with his recruiting race seemingly coming to a close rather quickly. He’s easily the top player left on Notre Dame’s board at #20 overall, and given his position of running back, a vitally important one for the Irish, his ranking is almost beside the point.

Notre Dame has long been considered one of the front runners for Shipley and reportedly really liked where they stood with him before his scheduled official visit on March 20th to the 22nd. It was going to be a wild extravaganza with several high profile targets all on campus building relationships and making their decisions. Everything obviously changed, with campuses being shut down and shelter in place orders being placed all over the country. Whatever momentum Notre Dame had, was halted. That doesn’t mean Notre Dame has given up on landing Shipley in the end, even though recent public momentum has swung towards Clemson.

We usually do film reviews of top players, and since Shipley would be the highest-ranked player they’ve landed since Jaylon Smith in 2013, I figured we ought to do one for him as well.

Finally watching Will Shipley's highlights and my analysis is he's very good. pic.twitter.com/cj6FfUHnbA

Will Shipley The Prospect

For all intents and purposes, Shipley can go wherever he wants. No one is turning him down. He’s been mostly linked to the in-state schools, Clemson, and Notre Dame. There was a period late in the 2019 season that Shipley was Notre Dame’s to lose, that cooled off some, but the momentum was still with the Irish, till all officials were canceled, as stated above.

Running back coach Lance Taylor has been playing a pivotal role here. His ties to Carolina Panthers running back Christian McCaffrey, who Taylor coached in college and who Shipley has been compared to, has been a big selling point. Shipley is considered an all-purpose back by the recruiting sites, we’ll get into that in a second, but he isn’t built in the mold of all-purpose back Chris Tyree, who Notre Dame signed in the 2019 class. Shipley is near 200 pounds. He can be a workhorse if need be.

How Fast Is Will Shipley?

A player can’t really be considered a five-star prospect at running back if they don’t have some home run hitting ability, so whoever ranks these players thinks Shipley had that in him. His highlight tape also confirms that. He hasn’t run track since his sophomore season, and that was only indoors, so there isn’t any kind of time to put him to. So we are left with whatever story the tape tells, and that story is one of a player who can score from anywhere on the field.

Shipley has speed that can be defined as “no one is catching him” speed. He’s got a slew of long touchdown runs on his highlight tape where various players have the chance to run him down, and they cannot. This is one of the reasons he accounted for 42 touchdowns as a junior last season. When he gets into the open field, he scores. And when opponents think they’ve got an angle on him, he outruns them. He probably doesn’t have elite NFL speed, but he’s close to elite college football speed.

How fast is Will Shipley? Who knows, but this defensive back thought he'd cut him off getting to the edge and he got outrun, and this safety thought he had an angle on him and he got outrun. So he's fast enough to do all that. pic.twitter.com/t4EoDark0B

Shipley is most often compared to Christian McCaffrey, which is apt but also unfun, so I’m going to say he’s the college version of Marshall Faulk. Both are around the same size, extremely versatile, tough inside runners, burst to get to the edge, and fantastic out of the backfield. Shipley is right where you want to be for an every-down type runner; he’s right at 200 lbs at the moment, and a lot of that weight is in his lower body, so he’s a sturdy runner who isn’t frequently knocked off balance.

He’s patient, but he isn’t indecisive. He comes at the defense with urgency, and it looks like he shocks defenders with how quickly he gets through holes. Defenders look like they’ve got him, and then he’s gone and they are grasping at air.

This is what makes Shipley an elite prospect, in my opinion. He catches passes out of the backfield, in the slot, and on the outside, running curl routes, post routes, angle routes, go routes, crossing routes. He’s clearly comfortable catching the ball, tracking it in the air, and then running after the catch. In today’s offenses and Notre Dame’s specifically, this is the dream. An every-down back who is just as good a receiver as he is a runner. And the thought of him sharing time in the backfield with an equally threatening Chris Tyree, who we know has elite speed, is enough to make followers of recruiting and the team in the offseason dream big dreams.

Back on the Will Shipley train tonight. Here he is running a ho hum post route for 6. I'm starting to dream big dreams. pic.twitter.com/jDXx8Nsnpd

The short of it is, Notre Dame needs this to go their way. Not just because Shipley is as good as he is, but because they don’t really have a fallback plan. It would also hurt because he is so obviously perfect for what they want in the offense, and the type of player Notre Dame needs to reach the next level. They can be good without him, but this a player Kelly and co. must get in the class. Other than that, no pressure.

What Are Our Most Traumatic Notre Dame Football Losses? 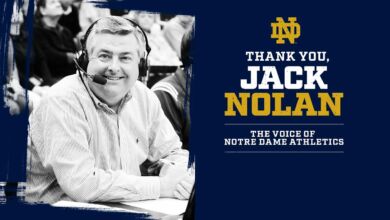