We knew Notre Dame had some moves to make regarding running back recruiting, and moves have been made indeed. Lance Taylor reached out to top 50 running back LJ Johnson, a Texas product with offers from major programs all over the country and no clear time table as to when he will be making his decision.

The latter nugget there is excellent news for Notre Dame since they are a bit late to the game with Johnson with the May offer. If his recruitment is going to extend into the fall and perhaps beyond the early signing period, the Irish have plenty of time to make up ground.

Beyond blessed to have received an offer from the University of Norte Dame!! pic.twitter.com/3ST5xLMKJl

There is some question as to whether Johnson is interested in leaving the south, but it should be noted he made an unofficial visit to Stanford before the nationwide shelter in place orders. A player that is interested in Stanford lends itself to being interested in Notre Dame. That being said, it is unknown what kind of relationship he has with the Irish coaching staff. However, he’ll likely be very familiar with offensive line commit Blake Fisher very soon.

This is the third new running back offer in the last two days, and there are possibly more coming, but given his overall ranking, it figures Notre Dame will focus heavily on Johnson and Donovan Edwards, who we talked about this week. The same principle regarding Edwards holds true for Johnson. When you get in late with top 50 players, that usually doesn’t lead to good outcomes. But, Johnson is pretty wide open, and there isn’t a crystal ball pick to his name, so perhaps this can be the exception to the rule.

The last two high profile running backs Notre Dame has been involved with–Chris Tyree and Will Shipley–were of the all-purpose back variety. Which is good, but versatility was their game. LJ Johnson isn’t that type of back. He’s a Lou Holtz style back, who plays in the I-formation in high school, and is someone you can see carrying the ball 20 times a game in college. He’s 204 lbs now, but it’s pretty obvious he’ll get up to 220 when he’s had some time in a college weight program.

His listed 40 time is 4.42, and it was run at an Opening event, so there is reason to believe this was in some form an electronic time, and thus pretty legit. He runs similar to Chase Claypool in that he is a smooth runner with an excellent initial burst, but lacks that extra, extra gear, the last bit of acceleration. Even with that, he hits plenty of home runs and doesn’t lack for speed in any way.

Since he runs out of the I-formation, he is very comfortable running inside, and he runs with the low lad level you look for in a running back. He invites contact, but doesn’t seem to have to brace for it, he just adjusts his body and absorbs the contact.

He also has a little bit of wiggle to him, not Theo Riddick type wiggle, but there is a little something there. He isn’t a stiff runner is what I’m trying to say. He can make people miss in the open field. There isn’t much in the way of him catching the ball, though his highlight tape has some of that, but the main course with him is his running ability. He doesn’t strike me as someone Tommy Rees would be putting into the slot.

His junior season, he ran the ball 206 times for 1,951 yards and 37 touchdowns, which we will mark down as very good stats. He caught just six passes for 115 yards.

Is There A Chance?

At the moment, I’d mark this down as a not really. There just isn’t much of a relationship there, and the key to someone who is from the south and is mainly looking at southern schools is to get them on campus, which he cannot do. Virtual tours aren’t going to do it on this one. Again, it looks like if Notre Dame sells him on waiting till things become clear and he gets to the campus, then there might be something to talk about. He does appear to have an open mind regarding recruiting, and he isn’t going to be rushed into making a decision, again, advantageous for Notre Dame.

I’ll say this. It’s good that they made this offer, as long a shot as it may be. They need to start taking these shots as often as possible, and if Lance Taylor is the recruiter that they hired him to be, he should be able to sell a player like this, who doesn’t have a preconceived notion or list of favorites at the moment. Who cares if it probably doesn’t happen, it definitely won’t if they don’t give it a chance. And who knows, maybe Notre Dame is due for a break at running back, right? 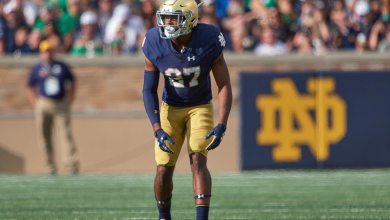