While college football creeps closer and closer to starting up again, recruiting continues to roar unabated. The coaches are still not allowed to visit the homes of players they wish to land, and recruits are not allowed to make official or unofficial trips to visit coaches. That, of course, doesn’t mean players can’t take trips themselves to check out the campus though, something offensive line recruit Tristan Bounds did this week. And the new offers continue to be handed out.

The Notre Dame staff recently offered three-star safety prospect, Kaleb Edwards, out of Dacula High School in Georgia, part of a slew of offers that have gone out this month. If you’ve followed my writing at all recently, you’ll know my ears perk up whenever a safety gets added to the board, and this was no exception. I was pleasantly greeted with a dynamic highlight package from the Georgia native that included big plays on offense and defense, from a multitude of positions, with various skills put on display.

The variety of ways Edwards impacts the game and his three-star status got me thinking of another player with similar skills four years ago: defensive back and All-American Julian Love.

Some parallels to Love here. First, both were mid-three-star players. Love finished the 2016 cycle at #480 overall and a .8711 composite rating, very similar to Edwards. Second, neither has what anyone would consider a robust offer list. Love boasted offers from Boston College, Northwestern, and Indiana. Notre Dame was easily his biggest offer. The same is true for Edwards. He’s been offered by similar type schools, and the Irish are without question the most high profile name, now that Stanford has fallen off quite a bit.

You’ll notice the hefty amount of academic schools as well, and it’s notable Stanford has already extended an offer. Edwards is an excellent student who boasts a 3.7 GPA, so he is a fit on that front as well. He was quote recently as saying he never dreamed of ever holding a Notre Dame offer. So, the combination of the Irish being the highest-profile to offer him, his academic abilities, and his regard for the university bode well here.

In much the same way I was surprised by how good Kyle Hamilton‘s film was, given his three-star status at the time he committed, I was taken aback by how impressed Edwards was. Very early in his highlight tape, Edwards makes a play from the safety position where he’s playing the slot, that man goes in motion, and Edwards moves to the deep middle as the offensive formation moves to trips left. The opposition tries to throw a deep post to the single receiver side. Edwards, despite having a receiver to the trips side run up the seam and threaten the middle of the field, is able to break on the ball, get to the pass and make a leaping interception while hanging onto the ball even as the receiver hits him. It’s a pretty high level play for any safety at any level.

I'll have something on newly offered safety Kaleb Edwards probably tomorrow. Looking over his highlights, this is such a good play. pic.twitter.com/kigirzbiHh

His ball skills stand out on that play, and he shows he has a nose for the ball, also similar to Julian Love. He finds himself in the right place at the right time on three occasions in his tape, which is very much a skill and a tremendous trait for a defensive back.

He also has experience playing out of the slot (again, hello Julian Love) and is shown breaking up passes and showing good coverage skills.

This is an area where he shows excellent instincts in the run game. He has a good feel for where the hole is going to open up, and his technique as a tackler is superb. He picks the midsection as a target, keeps his head up, and drives at the ball carrier, which seems like a small thing, but if he shows up to college with good tackling fundamentals, it will go a long way.

I found two clips where he first fills on an inside run after coming down in the box and blows up the run for no gain. On the next play, he fills hard on an outside run, taking away the sweep, then settles his feet as the runner plants to cut inside, and is able to stuff the runner for a one-yard loss. It would have been very easy for Edwards to fly upfield and allow the runner to cut inside him.

Two excellent plays against the run here. Both times he reads where the hole is going to be and fills to make the stop for no gain. On the second play he takes away the outside and inside run. pic.twitter.com/LZn8aAoCw3

This is really where the Julian Love comparisons come up because if you remember, Love was an excellent offensive football player out of the slot and in the backfield. The same is true of Edwards, and it’s in this area that makes me wonder how he could be considered a three-star player. He’s making plays all over the field at various positions. They put him at receiver, in the slot, in the backfield, and at quarterback. He doesn’t appear to be very fast, again similar to Love, but he isn’t getting caught from behind either, and he has several long touchdown plays on his tape. I don’t see him playing offense in college, but this type of athlete doesn’t seem to be a three-star talent.

Kaleb Edwards plays offense too! Here he is catching the ball in the slot for a score, running out of wildcat for a score, receiving an option pitch for a score, and throwing a perfect 50 yard bomb. And one thing you don't see in the whole video is him getting caught from behind. pic.twitter.com/UAff2eIt8F

In general, I hope Notre Dame gets every player they offer, but I really want them to get Edwards. He’s a playmaker who is good at so many things, which is indicative of the caliber of player he is overall, at least in my opinion. I’d like to think that with his praise of Notre Dame, and the stature of their offer compared to his other offers, Notre Dame has a good chance. But, time will tell. 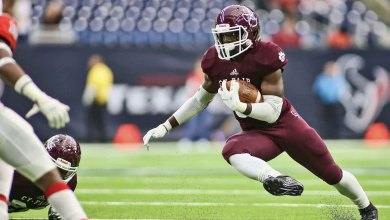