There wasn’t a whole of drama for Notre Dame heading into National Signing Day today.  Just one recruit, Louisiana running back Logan Diggs, remained on the board for the Irish and despite a late push from LSU, all signs pointed to Notre Dame heading into today.  Earlier this afternoon, Diggs made it official by signing his letter of intent and officially becoming the last member of the class of 2021 for Notre Dame.

Diggs committed to Notre Dame in the summer, but the combination of a late offer from his dream school (LSU), a late offer to another running back by Notre Dame (Audric Estime), and the loss of Louisiana territory recruiter (Terry Joseph) all led to Diggs pushing out his signing from December until today.

LSU tried to flip Diggs right up until the end, but the Irish held on. Diggs mentioned earlier today that Notre Dame head coach Brian Kelly played a vital role in him sticking with the Irish noting he was in daily contact with Kelly.  That news is sure to upset the “Brain Kelly doesn’t recruit” vocal minority of Notre Dame fans.

As a senior this past fall, Diggs was named the Louisiana 5A Outstanding Offensive Player of the year after totaling 1,077 yards from scrimmage.

With Diggs finally secured, Notre Dame shored up an already loaded backfield.  After signing just one back in each of the last two classes, landing the combo of Diggs and Estime is big for the Irish – especially if junior to be Kyren Williams has another monster season in 2021 that prompts an early NFL decision at the end of the season.

While Estime is the big, power back Notre Daem has been missing, Diggs is built more in the mold of Williams.  He’s smaller and much more compact than his classmate.  He’s not Chris Tyree fast, but he’s not slow.  He’s a very good receiver out of the backfield.  And he’s already skilled in pass protection.  All in all, Diggs is a very well rounded, all-around kind of back.

In the event that Williams were to leave for the NFL following this season (not saying there are indications of that, but rather just planning for the possibility), Diggs is a great complement to Estime’s thunder and Tyree’s lightning.

This was a significant win for the Irish.  After offering in December, LSU made Diggs a major target over the last two months.  LSU running backs coach Kevin Faulk, a legend in the state of Louisiana, led the charge in trying to flip Diggs.  Kudos to the Irish staff for being able to hold on a recruit who never even officially visited a school hundreds of miles away while his homestate program came calling.

After Notre Dame put all of their eggs in the Will Shipley basket at the beginning of 2020 only to come up empty, the Irish had to completely remake their recruiting board at running back.  While they tried for months to pry Donovan Edwards out of Michigan, they never made much headway there.  All things considered, coming out of this class with Diggs and Estime is far better than it could have turned out for the Irish. 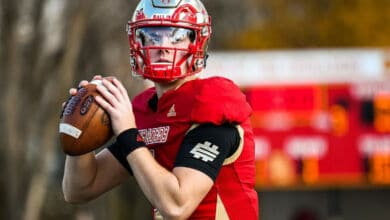