The Fighting Irish have a tremendous opportunity with Drayk Bowen from Merrillville, Indiana. He is currently listed as a 5-star linebacker and is also an elite baseball player. Bowen has the potential to be the first 5-star commit out of Indiana for the Irish since Jaylon Smith. Drayk Bowen will be headed into his junior year of high school this fall and will undoubtedly be a top priority for the 2023 Irish Recruiting Class.

The high school star has talent on the gridiron and baseball diamond. Notre Dame has seen numerous dual-sport athletes such as Golden Tate, Cole Kmet, Jeff Samardzija, and Pat Connaughton, to name a few. Not only is Drayk Bowen a 5-star linebacker, but he also plays baseball for the Indiana Bulls, one of the top travel baseball organizations in the Midwest.

Bowen is a hard worker on and off the baseball field. For those who follow him on social media, he usually is hitting baseballs, working on football drills, or in the weight room. For now, it appears he is continuing to strive for both sports.

Drayk Bowen has countless visits lined up in June. The five-star linebacker has visits to Notre Dame, Michigan, Tennessee, Ole Miss, Clemson, Alabama, Auburn, and LSU scheduled this month. Bowen has been taking advantage of the summer baseball schedule and visiting many of the southern schools while playing travel baseball around those campuses.

At the beginning of this month, the high school star was offered by the Clemson Tigers, and expect the offers to continue to roll in from around the country.

Notre Dame was Bowen’s first official visit on June 1st. The recruiting dead period ended at the start of June, and Drayk Bowen did not waste any time visiting South Bend. It is early in the process, but it appears the Irish may be the early favorites for this in-state prospect.

The academics, elite baseball and football programs, and location give Notre Dame a recruiting advantage.

Homegrown recruit for the Fighting Irish. The last five-star linebacker from the Hoosier State was Jaylon Smith, and that turned out exceedingly well. Current Los Angeles Charger, Drue Tranquill, is also another linebacker from Indiana to have a great career in South Bend and hopefully in the NFL.

Notre Dame is home to three of the last nine Butkus Award Winners, the honor given to the best linebacker in the nation; you can expect that statistics has been mentioned a time or two during Bowen’s recruitment.

Defensive Coordinator Marcus Freeman is the leading recruiter. Since Coach Freeman took over as coordinator in South Bend, the Fighting Irish have bolstered their recruiting efforts across the country. Not only has Freeman landed several commitments, but the defensive coordinator is also in the mix for some of the nation’s top defensive players for both the 2022 and 2023 recruiting classes.

Coach Freeman has a remarkable ability to recruit and develop the talent available. He was able to turn Cincinnati into one of the best defenses in the country, and fans should be excited to see what he can do in South Bend.

Notre Dame recruiting has been on fire lately. Just last week, Brian Kelly was able to land transfer Cain Madden from Marshall, a second-team AP All-American. The Irish also landed Donovan Hinish, brother of current interior lineman Kurt Hinish. With the recruiting dead period over, there have been countless players on campus for visits and Irish Invasion (summer camp).

On social media last week, dozens of players posted offers from Notre Dame Football. Last year, the Irish finished with a top-10 class, and they look to finish even stronger this time around.

Drayk Bowen is one of the top prospects for the 2023 recruiting class. The linebacker is, without a doubt, a crucial prospect for the Irish. Certainly, the sooner Notre Dame could potentially land a commitment from the prized recruit, the better.

Coach Brian Kelly landed in-state recruit Blake Fisher early in the recruiting process, and the talented offensive lineman was able to be a local voice and presence for the 2021 class. It would be fantastic for the Irish if Bowen could be the local recruit and face of his recruiting class as well. 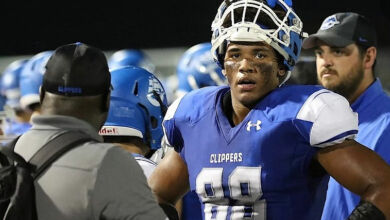