As the calendar turned to August, Notre Dame had just one wide receiver in the class of 2022, but heading into the week, we knew that the Irish were poised to potentially add two receivers to the fold this week. Merriweather is the first domino to fall with the second potentially coming on Sunday when CJ Williams announces his commitment on CBS Sports HQ.

Merriweather visited both Notre Dame and Stanford in June. Despite there being reports that he was potentially on commit watch on his official to Notre Dame, this one dragged out a little longer than most expected. It was worth the wait for Notre Dame though because the Fighting Irish offense just got a big-time talent.

247Sports ranks Merriweather as the #125 overall prospect in the country in their composite rankings and the Washington native is a consensus 4-star recruit across all of the major services.

This was a much-needed win for Notre Dame. While it was expected, the margin for error at wide receiver became razor-thin in June with Notre Dame banking heavily on Merriweather and Williams. They’ve landed one of the two now and are the odds on favorites for Williams on Sunday.

Notre Dame needed a little jolt of energy on the offensive side of the ball in general with the defense and Marcus Freeman grabbing most of the headlines over the summer. August and September could be the time for the Irish offensive staff to shine if things continue to fall for the Irish the way things have been trending.

The gaps in the depth chart at wide receiver have been pretty well documented for Notre Dame with Jordan Johnson and Jay Brunnelle both transferring this off-season and no wide receivers at all left in the junior class. Notre Dame did land three 4-star receivers in 2021, but the pressure was on Alexander heading into the summer. Adding Merriweather is a good first step in alleviating some of that pressure.

If Notre Dame adds a commitment from CJ Williams on Sunday, the pressure comes off of Alexander even more.

Amorion Walker isn’t the most highly rated prospect in the class at the moment, but Alexander’s evaluation of Walker led the Irish to being one of his first offers and securing his commitment. Subsequent offers from Alabama, LSU, and Michigan along with an invite from the Under Armour All-American game validated Alexander’s initial evaluation and early offer.

If Notre Dame just lands Walker, Williams, and Merriweather; it would be a great class. It appears as though the Irish might look to add a fourth, however, even though Alexander prefers a max of three per class given the numbers on the roster now. 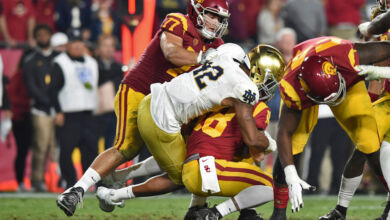 Report: Notre Dame – USC Series Not in Jeopardy with USC Move to B1G 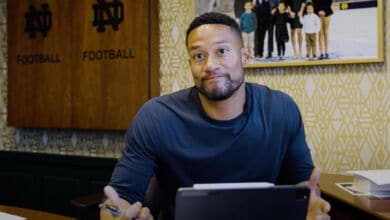