I made the 5 hour trip from Philadelphia to Pittsburgh this past weekend to witness the beginning of the Charlie Weis Era. I headed out Thursday night to stay with a friend from college before the two of us headed to Pittsburgh on Friday evening. I took pictures of most of the trip and detail the trip as it happened.

Friday — 7:00 PM
We arrived in the ‘Burgh on Friday evening around 7:00 PM. We left from the small South Western, PA town of Connellsville – home of legendary Notre Dame quarterback Johny Lujack. We made a few stops to get a memory card for my digital camera. A quick stop on Mount Washington in Pittsburgh allowed us to take some pictures. As you can see in the picture to the left, I was a little pumped up already Friday night.

Within 5 minutes of getting out of the car, we ran into 4 Notre Dame fans who also stopped to take pictures. Seeing a group of Irish fans was a sign of things to come as Heinz Field was filled with Irish fans on Saturday night.

Saturday — 2:30 AM
If you check out the site on Saturday morning you saw the pre game article that I had written after being in Pittsburgh for a few hours and after enjoying a few fine quality Augustiner’s — a fine quality cheap brew. Shortly after posting the article on the homepage, I hit the sack for a solid two and a half hours of sleep.

Saturday — 5:00 AM
After those two and half fine hours of sleep I woke up tired, thirsty, and ready for some football. I got up and got dressed in my gameday gear — green #3 jersey (with Pitt’s colors being blue and gold, I wanted to stand out as an Irish fan). After getting dressed, I sprayed my hair and goatee Kelly green to match my jersey.

After about a half hour, my friends and I were on our way to Heinz Field for the taping of College Game Day. We took a city bus downtown and then walked the rest of the way. A delicious lemonade Gatorade and 7-Eleven sandwich gave me some desperately needed hydration and nourishment for the long day ahead.

Saturday — 6:30 AM
We finally arrived at the Game Day set where we encountered a massive crowd of roughly 10 Pitt fans waiting for the show. Good thing we woke up at the ungodly hour of 5:00 AM, but at least we were guaranteed a spot up close for the show. As we approached it didn’t take long to hear my first “Go back to South Bend .” The first group of Pitt fans was very tame however as that was the only taunting I received at Game Day — disappointing Pitt fans, very disappointing.

Saturday — 9:30 AM
After three hours of waiting, the grounds crew let the crowd into the “bull pen” area right by the stage. My friends and I secured a spot in the front row along the barrier separating the crowd from the set. In the rush I ended up being around no other Notre Dame fans and was subject to the piercing sound of numerous “Let’s Go Pitt”, “Rudy Sucks”, and “Charlie’s Fat” chants.

My favorite chant from Pitt fans however was “Ur-ban Mey-er.” I guess they forgot they got their butts handed to them by Meyer’s Utes in the Fiesta Bowl. Pitt fans also chanted “Thank you Stanford” since that is where Walt Harris ended up. I responded with a little “Thank you Dolphins” chant of my own — the Pitt fans didn’t find it as humorous as I did.

A cameraman came up right to me with his video camera and said he was going to be taping something for Sports Center and to go nuts. Naturally we all went nuts and during the morning Sports Center my mug was on the screen as they announced that they would be going live to Pittsburgh for Game Day.

Saturday — 10:30 AM
Finally, after 4 hours of waiting, Game Day was about to start and what as the first image they showed live from Pittsburgh ? A close up of yours truly screaming with green hair in the first row. 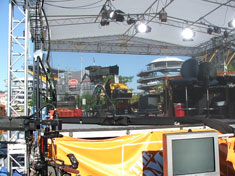 Game Day was pretty cool. There was a good segment on Notre Dame and Charlie Weis. It was a downer that I had to look at Desmond Howard and Nick Lachay instead of Rocket Ismail who was on the crew last year. Why the hell is Lachay on College Game Day anyway? What football fan wants to look at and listen to him as they prepare for the day’s game? I mean, maybe if he brought his hot wife Jessica Simpson with him things would be different, but with the lovely Jessica there is no place for him on college football Saturdays.

Throughout the show there were a lot of chants that went back and forth between the Pitt fans and the Irish faithful at the show. There were also a lot of pretty good signs at the game. Some of the good ones were Pro-Irish and some were Anti-Irish, but if you have a good sense of humor you can appreciate the creativity in some of them. Notably, there was a sign that read “Charlie Weis once ate 64 burgers on one cross country flight.” Why the Pitt fans seemed to care so much about Weis’ weight I don’t know but I can appreciate the creativity in spoofing the old Wage Boggs legend of drinking 64 beers on one cross country flight. 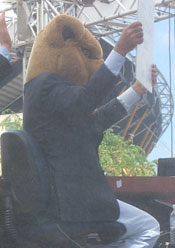 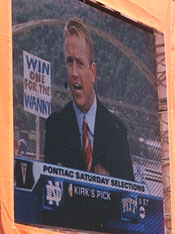 Saturday — 12:00 PM
Prediction time — Herbstreit was up first and picked the Irish. This came a while after he defended the Irish when Corso and the moronic Mark May said the Irish could start the season 0-6. Kirk said that Notre Dame would be at least 4-2 and backed that up by picking the Irish.

Corso was up next, and as expected he pulled out a Pitt Panther head and put it on. He looked like a fool with that on his head and he looked like an even bigger fool when the Irish STOMPED Pitt. Note to Lee Corso — please keep picking against Notre Dame this year, you’re good luck for the Irish.

Saturday — 3:15 PM
Tailgate time. The friends I went with were Pitt students and failed to tell me until Saturday that the lot we would be tailgating in was a Pitt Student lot. So there I was, the lone Notre Dame fan most of the time, amongst a couple hundred drunk Pitt students who thought they had a team. 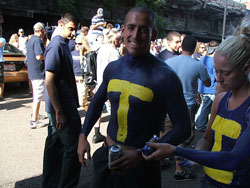 Props to my friends who went all out and spelled out “P I T T” in paint on their chest’s. They were pumped up and showed some spirit.

Our tailgate was very much a college tailgater. Our grill was tiny and our “cooler” was in my friends words “kind of like a Rubbermaid type thing.” Well, the cooler was in fact a Rubbermaid container. It held our Rolling Rock, Augustiner, and IC Light like a champ however. Never drank IC Light before, but again I’ll say it was a fine quality cheap brew. 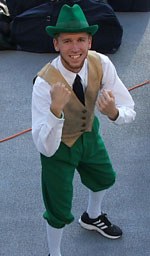 Satu
rday — 5:45 PM
After just two hours of tailgating, we headed in since the gates had already been open. Our lot was good 15-20 minute walk and on the way I encounter much friendlier crowds after walking through the Pitt student lots to a number of “A-Hole” chants. Being from Philly I expected much worse since we don’t tend to treat opposing fans too well.

Along the way I walked past a lot of Notre Dame fans and yelled “Go Irish” to each one. There were numerous Notre Dame fans still tailgating and making their way into the stadium.

After getting into the stadium and using the facilities I walked around and found a place to take some pictures. I was about 15 yards for Charlie Weis at one point, but he wouldn’t look into the stands — the man was locked in. 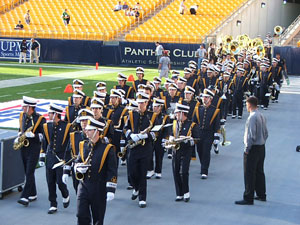 I did talk with the Leprechaun for a bit. I asked him if he was ready for some push ups and he said he was good for 100. Well, he was wrong; he had to do 147 pushups throughout the night.

I also got to see the band walk out. I asked them to play the fight song just once for me, but they were a little busy. One of the band members told me not to worry though, they would be playing it a lot and boy was that guy right.

After a few more pictures we made our way to our seats in the Upper End zone — section 518 to be exact. 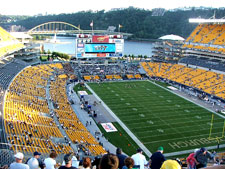 Saturday — 7:00 PM
The food at the tailgate was wearing off and we needed a little more nourishment for the game so off we went to the nearest concession stand. Nachos, a pretzel, large soda and $13.25 later, we had out snacks and went back to our seats and wait the last hour for the game to start.

While we waited our section filled up with lots of Notre Dame fans. That upper end zone must have had about 90% Notre Dame fans to 10% Pitt fans. The Irish faithful took over the section and the “Let’s Go Irish” chants began.

Saturday — 8:00 PM
Kickoff. The long off season was over. The game was under way. The Charlie Weis Era was upon us. To my dismay, the Panthers marched down the field and scored on their first drive. The few Pitt fans in the section finally made some noise and started to get cocky.

One fan in particular decided it was time to start taunting the Irish fans — not a good idea. Not only did they all fire back when Notre Dame scored, but he ended up getting the boot for profanity. That guy’s night had to suck, but we all let him have it with a “Goodbye” chant.

We all know how the game went. It was truly an awesome beginning to the Weis Era for Notre Dame. The Pitt fans left early and the Notre Dame fans took the Stadium over.

Saturday 11:45 PM
On the walk out, which I think was around 11:45, but I’m not sure since it was a long day, we walked through an intersection and saw a really nice Bentley. In that Bentley was Jerome Bettis with his buddy Hines Ward. Wonder if Jerome liked the show?

’02 and ’05 Openers Similar in Style, Not Substance