“Tell me how many guys have run the spread and made it past college to the next level.” –Ryan Mallet, former UM QB, Detroit News, 1/10/2008

Take these words to heart all you high school QBs, especially those with visions of winged helmets in their future. And while you’re doing that, go ahead and ponder this list of spread-offense QBs:

And that’s just off the top of my head! Sit back, relax, and watch the spread offense continue to put its indelible mark on the NFL in the coming years. As we speak, Urban Meyer’s original golden boy, Alex Smith, has just led his San Francisco 49ers to a stellar 5-11 record.

Well, technically, former Bowling Green QB Josh Harris is Meyer’s original golden boy. In the span of two years Harris went from being a 2004 6th-round draft pick to being a substitute teacher in Westerville, Ohio.

So the lesson here is, play for Rich Rodriguez and you can get a job as a part-time teacher making ashtrays in shop class. I guess that’s something.

And message to Ann Arbor: “The Cradle of Quarterbacks” is dead and buried. 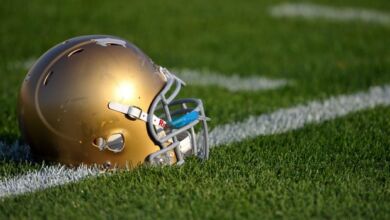 Notre Dame, Our Mother: The Most Legendary ND Coach You’ve Never Heard Of

Irish Stewed: Catholics, Convicts, and the Return of the Spectacle