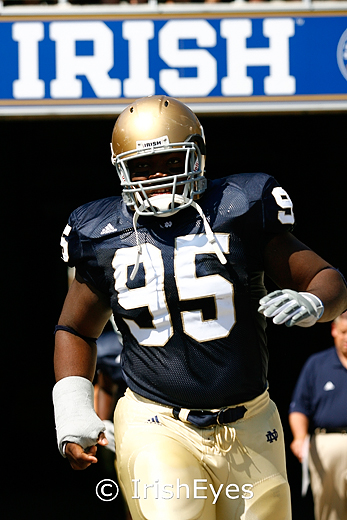 True freshman nose tackle Ian Williams was named to the All Freshman Team by the Football Writer’s Association of America.

Williams finished his first season with 45 tackles, including 19 solo stops and 1.5 tackles for loss. He played in all 12 contests and started the final two games of the season for the Irish. Despite playing primarily as a reserve for much of the year, Williams ranked sixth on the team in tackles and was the only player ranked in the top-12 in tackles on the team who did not start at least four games.

Williams was named to the CollegeFootballNews.com all-freshman third team and was an honorable mention member of The Sporting News all-freshman team.

Williams was very effective at one of the toughest positions for a true freshman to play in the 3-4 defense this year and is expected to take over as the starter in 2008 if Pat Kuntz moves over to the end to take over the start spot vacated by the graduation fo Trevor Laws.

The emergence of Laws down the stretch this season as at least taken away some of the sting of the decommitment of Omar Hunter earlier this month.   While he was not dominan, he held his own against double teams which in itself is impressive for a true freshman.  Throw in the fact that Ian registered 45 tackles (more than starting OLB John Ryan) and his performance in 2007 is even more impressive.

On a side note, am I the only one who thinks it’s BS for redshirt-freshmen to be included on all of these All-Freshman teams?  There is a big difference between a true frosh and a kid who has spent an entire year in the weight room at a major division 1 school.

How many guys have run the spread and made it past college to the next level?