Jim Morse was a three year starter for the Irish as a halfback between 1954 and 1956 and has since become a major benefactor for the University. Various buildings around campus have been named after Morse because of his contributions including the Morse Recruiting Lounge in the Guglielmino Athletic Complex. “About every other building you walk around this campus is named Morse. It’s no coincidence,” Weis said on Wednesday. “ But I could not pick a better guy to represent the ’50s for all he’s done for this university both on the field and off the field.”

Representing the 1960’s will be former starting quarterback Terry Hanrattay. Like Morse, Hanrattay started three seasons for Notre Dame and led the Irish to a national championship in 1966 under Ara Parseghian. He finished in the top 10 of the Heisman voting all three seasons he started for Notre Dame and went on to have an eight year NFL career with the Pittsburgh Steelers and Tampa Bay Buccaneers. “When he ended his career at Notre Dame at the time, he was the all-time leading passer, we all know about his NFL career,” said Weis when announcing Hanrattay as the selection for the 1960’s.

Weis dipped into his personal contacts for the 70’s and tabbed his former freshman year suite-mate, Terry Eurick. “The biggest detriment to Terry, one of my suite-mates from freshman year in college, so I’m opening myself to some serious scrutiny,” said Weis. “But he was here from ’74 to ’77 and my senior year, he’s the offensive captain of the ’77 National Championship team.” Eurick graced the cover of Sports Illustrated after Notre Dame’s 1978 Cotton Bowl victory over Texas after scoring two touchdowns in Notre Dame Dame’s 38-10 upset of the Longhorns. “Everyone knows about the Montanas and all those guys but he (Eurick) was the offensive captain of that team,” Weis added.

Notre Dame’s former all time leading rusher and current Westwood One Notre Dame color commentator Allen Pinkett will be representing the 1980’s. When Pinkett left Notre Dame after the 1985 season, he amassed a then record 4,131 rushing yards after three years as the starting running back for the Irish. Since then, Autry Denson has broken Pinkett’s mark, but he still holds the record for rushing touchdowns in a single season along with Vegas Ferguson with 17 in 1984. “Allen Pinkett, starting running back from ’83 to ’85 and when he ended his career he was the all-time leading rusher, currently everyone now knows his as one of the voices of Notre Dame football on radio,” said Weis of Pinkett.

The recently retired Bryant Young represents the 90’s. Young just concluded his Hall of Fame career with the San Francisco 49ers this past year after playing 14 seasons for them. He was a captain on the 1993 Notre Dame team that nearly won the National Championship. The 49ers selected Young 7th overall in the 1994 draft and he spent his entire career with them – a rarity in this day and age in the NFL. “I was happy to be able to get Bryant Young to return to us after retiring from his illustrious career with the San Francisco 49ers,” Weis added of Young.

For the current decade, Weis attempted to get Justin Tuck to come back, but the standout defensive end who is fresh off a Super Bowl win with the Giants, is in the process of getting married and was unable to attend.

So, Weis went out and asked another standout from this year’s NFL Playoffs in Ryan Grant to represent the 00’s. Grant started for most of three seasons for the Irish from 2002-2004 and enjoyed a breakout season in 2007 with the Green Bay Packers that included a game for the ages in the Divisional Playoff round against the Seahawks. “He’s a perfect example of somebody who can rise from relative obscurity,” Weis said of Grant. “Through hard work and effort all of a sudden his time came and this year and he became a household name when last year, very few people even knew who the guy was.”

Of the six coaches, all but Young are from the offensive side of the ball and four of them – Morse, Eurick, Pinkett, and Grant – were running backs for the Irish.

Clausen Bulks up For Sophomore Season 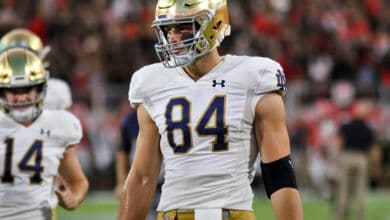 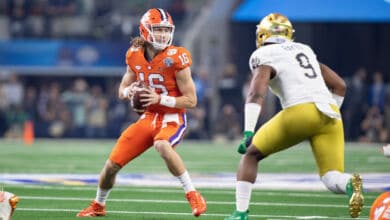 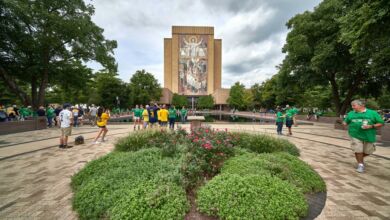 Behind Enemy Lines: A Clemson Insider’s Perspective on the Notre Dame Experience