There’s been a lot of speculation this off-season about Urban Meyer and his supposed interest in the head coaching position at Notre Dame. Popular speculation has been that some day Meyer would still like to coach at Notre Dame eventually. Numerous Florida newspapers and blogs have rehashed the topic ad nauseum ever since the temperature on Charlie Weis’s seat reached it heights after the USC loss last November. 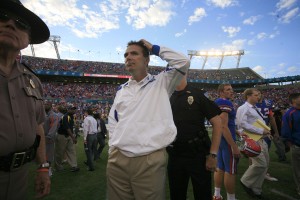 On Monday, however, the Gainesville Sun ran a report quoting Meyer as saying he would never coach at Notre Dame.   Here’s the relevant text from the article.

Midway through the talk, Meyer was talking about the “nonsense” that came up again last week when a column by Paul Finebaum in the Mobile paper indicated (again) that Meyer is leaving Florida for Notre Dame after this season.

He turned to me and asked. “Is it OK to make this announcement here?”

I knew what he was going to say because he said something similar when the speculative story surfaced three weeks ago.

Meyer turned back to the golfers and said, “I’m not going to Notre Dame. Ever. I’m going to be the coach at Florida for a long time, as long as they want me.”

My response to this is – GOOD.  I might be in the minority here, but I for one don’t want to see Meyer roaming the sidelines of Notre Dame Stadium.  The way I see it, Meyer had his chance to coach at Notre Dame in 2005.  If Notre Dame really was his dream job, he would have taken the job back then.  I’m also getting a little tired of the speculation since as of right now Meyer is the coach at Florida and Charlie Weis is the coach at Notre Dame.  As long as both of things remain true, then there is really no point in speculating.

I realize that Meyer is a great coach.  I’m not denying that in the least.  I’d be an idiot to try and make a case that he isn’t since he is easily one of the best head coaches in all of college football today.  There is still something about the video of Kevin White and Father Jenkins arriving in Utah in the presidential style motorcade and returning empty handed with Meyer accepting the head coaching job at Florida a few days later that I can’t get over.   Throw in the number Meyer has done against Notre Dame on the recruiting trail over the past few seasons and it’s all just a little too much for me to deal with.

Call me naive, but I also still believe that there’s a very good chance that Charlie Weis will remain the head coach at Notre Dame after this season and beyond which would make all of this a moot point to begin with.  With the talent Weis has assembled on the field through recruiting and on the sidelines in terms of staff changes, I believe that things are indeed on the way up for Notre Dame and Weis this year.

Hopefully this latest article will cut down on the message board posts and blog comments on all the ND sites from fans pinning for Meyer for a while.  Then again, a 10+ win season from Weis and the Irish should take care of that as well.

Kendall in the Middle - LB Makes it 12 for Irish