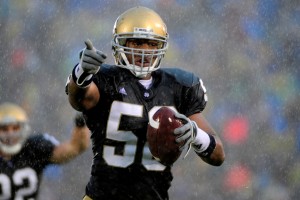 In reading some Michigan forums today, I stumbled across a thread about this year’s Michigan-Notre Dame game which featured numerous comments about last year’s contest.  The general consensus among Michigan fans seemed to be that Michigan handed the game away and that it was a lot closer than the score indicated.  At first I tended to agree with this considering all of the bone headed plays Michigan made.  Then I started to think about the rain that began pouring down right before half-time, and asked myself, what if the rain hadn’t come into play?

Remember the aerial attack that Jimmy Clausen and Golden Tate were putting on display while the skies were still bright and sunny?  I do.  Clausen and Tate were working the deep ball about as well as we saw all year before half time – until the Hawaii Bowl anyway.  The Notre Dame offense was humming along and then the down pour came.  With the rain and a nice lead, the Irish offense went into conservative mode though and

While Michigan handed the ball over plenty of times, the Irish offense could have easily put plenty of more points on the board in the second half to make the score a bit more lopsided as well.

All of this is of course mindless speculation at this point, but with not a whole lot going on until the team reports for camp its fun to think about.  So what say you UHND readers?  Would the score have been much different without the rain?  Would the lack of rain actually have benefited Michigan more?

Interestingly enough, most Michigan fans seem pretty confident about the Wolverines chances against the Irish come September 12.  Personally, the Michigan game is one of the games on the schedule this year that I feel more comfortable about considering they’ll be breaking in a new quarterback and lost a whole lot of talent on the defensive side of the ball.