Every year there are a few players heading into their final year or two of eligibility who came in with a lot of hype but have yet to play much or make much of an impact.

Whether it be injuries, poor development, or younger players passing them on the depth chart, some players just don’t make the immediate impact many felt they’d make over their first few years on campus.  Just because a player doesn’t crack the starting lineup in their first two or three years though, it doesn’t mean they are destined to fill backup slots on the depth chart their entire careers.  For every Carlos Pierre-Antonie, there’s a Corey Mays who steps up as a 5th year senior to have a standout season.

Here’s a look at some players on the Irish roster for 2010 who came in with high expectations but are still looking to make their marks in their final year or two. 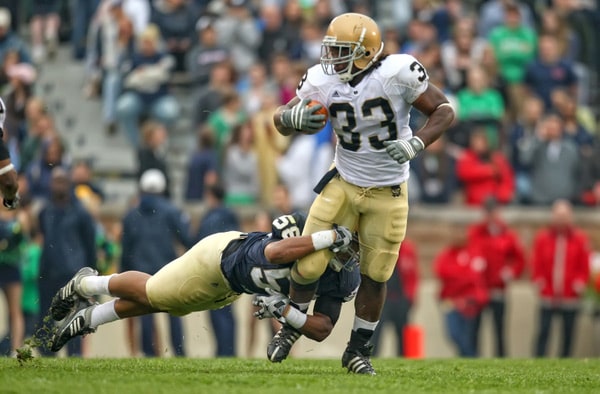 Robert Hughes was one of the few bright spots during the painful 2007 season.  Injuries thrust Hughes into a starting role by the end of the season and he responded with back to back 100 yard performances to close out the year.   Since then he’s topped the century mark just one time – last fall’s laugher against Washington State.  As a freshman Hughes looked like a big back with good vision and excellent balance. He’s been inconsistent ever since.  At times he’ll look to be a power back and other times he’ll try to make smaller defenders miss him instead of running through them.

Heading into his final season of eligibility, he has his work cut out for him.  Fellow senior Armando Allen is fully entrenched as the starter and junior Jonas Gray and sophomore Cierre Wood were standouts during the spring.  Gray and Wood both ripped off long touchdown runs and have shown an extra gear that Hughes hasn’t shown.   Hughes is going to be hard pressed to hold off the younger backs but maybe a new coach is what Hughes needs to live up to the promise he showed in 2007.

According to the South Bend Tribune, Hughes was a workout warrior this off-season joining the “400 bench press, 600 squat” club. Kelly told Eric Hansen, “He’s over 1,000 pounds combined,” Kelly said. “Now he has to play like that.”  Hughes is listed as the #2 running back on the first depth chart of the season, but has Gray and Wood on his heels.

Another senior who burst onto the scene in 2007 heading into his final season after an up and down career is wide receiver Duval Kamara.  The New Jersey native found his way into the starting lineup by mid-season of his freshman campaign breaking several Notre Dame freshman receiving records along the way.  Since then Kamara fell behind Golden Tate and Michael Floyd and struggled to make an impact as the third receiver in the Irish offense before finally slipping behind Robby Parris to the fourth receiver position last season.

As a freshman, Kamara hauled in 32 passes for 357 yards and 4 touchdowns – numbers he hasn’t come close to surpassing the past two seasons.  He’ll start off fall camp as one of the starting wide receivers for the Irish, but like Hughes is going to have plenty of competition.  John Goodman is listed as the backup to Kamara for now and will push him for the starting spot throughout camp.

Wide receiver is a position where Notre Dame has a lot of depth and Goodman won’t be the only receiver pushing for playing time behind Kamara.  Sophomore Shaquelle Evans, junior Deion Walker, and freshmen Bennett Jackson, Daniel Smith, and Austin Collinsworth will all be looking for playing time behind Michael Floyd and Kamara with Theo Riddick, TJ Jones, and Roby Toma battling it out for the slot receiver spot.

Ever since committing to Notre Dame, Kamara has drawn comparisons to former Irish receiver Maurice Stovall.  Through three years of eligibility, their career paths have been nearly identical as well.  Stovall was on the cover of Sports Illustrated less than a month into his collegiate career only to drop off each of the next two seasons before exploding as a senior under a new head coach.  Hopefully for Kamara’s sake the comparison to Stovall continues through this season.

Like Hughes and Kamara, Kerry Neal was a bright spot in 2007.  Neal was originally recruited as a defensive end for the Irish before switching to his more natural position of outside linebacker when Notre Dame converted to the 3-4 defense after the ’06 campaign.  Neal and classmate Brian Smith were quick to see the field while flashing playmaking skills on the perimeter of the Irish defense.   Since then Smith has gone on to become a mainstay in the Notre Dame defense while Neal has bounced around between linebacker and defensive end during the Jon Tenuta years.

Neal has started 16 games over the past two seasons, but has collected just 3.5 sacks and 7.5 tackles for loss in that time.  Part of the problem for the North Carolina native has been playing out of position as  Neal is undersized for an every down defensive end.  With the move back to a 3-4 defense, Neal has moved back to his more natural position as an outside linebacker.

Unfortunately for Neal, he’ll be fighting for playing time at one of Notre Dame’s deepest positions.  In order to fulfill the potential we all saw in 2007 though, he is going to have to wrestle a starting spot away from Smith or junior Darius Fleming all while holding off junior Steve Filer – one of the stars of the Blue-Gold game.

Mike Ragone was one of the highest rated prep tight ends in the country three years ago and early into his career it looked like Ragone was going to live up to the billing.  He had a great fall camp as a freshman and played in 11 games as a true frosh albeit mainly on special teams.  Injuries have really slowed down his progression though.  He missed all of the 2008 season with a torn ACL and last year just didn’t look quite the same.

With Kyle Rudolph firmly entrenched as the starter at tight end, it is going to be difficult for Ragone to truly shine, but in this offense there is going to be a lot of passes to go around and if the Blue-Gold game is any indicator, Ragone could be ready to become the threat everyone thought he would be when he signed with the Irish in February of 2007.  Ragone led all receivers with 75 yards on 6 catches in the Blue-Gold game adding a 4 yard touchdown catch from Nate Montana in the process.

Ragone ran into some off the field issues in the spring, but is expected to be available all season.  He has some talented tight ends behind him challenging him for the backup role, but he should be able to hold them off.  With two years of eligibility, Ragone has a golden opportunity this season.  Most draft experts predict Kyle Rudolph could be an early entrant into next April’s NFL Draft.  Should that indeed be the case, Ragone could play himself into a starting role in 2011 with a strong 2010 season.

One of the biggest question marks on the offensive side of the ball outside of the health of Dayne Crist is who will start at the tackle positions for the Irish.  Notre Dame lost both of its starting tackles from a season ago to the NFL and there is little experience on the roster at the position for 2010.  A pair of senior tackles will be vying for those spots in Matt Romine and Taylor Dever.  At the start of fall camp, Dever is penciled in as the starter at right tackle while Romine sits at #2 on the left side behind sophomore Zach Martin.

Both players have two years of eligibility left, but with a limited number of scholarships left and a recruiting class quickly filling up, a fifth season is not guaranteed for either of them making the 2010 season pivotal for both.  If both end up starting, look for the pair to return for fifth seasons in 2011.  If either, or both, get passed on the depth chart by younger players though, they could be scholarship casualties should Notre Dame have the opportunity to land an additional elite prospect or two in February.

When the official depth chart was released on Friday, one name that did not appear in the two deep at any of the receiver positions was Deion Walker.  The one time five star receiver out of Virginia has had trouble making an impact on the field for the Irish over his first two seasons and despite having three years of eligibility remaining, he faces a make or break season in 2010 with all of the younger wide receivers on the roster.

When they were recruited, people debated which incoming freshman would have the better career – Michael Floyd or Walker.  Two years later people are discussing the possibility of Floyd leaving for the NFL after the end of the season while Walker is still trying to crack the two deep.   After not playing as a true freshman in 2008, Walker played in just five games a year ago and recorded just one catch for 15 yards.

Rounding out this list is the lone fifth year senior in the group.  Darrin Walls came to Notre Dame as one of the most highly rated cornerback recruits in years.  By the second half of his first collegiate game, he was lining up on star wide receiver Calvin Johnson one on one.  By his sophomore season, he held a firm grasp on a starting spot and looked like he was on the way to becoming the first shut down corner for the Irish since Shane Walton.

Then Walls missed the entire 2008 for the oh so vague “personal reasons” before returning to Notre Dame for the 2009 campaign.  He started eight games a season ago but picked off just one pass and recorded only six pass breakups compared to the nine he totaled in 2007.   Despite piling up 63 tackles, he was, like too many Notre Dame defenders a season ago, very inconsistent in the tackling department.

Walls will start fall camp as one of the starting corners for the Irish and should hold onto that spot throughout the season.  He has all the tools to be a great corner for the Irish, but up until this point he hasn’t been able to put all together on the field – in 21 career starts he’s been able to intercept just two passes.  This is his final season of eligibility so this truly is a make or break season for the Pittsburgh native. 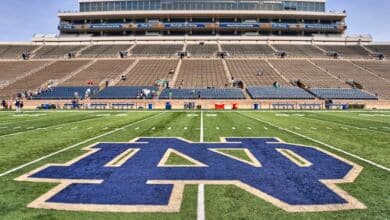