Many people questioned Jeff Samardzija for not entering the NFL a decade ago or attempting to juggle baseball and football. Sticking with baseball, however, has paid off for the Shark. Before the 2016 season Jeff Samardzija signed a 5 year $90 million contract to play with the San Francisco Giants. Now at the age of 32 and perhaps at the prime of his career, Jeff has a lot of great earning potential ahead of him.

Currently, Samardzija has an era of 5.05 with 138 strikeouts. Although the Shark has become a somewhat mediocre starter, his lifetime statistics included a respectable 4.09 era through 304 games, which included an appearance in the 2014 All-Star Game. A respectable major league career from the 6-5, Hoosier from Merrillville, Indiana.

On the flip side, Calvin Johnson Jr. who was in the same class as Samardzija, has already retired from football. The wear and tear of working out, offseason conditioning, and hits to his body were all motives for leaving the NFL. As was the mediocrity of the Detroit Lions we’ve learned recently.  While he was one of the best receivers of all time, his Hall of Fame career is still in doubt because of his limited career statistics hampered by his body.

From a financial standpoint, Johnson’s earning potential is now limited.  While in the NFL he cashed in for $114 million.  Samardzija on the other hand will collect $127 million by the time his contract runs out.  At 35 years old when that contract expires, Samardzija could easily add to that total.

As an average major leaguer, Samardzija will make more than one of the best to ever play the game.  Those critics aren’t heard from much these days.

Now, the rigors of the baseball season should not be completely understated. Major League Baseball teams play 162 games not including spring training or the postseason. Baseball players do not take the contact that football players go through on a regular basis, unless you count bench clearing brawls where the Shark bulldozed through his team on May 29th.

Jeff Samardzija only has to pitch once every 5 games. Although there is a lot strength and conditioning that goes on behind the scenes; his body has definitely benefited from baseball.

Samardzija does not have to worry about the whole concussion issue that has plagued the NFL either. The only form of concussions that he would be involved with are getting hit while pitching or batting (National League Baseball). But baseball players rarely have concussion issues on the same level of NFL players.

Notre Dame fans and college football fans across the country, such as myself, wanted to the see the Shark attempt football. Whether he tried to pull a Deion Sanders and play both sports, or just football alone. From a selfish aspect it would have been breathtaking to see him play in the NFL, but he definitely made the right decision financially and for his health.

Sure he would’ve had success in the NFL, but for how long? The best receiver in his class, Calving Johnson Jr., only played 9 seasons in the NFL and will likely feel the effects on his body for the remainder of his life. Maybe Irish fans won’t see the Shark’s highlights on television as much, but for those who follow baseball he will be pitching every fifth day in the MLB and that is always something to keep an eye on during the long summer months.

Jeff Samardzija made a great decision after leaving college, and at this point it can’t be second guessed. The money, health benefits, and long term sustainability that baseball provides has paved the way for Jeff to live a prosperous life during his career and beyond.

Is the Next Jeff Samardzija on the Notre Dame Roster?

Notre Dame fans will come to know another dual athlete in the upcoming years, via incoming freshman Cole Kmet.

Cole is a 4 star tight end from Illinois. 247 Sports has Kmet listed as the #3 Tight End in the country and #84 player in his class.

He is also happens to be a very talented player on the baseball diamond. This spring Cole batted .392, with 23 RBI’s, and an impressive 7 homeruns. He also was a stud on the pitcher’s mound with an outstanding 1.87 era, accumulating 54 strikeouts in 33.2 innings pitched (according to MaxPreps).

Cole Kmet will play both baseball and football at Notre Dame. He says, “It’s going to be a lot at times but I can’t imagine having to give up baseball.” When asked which sport would be his primary focus Cole stated, “Football does have me on scholarship so they will be calling most of the shots during spring time.”

Notre Dame is a difficult school for student-athletes when they only play one sport. Cole will face a big challenge trying to play both sports. He said, “I’m just going to have to continue to work hard in school and on both fields.” Cole won’t be the only Notre Dame Football player to attempt baseball. He will join the Shark, Golden Tate, and Torii Hunter Jr., to name a few.

Hopefully Kmet can continue the legacy of Notre Dame’s Tight End University, while playing for Aoki’s Irish on the ball diamond during the spring.

Notre Dame & Wisconsin Trying To Get Each Other on the Schedule? 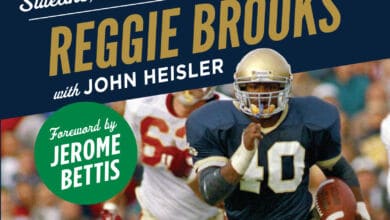 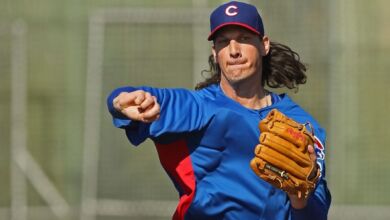