So, sports are gone, you might have heard. The coronavirus pandemic has shut down the sports world, which of course, includes Notre Dame’s spring football (I’ll never curse it again). Jokes aside, as much as people downplay the importance of the spring practice, it was at least something going on. It was a topic of conversation. Heck, even the debate about whether a good practice or a bad practice “meant” anything was a topic. Now, there’s nothing—fear not friends. The internet has an archive of things for us to dive into, such as the day Notre Dame toppled Florida State in what was billed as the Game of the Century.

I was 12 when this game took place. I watched on two VHS tapes on delay, my mom recorded for me, because I had soccer games that day. Because the game was recorded (that wasn’t a regular practice for me yet), I’ve probably seen this game more than any other game since then. I could give you a play by play off of memory with about 90% accuracy.

I re-watched it preparing to write this column, and a couple of things stood out. First, what an incredible production from NBC. Bob Costas doing the pregame on the field, his opening intro to the musical score of Rudy, and the emphasis on the Notre Dame band whenever they played the fight song. It was electric in a way that only college football can be, and because they emphasized the band and pageantry, it felt like the game of the century, being played at the mecca of the sport.

Second, Lou Holtz was good at a lot of things, but he was probably best at getting his team ready to play in big games. He just had a knack for getting his team mentally prepared to perform well when the mental stress was going to be high. NBC showed a graphic during pre-game that Holtz was 14-1 with two weeks to prepare, and the win here made it 15-1. That included bowl games, which were all big during his era, with the one loss being the Colorado debacle when the refs cheated. The man had a talent for performance enhancement.

Rick Minter Played The Bend But Don’t Break To Perfection

Florida State came in with one of the most high powered offenses in football, and quarterback Charlie Ward was going to be the runaway winner of the Heisman trophy. They were destroying teams offensively, so slowing them down was going to be no easy task. Defensive coordinator Rick Minter went with a strategy we’ve seen Notre Dame use often in the years since. He played mostly cover 2 zone, with four down linemen, five defensive backs at all times, and dropped three often. He even flared the defensive end to whichever side the running back released to the flat too in order to take away that part of the passing game, and it was mostly effective. Minter was resigned to the fact that Ward was going to complete passes, but giving up big plays in the passing game would be fatal, and would also allow Florida State to run the ball more effectively.

The game played out just as Minter would have hoped. Ward finished 31-50 for 297 yards, for a pedestrian 5.9 yards per attempt (in all other contests Ward averaged 8.3 yards per attempt). He did throw for three touchdowns to one interception, but he tried to throw many more. Ward was hemmed in by Notre Dame’s coverage, and every time he tried to push the ball down the field, interceptions were there for the taking. Jeff Burris himself had at least three just sitting there for him, if not a fourth.

Those clips don’t include Wooden’s break up at the end, or Brian Magee’s batted ball that fell into the hands of Kez McCorvey for a touchdown on 4th and goal. Minter had Ward’s number on this day.

The subhead should really just say “Lou Holtz could run” because that’s more of what this is, although he and his son did have a knack for when to call a reverse. Teams had to know this was in the bag at least once a game; they did this with Rocket all of the time. But, they were so good with the execution across the board, it often didn’t matter.

Notre Dame ties the game at seven with a perfect one. Florida State happens to be sending everyone with eight in the box, McDougal is able to get the pitch away just before he’s hit, and the biggest variable is All-American Derrick Brooks is asleep on the backside and runs right by the play. From there, Florida State doesn’t have the chance as Notre Dame gets three linemen in front of the play with only the corner to beat, Derrick Mayes mostly whiffs the safety but gets just enough to slow him down, and Jarrell is untouched till he’s past the end zone. It’s a beautiful symphony of everyone doing their part.

(Also, the crowd plus band plus commentary is so good.)

If Notre Dame was going to beat Florida State in this game, they had to win the battle upfront on both sides, and they did. They held Florida State to 96 yards rushing while running for 239 themselves with four touchdowns on the ground to none for the Seminoles. Florida State didn’t get completely run over, but of the four touchdowns, Notre Dame running backs were touched on only two, and that was while they were in the full-house backfield.

Much like Notre Dame could not allow Florida State to throw over the top of them, FSU could not allow Notre Dame to run on them, and they failed at that. If your team is not used to being run at, it can be a shock to the system, and it was no more evident than on the last Notre Dame touchdown. Florida State knows what’s coming, but the Irish win the point of attack, Aaron Taylor hits his guy right in the face, Zellers seals the defensive end, and freshman Robert Farmer has Derrick Brooks trying to run around his block right in the hole. Burris gets grabbed by an arm, but it does no good.

Let’s Do This Again

It’s crazy to think this was the last time Notre Dame won a game like this. They’ve come close a couple of times over the years–USC 2005, Florida State 2014, Georgia 2019–but it just hasn’t happened. The main thing watching it back was how lit Notre Dame stadium was. Those fans believed, and all the heartache and close calls since have jaded everyone. Notre Dame has a chance for a game and atmosphere next November against Clemson. Hopefully, they find this type of performance once again. 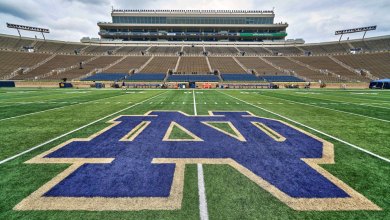