On Juneteenth, the University of Notre Dame, particularly its football program, set a shining example for other Universities around the country.  In particular, Notre Dame’s student-athletes displayed the quality of character that Notre Dame fans can sometimes take for granted in a display of leadership and maturity that is remarkable for a group of college-aged kids at a time when we’re more used to seeing demonstrations of selfishness, privilege, and ignorance by spring breakers breaking quarantines and ignoring social distancing to drink on beaches and in streets.

Notre Dame has stepped up in a significant way over the last few weeks at a time of turmoil and unrest in the country while other Universities have either been unable to get out of their own ways or, worse yet, displayed the kind of ignorance and lack of awareness that has been too commonplace.  See Mike Gundy, for instance.

Up until now, I have not written too much about it because, to be honest, I sometimes consider myself barely qualified to write about something as trivial as a game like football, let alone complex social issues that require more delicacy and nuance than I am really qualified for.  That said, it doesn’t take a sociology Ph.D. to see that what Notre Dame did yesterday on Juneteenth was a remarkably powerful statement from the University.

Brian Kelly has been vocal for the last few weeks that he needs to listen to his players and do more with his platform than he has in the past. Notre Dame as a whole has been amplifying the voices of their student-athletes more so than most universities around the country.

In particular, 5th-year senior defensive end Daelin Hayes has stepped up and displayed maturity and leadership beyond his years.  His speech yesterday was particularly moving.

Hayes was not the only Notre Dame football player to take on a leadership role yesterday, though. Senior Myron Tagovailoa-Amosa opened the ceremonies with a prayer and walkon defensive lineman Max Siegal gave a powerful speech as well.  Brian Kelly gave a thoughtful speech as well.

Notre Dame’s student-athletes have stepped up and displayed a lot of leadership over the last couple of weeks.  Daelin Hayes particularly has made it pretty easy to see that if there is indeed a season this year, he will undoubtedly be one of the team captains.  If there’s not, he has still displayed more leadership than we’ve seen from many Notre Dame captains over the years in his actions just within the last few weeks.

Hopefully, the demonstration and action the University has shown thus far does not end with what happened yesterday, and it continues to use its influence and position to influence change positively.  Hopefully, they continue to amplify the message and voice of its student-athletes the way they have as well.  Even before yesterday, Notre Dame published works by Ajavon Litchfield, Braden Lenzy, and others.

Sadly, a lot of the messages of positivity Notre Dame’s been posting and amplifying on its social media accounts have been met with some ignorance and narrow-mindedness.  Hopefully, those voices continue to be drowned out by those voicing support for what Notre Dame, its administrators, its coaches, and its student-athletes have been doing.

Lastly, hopefully, I did an okay job at finally putting some pen to paper, so to speak on all Notre Dame has been doing.  What they are doing is very important at a moment like now deserves all the amplification it can get. 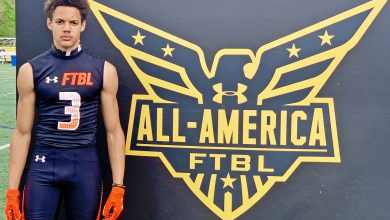