The Notre Dame Fighting Irish didn’t deliver a polished performance in defeating Florida State on Saturday by 42-26. Still, three weeks without game action will make teams rough around the edges. Still, the Irish remain undefeated at 3-0 as they prepare to host the Louisville Cardinals on Saturday.

Under second-year-head coach Scott Satterfield, Louisville had been a Top 25 after their opening game win over Western Kentucky but now find themselves out of the loop after three straight losses. The Cardinals’ defense has been the main culprit in the losing streak, allowing nearly 39 points-per-game in the three defeats.

Below is a look at some of Saturday’s key matchups:

Book had an understated night against Florida State, throwing for 201 yards and two touchdowns. He joined in on the running rampage that compiled 353 yards on the night, finishing with 58 yards on just nine carries and scoring once. Last season, Book picked up 81 yards rushing against Louisville and may seek out more opportunities against Louisville’s weak run defense on Saturday.

The Cardinals defense struggled the most in losses to the Miami and Georgia Tech, allowing more than 450 yards per game. The Irish are averaging nearly 475 yards of offense per game, so they’ve no doubt taken note of their opponents’ defensive woes and will look to strike quickly.

In his second full season behind center for the Cardinals, Cunningham threw for over 300 yards in each of his first two games, but his five interceptions counter his nine touchdown passes on the year. He’s a mobile quarterback who rushed for 50 yards and a pair of touchdowns last Friday night against Georgia Tech.

During the first three games of this season, Williams has had the biggest impact on the Notre Dame offense and is coming off a game in which he gained 185 yards on the ground. After an early fumble, he bounced back to break off a 65-yard run, then later followed with a 46-yard scoring dash. With game-breaking speed, putting the ball in his hands is a simple offensive philosophy that’s paid off this season.

Etheridge enters this game as the Cardinals’ leading tackler, though fellow linebacker C.J. Avery is close behind in that department. He’s been a starter throughout his career at Louisville and knows how to make stops behind the line. In just four games this season, he’s already surpassed his numbers when it comes to that department, collecting 8.5 tackles-for-loss and a pair of sacks.

Even for the most experienced players, Owusu-Koramoah has become a handful, in part because of his quickness and ability to bring down ballcarriers behind the line. Among his 14 tackles this year, four of them have been for losses, and his ability to combine his speed with some lethal hits can force turnovers. He’s currently on pace to again put up outstanding numbers that made his first year with the Irish memorable last season.

Brown could be in for a long afternoon, though the redshirt freshman does possess the versatility to move into other slots on the line. Still, he needs to be zeroed in for this matchup, with his added bulk potentially keeping Owusu-Koramoah in check long enough for the Cardinal offense to make things happen.

Patterson began his career with the Irish at offensive tackle but has since moved inside and thrived during the early going of the 2020 campaign. One of his weaknesses last season was as a run blocker, but that’s changed with the Irish running game having gone into high gear against Florida State. While the player he’s facing is huge, Patterson is no shrinking violet at 6-foot-5 and 300 pounds, so the line play should be worth watching.

Goldwire didn’t make much of an impact during his first two seasons at Louisville but is now showing that he can battle in the trenches. Unlike most players on the nose, Goldwire stands 6-foot-6 and weighs 305 and ended the loss to Georgia Tech with a season-high six tackles, one of those behind the line. In the previous week’s loss at Pitt, he managed to block a pass attempt and recover a fumble.

Notre Dame vs Louisville: What To Watch For 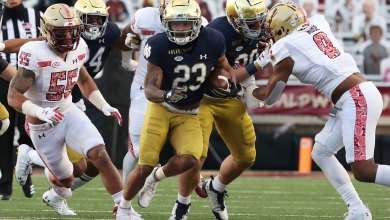 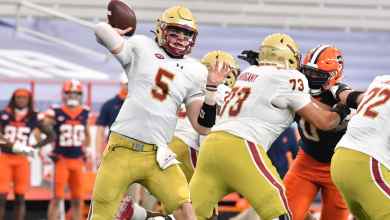 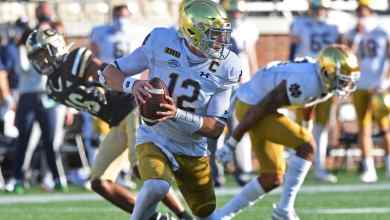 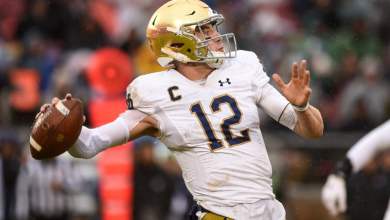