Despite being favored by more than two touchdowns, the Notre Dame Fighting Irish saw their game on Saturday against the Louisville Cardinalshang in the balance before coming away with a 12-7 win. The victory has them still undefeated at 4-0, with that spotless mark keeping them on the path for a November 7th showdown with Clemson.

The Cardinals don’t have a potent offense, which allowed the Irish to keep the clamps on them mostly. Louisville gained only 234 yards of total offense for the entire game, with 83 of those yards coming on their lone scoring drive to started the second half.

Below are some keys aspects of the game:

Notre Dame dominated the first half time of possession, eating up nearly 22 minutes on four drives that amassed 195 yards of total offense and collected 15 first downs. Yet all they had to show for it when the first two quarters had ended were two field goals, primarily due to drives either stalling out or a fake field goal attempt that quickly disintegrated.

The main problem was the surprising Louisville pass rush, with Ian Book sacked on four different occasions in the first 30 minutes. That number that would have been five if the Cardinals hadn’t been flagged for a penalty. Not being able to Contain the blitzes unleashed by Louisville was the problem, with halftime adjustments allowing the issue to subside.

The penalty on the Cardinals that was called back came on a personal foul and was one of two critical mistakes on that drive that allowed the Irish to double their lead. Later in that series, a defensive holding call on Louisville turned what would have been a third-down stop into an automatic first down.

Had that latter mistake not been made, Notre Dame kicker Jonathan Doerer would have a more challenging field-goal attempt in the 46-yard range. Instead, he nailed a veritable chip shot of 30 yards. That helped twist the self-inflicted wounds that Louisville just couldn’t afford to make as heavy underdogs. Such was the Cardinals’ luck that their 52-yard field-goal attempt to end the first half hit the crossbar to keep them scoreless.

The Irish converted on third down eight of 15 times for the game, but it was their final three efforts that helped keep the ball away from the Cardinals down the stretch. While the bulk of that nearly eight-minute drive came on the ground, it was two key pass plays that kept the chains moving.

The first came with Notre Dame facing third-and-six at their own 37 with slightly more than five minutes left, which was when Javon McKinley caught Book’s pass for a seven-yard gain. Later, Book and wide receiver Ben Skowronek hooked up on a 12-yard connection that put in Louisville territory for good. Finally, Kyren Williams broke off a 24-yard run on third-and-five with just over two minutes left.

One of the reasons that the Irish could chew up plenty of time during the contest was due to another solid performance from the running game. While not as prolific as their last two outings, Notre Dame still gained 232 yards on the day, with six different Irish runners contributing.

Topping that list was Williams, who finished with 127 on 25 carries, while Book found room to roam when flushed out of the pocket. Book finished with 47 yards on 12 carries and scored the Irish’s only touchdown in the third quarter on a 13-yard dash that gave Notre Dame the lead back for good.

While the Irish’ overall performance was nothing spectacular, the coaching staff should be pleased that Notre Dame committed no turnovers during the contest. While Louisville didn’t either, they weren’t protecting an undefeated mark with eyes toward a possible national championship bid. Book did tempt fate by twice nearly throwing picks in or near the end zone, but he still has just one on the year.

After four consecutive home games and one postponement in the middle of that stretch, Notre Dame will battle on opposing turf for the first time in 2020. Next week’s opponent will be the Pitt Panthers, who are coming off a loss to the Miami Hurricanes that gave them a season record of 3-3. These two teams first faced each other in 1909, with the Irish holding a 49-21-1 advantage over that lengthy span. In the Brian Kelly era, the Irish have won five of the six games played and won in their last visit in 2015. However, Notre Dame hasn’t managed to win consecutive games at Pitt since their victories in 2003 and 2005.

Highlights from Notre Dame Football's Slog of a Win Over Louisville 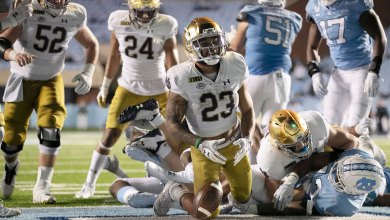 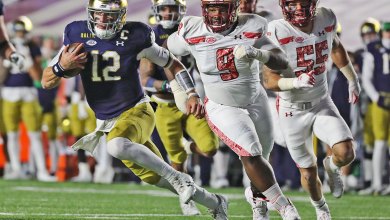 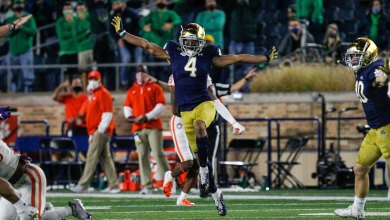 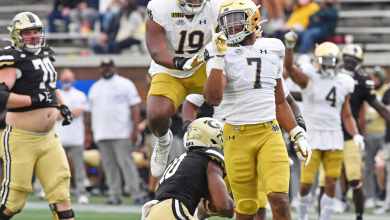