Notre Dame has been having some good success in the graduate-transfer market over the last few years and that success continued on Friday when All-American Cain Madden announced he had selected Notre Dame over Florida State. With his addition to the 2021 roster, the Notre Dame offensive line picture just got a bit clearer.

First off, hats off to Brian Kelly and Jeff Quinn for pulling this off. Most experts felt that Madden was headed to Florida State as recently as last week. Even when news broke that Madden was going to visit Notre Dame this week, most felt the Seminoles were in the driver’s seat. That changed with Madden’s visit and Kelly and Quinn deserve a lot of credit for that.

Now that Madden has selected Notre Dame, it’s safe to assume that he will be starting the season in the starting lineup. It’s highly unlikely that Kelly and Quinn guaranteed a starting position, but it’s hard to imagine a 2nd team All-American transferring to be a backup.

With Madden penciled in as the starting right guard, the only question that likely remains for Notre Dame along the line is where Jarret Patterson and Josh Lugg end up. Both can play guard or tackle so it will be up to Quinn to determine which combination gives Notre Dame the best starting unit.

This also assumes Blake Fisher starts at left tackle which seemed like a safe bet heading out of the spring. Starting a true freshman at left tackle isn’t usually ideal, but Fisher did not look like a typical freshman in the Blue & Gold game.

The only downside of adding Cain Madden to the roster is that it likely eliminates the chance for freshman Rocco Spindler starting the season in the starting lineup, but the future is still very bright for the talented true freshman who was also impressive in the Blue & Gold game.

There’s been some chatter that Notre Dame shouldn’t have needed to add a graduate transfer on the offensive line, but the need only arose because every lineman that could have returned, decided to leave for the NFL. In recent years, that hasn’t been the case. Notre Dame has had better luck in re-recruiting offensive linemen to return for final seasons to boost their draft stocks.

The offensive line was the biggest question mark on the roster in January once it was clear that Notre Dame would be replacing four starters. Part of the answer for the Irish is now a player who was a 2nd team All-American this past season. That doesn’t happen very often. Notre Dame wasn’t in an ideal position, but they’ve done a great job of addressing a need and strengthening the roster heading into fall camp. 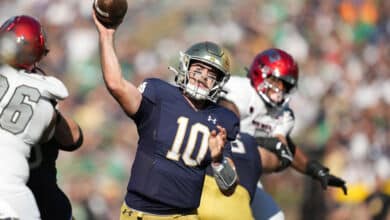