Former Indiana Mr. Football, Jack Kiser, gave Irish fans a glimpse of his potential last year in his lone start against South Florida. The Fighting Irish have a strong legacy of linebackers in South Bend, and this season, Kiser can have a breakout season. Alongside veteran Drew White and new Defensive Coordinator Marcus Freeman, the Notre Dame Linebacker is in a great position to take his game to the next level.

The Irish Linebacker was overlooked coming out of high school. Even with all the impressive statistics, Jack Kiser was only the #7 overall recruit in the state of Indiana, according to 247 Sports. Kiser did not get to play against the level of talent that many other players across the country faced. Pioneer High School was at Class A level in the state of Indiana, which is for schools of 418 students or less.

The size of the school likely played a factor in the rankings, but for Kiser, the small school did not prevent him from becoming Mr. Football. Fortunately, the Notre Dame Coaching Staff does not recruit solely off “star rankings” and from his body of work thus far, it appears the Irish Linebacker is set to have a great season.

There is a strong pipeline of in-state linebackers playing at Notre Dame. Often, in-state recruiting is overlooked for the Fighting Irish, but the state of Indiana has produced a lot of NFL talent, including linebackers Jaylon Smith and Drue Tranquill. Certainly, Jaylon Smith was a 5-star out of high school and destined for greatness, while Drue Tranquill was a 4-star prospect who became an unrivaled leader for the program.

Both Smith and Tranquill became captains and were drafted by the Dallas Cowboys and Los Angeles Chargers.

Jack Kiser and Isiah Pryor will be battling for the Rover position. Head Coach Brian Kelly will likely not announce starters until right before the Florida State matchup. The great thing about the Notre Dame Defense is the talent and depth of the unit. Both Kiser and Pryor will be striving for the starting position, like many of the spots across the Defense.

Early in the season, it may be a combination of the two at the Rover position. Marcus Freeman will have many different looks for opposing offenses this fall and fresh defenders to substitute in throughout the game.

The Irish Defense is one of the best units in the country, and certainly losing a Butkus Award winner is not ideal. Still, the entire defense can go to even new heights in 2021 under Marcus Freeman. Jeremiah Owusu-Koramoah even said, “I expect Drew White to be the best player on the field, even with Kyle Hamilton on the field.”

That may have been a reach, but it just shows how talented the defense will be this year.

Jack Kiser has major potential this season. The Irish Linebacker has a lot of football experience and leadership. In high school, he led his team to back-to-back state championships. Last season’s performance in the South Florida game should have fans excited to watch him compete this fall.

In the Blue-Gold Game, Kiser led both teams with a total of 8 tackles (5 solo). It appears his performance against South Florida is a sign of great things to come.

Depth will define the Notre Dame Defense this season. With the extra year of eligibility that Myron Tagovailoa-Amosa and Kurt Hinish gained due to the pandemic last year, the defensive line is stacked. While at linebacker Jack Kiser, Drew White, and Shayne Simon, are the early favorites to start this fall.

Yet, Marist Liufau, Bo Bauer, and Isaiah Pryor all have the potential to see significant playing time in 2021. Marcus Freeman turned the Cincinnati Bearcats into one of the best defensive teams in the country last fall, and he looks to build off the defensive dominance that Clark Lea established during his tenure in South Bend. 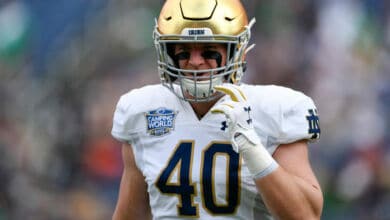 Will Drew White Be Best Player on Field for Notre Dame’s Defense?

From Scout Team to Game Ball: Notre Dame’s Jack Kiser Had a Week 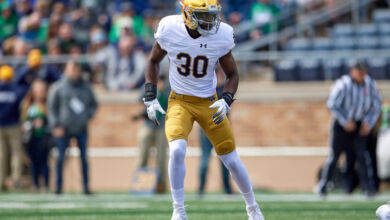