Missed calls happen in college football – and professional, for that matter – all of the time. The calls do tend to even out eventually in most games. Rarely do we get a whole lot of insight into missed calls in a game, but we got some today from the Inside The Garage podcast today. Notre Dame S Kyle Hamilton alleged a referee on Saturday told him he didn’t throw a flag for holding because Hamilton was an All-American.

In the latest episode of Inside the Garage released earlier today, Hamilton said that after a blatant missed holding in the first quarter, the referee came up to him and said, “Kyle, you’re an All-American. I shouldn’t have to call holding on you.”

Here’s a look at a still image of the play. Cincinnati wide receiver Tre Tucker has two fistfuls of Hamilton’s jersey as Desmond Ridder rolled left for an 11-yard gain.

Hamilton and his co-hosts then talked about how messed it was for the referee to say that to him. Connar Ratigan had perhaps the most rationale take on it, saying, that doesn’t change the holding rule.” If anything, the referee’s “rationale” is entirely backward. Of course an All-American is going to get held when the player blocking him is unable to block him. That’s actually how it works most of the time. Not great players have a hard time stopping great players.

Forget how ridiculous of a thought that is, however, and focus on how messed up it is for any referee to come up and say that to a player in the middle of the game. It’s beyond unprofessional and ought to be a fireable offense for whoever the official was if Notre Dame can confirm Hamilton’s account of the incident.

The play in question didn’t cost Notre Dame the game by any means, and it’s not sour grapes for a missed call. Missed calls happen all of the time, and I’m sure Cincinnati fans have some legit grips for missed calls on Notre Dame. Those things tend to even out. The issue here is that the referee came up to Hamilton after and told him that he’s allowed to be held because he’s an All-American. Aside from the ethical issue with the referee deliberately refusing to call a penalty for personal reasons, who knows what that did to Hamilton’s head throughout the game, knowing that the referee was holding him to a different standard?

Brian Kelly was not asked about the incident on Monday at his weekly press conference with the Inside the Garage episode dropping a few hours before. Hopefully, Kelly will be asked about it on Thursday, and the University is looking into this. If confirmed, the official in question, at minimum, should not be allowed to work another Notre Dame in the future.

This is the second weekend in a row officials let penalties go uncalled on Hamilton. Last week in Chicago, Brian Kelly was flagged for a 15-yard unsportsmanlike conduct penalty for his reaction to Hamilton getting cheapshot on a punt return without any penalty being called.

Brian Kelly Not Ready to Publicy Name Starting QB for Notre Dame Yet But... 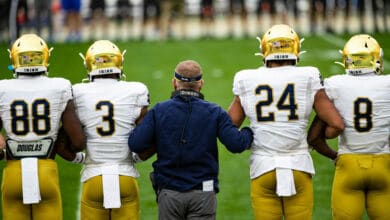