Thanksgiving came a week early for Boston College as Notre Dame head coach Marcus Freeman gave them something to be thankful for as he called off the dogs during the second half of last week’s game. Freeman’s kindness came on the heels of Notre Dame’s domination of the Eagles during the first two quarters. On offense, Notre Dame out-rushed Boston College 214 to 1 during the first half. For the game, the Irish finished with 281 yards rushing on 38 carries (7.4 YPC), including four touchdowns. Notre Dame tight end Michael Mayer caught five passes for 64 yards which helped him become the first tight end in Notre Dame history with over 2,000 career receiving yards.

Running back Travis Dye (knee), linebacker, and Romello Height (shoulder) are out for the season.

Last week, Notre Dame flexed its muscles from both sides of the ball in its shut-out victory over Boston College, 44-0. The Irish offense outgained the Eagles 437 to 173. Notre Dame running back Logan Diggs carried the ball 15 times for 122 yards and one touchdown. Boston College was limited to 117 yards passing, including three interceptions against what is now the 15th-ranked pass defense in the nation. Coincidently, it will also be the highest-rated pass defense the Trojans have faced all season.

The Trojans did just enough to defeat its in-state rival, UCLA, 48-45. USC racked up a whopping 649 yards of total offense, including 470 yards through the air and 179 yards on the ground. Luckily for USC, the offense was firing on all cylinders because the defense struggled at times, surrendering 513 yards. The win over UCLA granted the Trojans a birth in the PAC-12 title game. A win over Notre Dame this week will get them closer to reaching the college football playoffs.

As for the Irish, beating the Trojans would mark its second win over a top-ten opponent this season, and it would also be the second biggest win as head coach in coach Freeman’s career. This week’s showdown in Los Angeles has all the feelings of week one against Ohio State for Notre Dame. Last week’s demolition of Boston College was for the players. Make no mistake about it, this week’s game will be for the head coach, and he’ll make extra sure his team is ready to go. PICK: Notre Dame

Last week, Michigan survived a scare at home to Illinois, 19-17. The Wolverines’ kicker, Jake Moody, nailed a 35-yard field with seconds remaining on the clock to help keep Michigan undefeated. Meanwhile, Ohio State picked up its eleventh win on the season, defeating Maryland, 43-30. Buckeyes running back Dallan Hayden carried the ball 27 times for 146 yards and three touchdowns. Michigan is 7-13 ATS in its last 20 games against Ohio State. Michigan is 1-8 SU in its last 9 games against Ohio State. The total has gone over in 8 of Ohio State’s last 8 games against Michigan. Ohio State is -7.5 across the board, and the total is hovering around 57. PICK: Michigan

UCLA lost a heartbreaker to USC, 48-45. Four costly turnovers did not help the Bruins’ cause. UCLA quarterback Dorian Thompson-Robinson delivered his best shot, throwing for 309 yards and four touchdowns. However, three of his passes went to the wrong team. Cal took care of business at home, defeating Stanford 27-20. Cal is 5-1 ATS in its last 6 games when playing at home against UCLA. The total has gone under in 9 of Cal’s last 9 games against UCLA. UCLA is 4-1 SU in its last 5 games against California. UCLA is -10 across the board, and the total is solid at 61. PICK: California

North Carolina was stung by the Georgia Tech Yellow Jackets at home last week, 21-17. Georgia Tech outscored the Tarheels 14-0 in the second half to secure the win. NC State was also upset on the road at Louisville, 25-10. The Cardinals held the Wolf Pack to 77-yards rushing on 31 carries. NC State is 0-5 ATS in its last 5 games against UNC. NC State is 0-5 ATS in its last 5 games on the road. The total has gone under in 6 of UNC’s last 9 games against NC State. UNC opened at -7, but it is now at -6.5 and could drop to -6 by kickoff. The total is holding steady at 56. PICK: North Carolina

BYU strong-armed the weaker Utah Tech Trailblazers, 52-26. BYU racked up a whopping 676 yards of total offense. Cougars’ quarterback, Jaren Hall, threw for 456 yards and five touchdowns. Stanford lost its eighth game of the season to California, 27-10. The Golden Bears outscored the Cardinal 21-10 in the second half. BYU is 1-8 ATS in its last 9 games. The total has gone over in 4 of BYU’s last 5 games on the road. Stanford is 0-5 ATS in its last 5 games. BYU opened at -5.5 before reaching -6.5. The total also climbed to 58. Pick: BYU

Nevada was eaten alive by the Fresno State Bulldogs, 41-14. Fresno State tallied 524 yards of offense, including 361 yards passing and 163 yards rushing. UNLV took a weekend vacation at Hawaii last week losing 31-25. The Rainbow Warriors outscored the Rebels 24-12 in the second half to add its third win of the season. Nevada is 4-2 ATS in its last 6 games against UNLV. The total has gone under in 4 of Nevada’s last 6 games. UNLV is 4-2 ATS in their last 6 games against an opponent in the West Division.  UNLV opened at -11.5 before reaching -12.5. The total fell from 52 to 49. PICK: UNLV

Wake Forest peeled the Syracuse Orange last week, 45-35. Wake Forest outscore Syracuse by 10 points in the second half, which was also the difference in the game. Both offenses shined for over 1,000 yards. Wake Forest finished with 543 yards to Syracuse’s 477 yards. Boston College was blanked, 44-0 at Notre Dame.  The Eagles were limited to 173 yards of offense, including 56 yards rushing on 36 carries. Syracuse is 5-2 ATS in its last 7 games against Boston College. The total has gone under in 7 of Syracuse’s last 8 games against an opponent in the Atlantic Coast Conference. Boston College is 2-5 ATS in its last 7 games at home. Syracuse opened at -8 before shooting up to -10.5. The total is at 47 across the board. PICK: Syracuse

Clemson embarrassed Miami 40-10. The Tigers’ defense held Miami to 98 yards of total offense. South Carolina exposed Tennessee 63-38. The Gamecocks racked up 606 yards of total offense. South Carolina quarterback Spencer Rattler passed for 438 yards and six touchdowns. South Carolina is 1-4 ATS in its last 5 games against Clemson. The total has gone under in 4 of Clemson’s last 5 games against an opponent in the Southeastern Conference. The line fell from -16 to -14.5. The total climbed two points to 52. PICK: Clemson

S2E37: Notre Dame Blowing Out Boston College is Fun. Can the Irish Keep the Good Vibes Going Against Southern Cal?

Notre Dame - USC Hype Video: It's a Privilege to Play for Notre Dame 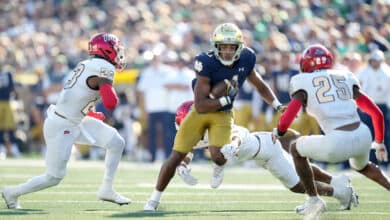