Notre Dame’s need to take a transfer at safety wasn’t quite as large as it was at quarterback, but it was pretty darn close. With Brandon Joseph off to the NFL and Peyton Bown flipping, twice, at the 11th hour, the Irish needed an experienced safety from the portal. Just a day after they landed prize quarterback transfer Sam Hartman, they got a safety as well in Oklahoma State transfer Thomas Harper.

Harper comes to Notre Dame with one year of eligibility left after playing in 42 games for Oklahoma State over the last four years. Injuries limited him to seven games in 2022, but he still made 30 tackles with 1.5 TFL. He had one interception and three passes defended on the year.

With Joseph off to the NFL, Ramon Henderson and Xavier Watts are the only returning safeties with starting experience for Notre Dame for sure returning in 2023. The roster does have a glut of young, inexperienced defensive backs between safety and corner, but none have seen the field outside of mop-up duty or special teams.

5th-year senior DJ Brown is eligible to return, but it’s not clear yet if he will use the free COVID year for a 6th year at Notre Dame, attempt to pursue the NFL, enter the portal himself, or move on from football as wide receiver Braden Lenzy did earlier this week. Brown logged 504 snaps, 7th on the team and the most of any safety, but graded out as the 37th best defender for the Irish on PFF. Brown made 33 tackles on the year but also had a missed tackle rate of 19.8 per PFF.

Missed tackles were a challenge for Henderson in 2022 as well. PFF gave Henderson a 28.6% missed tackle rate. Watts graded out much better at just 6.8%. Harper is intween the two at 18.9% on the season in 397 snaps for the Oklahoma State defense.

The only other player set to return listed at safety in 2022 is Justin Walters, who redshirted in 2021 and played just 24 snaps this season – all of which were on special teams. Walters’s classmates Ryan Barnes, Philip Riley, and Chance Tucker are all corners but have been passed by freshman Benjamin Morrison and Jaden Mickey and could get looks at safety this spring.

Notre Dame also added Adon Shuler and Ben Minch as part of the recruiting class of 2023 – both are early enrollees who will be on campus later this month. However, how much either is ready to contribute as a true freshman remains to be seen.

Notre Dame got spoiled with three years of stellar safety play from Kyle Hamilton. Hamilton graded out at 79.5, 76.7, and 76.1 over his three years at Notre Dame per PFF. His missed tackle rate dropped from 18.2% to 6.5% by his junior season. As a junior, the NFL QB rating for opposing quarterbacks when they targeted Hamilton was 42.3. No safety on the Irish roster in 2022 allowed worse than 70.7 (Brandon Joseph).

When Joseph transferred to Notre Dame last year, the hope was that the Irish were getting a playmaker who could replace what they were losing with Hamilton off to the NFL. That didn’t happen. While Joseph was solid in coverage – only Benjamin Morrison allowed a lower QB rating to oppose QBs – the big plays weren’t there en mass. Joseph did deliver a huge defensive touchdown against Syracuse that set the tone for the game, but that was his only interception of the season. He was also sound tackling with the lowest missed tackling rate among safeties. He didn’t force any fumbles, though, while recovering one. So Joseph was a fine safety in terms of coverage and limiting big plays – he didn’t allow a reception over 16 yards as a primary defender – the impactful plays just weren’t there.

Had Peyton Bowen stuck with his commitment to Notre Dame, there was a solid chance he would have been an opening-day starter for the Irish – or at least a member of the rotation ala Hamilton in 2019. Without him and Joseph, though, Notre Dame had a big need at safety.

Landing Thomas Harper was a great step in the right direction of plugging some holes in the secondary in the short term while the staff looks to continue to restock the secondary on the recruiting trail long term.

What is Notre Dame Getting in Javontae Jean-Baptiste? 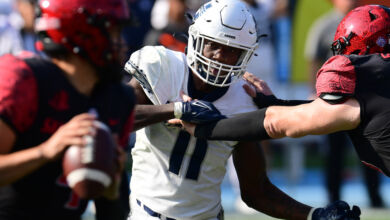