There were plenty of big names in South Bend this weekend. Players of old like Brandon Wimbush and Torii Hunter Jr were spotted on the sidelines Saturday.  It wasn’t just former Irish standouts in attendance, though. The Irish hosted some of the nation’s elite football talent, and a few of them decided they would like to spend a little more time in South Bend as two Four-star recruits committed for NDs 2021 class.

On Saturday, highly sought after wide receiver prospect Deion Colzie out of Athens, GA announced he would be attending Notre Dame. Colzie is the No. 95 ranked player on Rivals for the 2021 class.

The Alabama Crimson Tide and Georgia were both in heavy pursuit of 6’4 Four-star receiver, but Georgia couldn’t convince him to stay home.

It was long believed that Colzie would end up in South Bend as Colzie had made comments indicative that Notre Dame was the school he wanted.

The excitement didn’t end with Colzie because on Sunday, another big recruit decided Notre Dame would be his new home as four-star Athlete Lorenzo Styles Jr of Pickerington Central in Ohio committed to the Irish.

“Commit to the LORD whatever you do, and he will establish your plans.”

Styles is the number 28th ranked prospect in the rivals 100 for the class of 21. Styles is listed as an Athlete, but it’s believed he’d prefer to play wide receiver, which is what might have sealed the deal for the Irish.

Ohio State was the main competitor for Styles due to his growing up in Columbus as well as the fact this his Dad played for the Buckeyes, but Styles apparently wasn’t keen on the idea that Ohio State wanted him to play in the secondary instead of on offesne.

The two commitments moved Notre Dame to number 1 in the class rankings in the country for the 2021 class as all 7 of their commits are four-star prospects, and all seven are ranked in the Rivals 200.

Many people believed Brian Kelly’s class of 2013 could never be topped with four players in the Rivals 100, but the 2021 class is well on its way to exceeding that. Styles and Colzie now give the Irish 2021 class five players in the top 100.

The addition of these two elite receivers also addresses the most prominent problem Notre Dame has had to make the jump with the elite programs. These receivers can give the Irish elite speed and playmaking on the outside.

What separates the Irish from the elite schools ( OSU, Bama, Clemson, Georgia) is that elite athleticism on offense. Having that guy who can make plays when your team needs it.

The Irish have Chris Tyree and Jordan Johnson coming in the 2020 class who are both top 100 recruits, but it’s very encouraging to see Notre Dame follow that up by getting a few elite guys in back to back classes.

Fans should keep an eye on the recruitment of Will Shipley too.  The running back from North Carolina could be another big-time athlete in this class. Shipley is the 53rd ranked recruit for 2021 on Rivals. Notre Dame is new to the race on Shipley, but have seemed to make good impressions quick.

#NotreDame hosted five-star RB Will Shipley on Saturday and it looks like the Fighting Irish made a major impression.

"Notre Dame is really something special."

Brian Kelly, Lance Taylor, the fans, everyone laid out the red carpet.

“It’s probably my favorite group of 2021 commits I’ve spent time with. I know all of them and I communicate with all of them.” – 2021 Four-Star RB Will Shipley (@willshipley2021) https://t.co/veL2DRUYTX

Perhaps the most encouraging thing about these two commits is the places Notre Dame landed them from. The Irish went into Athens, Georgia and took away an elite receiver from the Bulldogs. Georgia has recruited as good as anyone in the last few years.

Then they went into the heart of Buckeye land and took an athlete from Ohio State in their own backyard. Ohio State is tough to beat on any recruit much less a Columbus kid.

Irish recruiting has been spectacular lately, and they are not backing down from going head to head with big programs for elite talent. This is the final step Notre Dame has to take to be all the way back. Let’s be the school that puts out elite talent again. 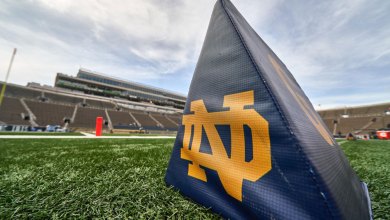