In case you weren’t aware, Notre Dame and Stanford play for the Legends Trophy every year.  Notre Dame hasn’t had possession of it since 2014 after three straight losses to the Cardinal. Brian Kelly had a message for his team earlier this week apparently that if they won, he would be drinking out of that trophy Saturday night.  They won.  He drank red Gatorade out of it.

I’m sure some will roll their eyes at this, but you know what?  This was freaking awesome and this is the kind of things that the players love to see their coach do.  After three straight losses to Stanford all of which came in excruciating fashion, the Irish earned the right to celebrate last night.  Kelly, who made the controversial call to change quarterbacks with a 3-0 record at the time, earned the right to celebrate last night too.

Notre Dame has raised the ceiling on their season the last two weeks considerably.  Suddenly a run to the playoffs seems almost likely if the Irish can get past a tough road game next weekend at Virginia Tech.  The schedule, which looked daunting, all of a sudden seems to be breaking just right for the Irish.

Next week is obviously a brand new challenge, but for now watch this video a couple times and soak this one in because Notre Dame fans earned the right to celebrate this one too.  The last few losses to Stanford have been of the debilitating variety.  So grab some red Gatorade of your (or something stronger) and soak this one in.

Beyond the Boxscore: Notre Dame's Stars Power Irish Over Stanford 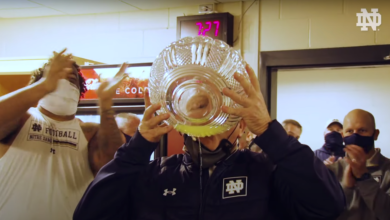