Over the weekend, Greg and I hopped on the video call with a blast from the UHND forum past – poster Jack Daniels – to record a podcast.  We’ve been talking about doing a podcast for a while now, and since we were all going to be stuck indoors for a while, we figured why not now.  We talked about a few different topics, but the first one was what are the players that we’re most upset about having to miss this spring with spring football across the country canceled.

Note: the full video podcast was an hour-long, so we’re breaking it into segments here and posting as articles as well.  If you have some time to kill and want to watch the full thing, you can find it on our YouTube channel. While you’re there, make sure to subscribe to our channel!

The overwhelming answer for the player we most wanted to see this spring was running back Jafar Armstrong.  The rising senior entered the 2019 season with huge expectations, but injuries reared their ugly head again for Armstrong a year ago.  By season’s end, Armstrong was “healthy,” but his role had greatly diminished, as Greg pointed out.

This spring would have been a chance for Armstrong to stake his claim to the top running back spot before freshman Chris Tyree lands on campus in July – assuming freshmen are able to report in July as expected.  With that in mind, this was a bit of a do or die spring for Armstrong. Is he ultimately suited for another position than every-down running back?  We will have to wait to find that out.

Tariq Bracy and the Young Corners

Greg was hoping to get some answers at corner where Notre Dame is replacing Troy Pride.  Is Tariq Bracy ready to be a lockdown corner that can line up on an opponent’s WR1?  He’shown some promise throughout the last two seasons, but hasn’t done so consistently. Lining up against Notre Dame’s receivers would have given him a wide variety of experience from the speed of Braden Lenzy to the all-around game of Kevin Austin to the size of Bennett Skowronek.

Then there are the early enrollee freshmen.  Assuming there is a full season, Notre Dame is going to need at least one freshman corner to play this fall.  Caleb Offord and Ramon Henderson got just one practice as part of their early enrollment.

All the Wide Receivers

Notre Dame is replacing a ton of offensive firepower with Chase Claypool, Chris Finke, and Cole Kmet headed to the NFL.  There is a lot of talent on the roster to fill their roles, but they need every snap they can get right now in this offense. I didn’t let Greg or JD pick Kevin Austin as a player they wanted to see this spring because we all wanted to see that, and it would have been waaaay too easy.

Outside of Austin, though, the three of us brought up almost every other wide receiver expected to make an impact in 2020.  Is Braden Lenzy ready to be a starting receiver?  I was hoping to see that this spring.  What will we get from Lawrence Keys and is Bennett Skowronek capable of providing the offense one of those huge target, big-bodied receivers similar to what they had in 2005 with the combo of Jeff Samardzija and Maurice Stovall?  JD was looking forward to seeing that this spring.

And how about Xavier Watts?  Greg pegged him as a potential early impact player for Notre Dame and has been on the Watts hype train since last summer.  That train is still in the station without spring ball.

Remember Houston Griffith?  A lot of Notre Dame fans seem to have forgotten him, but let’s not forget he was a top-100 overall talent just two years ago.  Notre Dame moved him around a lot the last two years, but he was (hopefully) permanently moved back to safety mid-season and could be in line for a starting spot this fall.  In fact, he might be positively and negatively impacted by missing the spring.

On one hand, Griffith needed the reps at safety after playing multiple positions so that could hurt him, but on the other hand, his familiarity with the system could give him a leg up on Isiah Pryor who, by the way, looked absolutely shredded in the limited footage we got from spring ball.

JD brought up a great comparison to Harrison Smith, who also moved around a lot his first two seasons before finally finding a home at safety and ultimately turning into an All-Pro NFL safety.

I was surprised that no one mentioned Ian Book until I did, but it led to an interesting conversation around Book’s ceiling.  To me, this team goes as far as Ian Book takes them.  He doesn’t have to transform into the next Joe Burrow, but he has to be a better version of himself in 2020 for this team to reach its goals.

JD referenced Dan Orlovsky being on Pete Sampson’s podcast recently, and he mentioned that the approach Chip Long took with Book last of being a “damn game changer” was the exact wrong approach with a QB look Book.  He isn’t Trevor Lawrence or Tua.  He is who he is, and that’s a damn good quarterback who is a generational talent like those two.  Orlovsky, who I am a giant fan of for his Pro Carson Wentz stances, said that what Notre Dame needs of him is to take his skills and use them efficiently.

One of the major concerns here for Book is how all the lost time this spring will impact him considering all of the lost production the offense lost with its top two targets headed to the NFL. Still, the way that Book maximizes his talents this year isn’t raising his ceiling; it’s being more consistent in his execution.

This covered the first portion of our podcast and what we discussed. We’ll post another breakdown tomorrow. 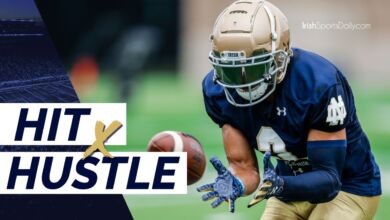 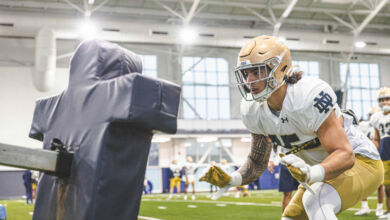