Sporting News’s Matt Hayes published a list of college football players who are ready to breakout this year and Notre Dame wide receiver Duval Kamara was on his list. TSN columnist had this to say of Notre Dame’s sophomore wideout: 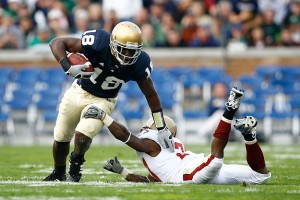 WR Duval Kamara, 6-5, 222, So., Notre Dame. Scout’s take: “Saw them twice last year, and he’s the only guy on offense who looked comfortable. He knows how to get off the jam (at the line of scrimmage), knows how to use his hands to separate. He’s got good speed. Once he figures out how to use his big frame to shield himself, he’ll be a terror. No one in college football will be able to match up with him — no one.”

While he probably shouldn’t have admitted that his analysis of Kamara was based on only seeing him play twice, it’s still nice to see Kamara getting some pub this pre-season.

After a very impressive freshman season (considering the offense in general), Kamara could be poised for a pretty big year if the Notre Dame offensive line holds up. I was a little concerned with the number of drops from Kamara in the Blue Gold game, but at this point it really won’t matter unless the o-line improves enough to give Jimmy Clausen enough time to get Kamara the ball.

Kamara has all of the tools to be a bigger, stronger version of Maurice Stovall. It took Stovall till his senior year to fully realize how to utilize his size to the best of his ability, but that was partly due to the inept coaching he received prior to the arrival of Charlie Weis and wide receivers coach Ron Ianello. Hopefully Kamara’s learning curve is not as steep and the New Jersey native starts dominating defensive secondaries this season.

Catching Up with Michael Stonebreaker

Brian Polian Getting Some Props