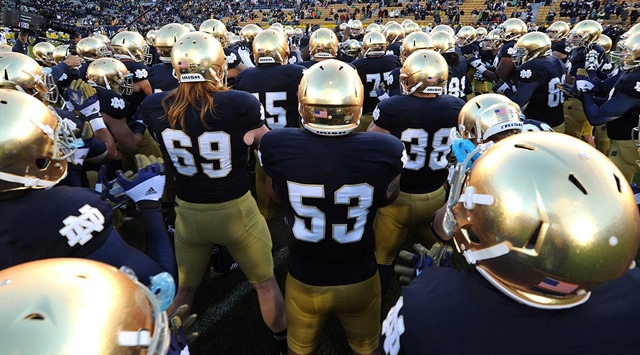 Notre Dame is 4-0 for the first time in ten years on the strength of a team effort in all phases of the game. Veteran players such as Manti Te’o and Theo Riddick continue to be catalysts; players such as Stephon Tuitt, Louis Nix, and Bennett Jackson are taking their game to the next level, and young players Elijah Shumate, Sheldon Day, and KeiVarae Russell among others are making an instant impact. However, how have the Irish played in each individual facet of the game?

Coming into the season there were plenty of questions surrounding the Irish offense, from how would Everett Golson play, to how would the offense replace Michael Floyd, and can turnovers be cut down on. Everett Golson has had ups and downs so far this season completing 56% of his passes for 641 yards and three touchdowns; however, he also has turned the ball over on four occasions and has been pulled in favor of Tommy Rees on two instances. Overall the Irish quarterbacks have done what they’ve been asked which is to manage the game and limit turnovers in order to aid the defense.

The Irish are averaging 211 yards per game passing and the team’s leading receiver is DaVaris Daniels with 159 yards receiving. A close second is all-American tight end Tyler Eifert with 158 yards. Eifert only has one reception in the last two weeks as defenses eliminate him from the game in an effort to make someone else make plays. The other Irish receivers such as TJ Jones and Robby Toma need to make more plays to free up space for Eifert, also the Irish must stretch the field with freshman like Chris Brown and Davonte’ Neal.

Finally the strength of the Irish offense was supposed to be its offensive line and running backs. Apart from the domination of Navy the Irish have struggled to establish the run. The Irish have 561 yards rushing this season, on 3.8 yards per carry, and eight touchdowns, but without the Navy stats the team has only run for 268 yards and three touchdowns on 2.7 yards per carry. Those totals are not good enough to maintain a winning form over time. The Irish’s three headed monster of Cierre Wood, Theo Riddick, and George Atkinson III, will need to produce explosive runs on a more frequent basis in order for the Irish to be successful. Furthermore the Irish offensive line needs to improve inside so that the Irish backs can run in between the tackles and avoid being forced into a one dimensional passing offense.

The Notre Dame defense has been without a doubt the strength of the team, and is announcing itself as one of the best defenses in the nation outside of the top end of the SEC. Led by Butkus award candidate Manti Te’o the Irish front seven has been going gangbusters so far this season. The Irish already have 22 tackles for loss and are well on their way to crushing their total of 25 sacks last season with 14 through four games. They are also creating turnovers at a torrid pace with eight interceptions, already equaling last season’s total, and five fumble recoveries, just one shy of last season’s total of six.

The Notre Dame defense has been extremely stout against the run allowing opponents only 3.3 yards per carry and have yet to allow a rushing touchdown this season. The front seven’s strong play against the run has allowed them to help an inexperienced secondary in pass-coverage by making the opposing offense one-dimensional and limiting one-on-one matchups for the Irish’s raw corners.

With Jamoris Slaughter’s season ending injury, Zeke Motta has been forced to take a leadership role in the secondary and has responded well with 26 tackles, second only to Te’o, and is often responsible for putting the Irish cornerbacks in the right position. Due to the tutelage of Motta and the coaching staff Bennett Jackson, KeiVarae Russell, Elijah Shumate, and the rest of the Irish corners are making visible strides every game, and will need to continue to get better with elite passing offenses Oklahoma and USC on the schedule.

With two of the Irish’s four games being decided by seven points or less and the offense sputtering versus Michigan State special teams have been key to controlling field position, which has been of paramount importance to the team’s victories. Punter Ben Turk has played strongly this season averaging just under 41 yards per punt, with seven punts inside the 20. Turk has also seldom shanked punts to leave the Irish defense in a bad position, a tendency of his in the past.

Sophomore Kyle Brindza has solidified his job as the starting kicker, connecting on 6-7 field goal attempts this season with a long of 47 yards. Brindza has also been solid on kickoffs with ten touchbacks on 23 kicks.

Return sensation George Atkinson III has yet to repeat his stellar form from last season averaging 23 yards per return with a long of 32 yards. New punt returner DaVonte’ Neal has yet to make waves in the return game but he has been an improvement over the debacle at the position last season, as he has yet to lose a fumble and has the ability to make plays instead of constantly calling for a fair catch.