Hurricane Matthew made landfall in Haiti tonight as one of the most powerful hurricanes to blow through the Atlantic in a decade.  The category 5 (on a scale of 1-5) storm is expected to make landfall in the mid-Atlantic region this weekend and could impact to date, time, and possibly even the location of this weekend’s Notre Dame – NC State showdown.

“I think everything is on the table,” Brian Kelly said at his weekly Tuesday presser.  According to Kelly the officials from the ACC, NC State and Notre Dame have been in pretty steady contact regarding the potential impact weather wise on the game.

As of now, however, the plan is to play on Saturday at noon as scheduled.  That of course, could very well change depending on the path of the storm.

Current models for the storm are predicting the storm to hit the Carolinas on Saturday and the governor has already issued a state of emergency and ordered evacuations for those along the coast.  Raleigh is not a costal town could still see large amounts of rain and high winds.  Current forecasts for Raleigh are calling for anywhere from 3-5 inches of rain and 20-30 mph winds on Saturday.

Notre Dame has informed the ACC that it is able to play the game anytime between noon on Saturday and noon on Sunday.  “We’ve given them a window that we’re available to play this game from 12:00 until noon on Sunday,” Kelly said on Tuesday. “We feel like anything after noon on Sunday starts to encroach on our ability to prepare for Stanford.”

One rumor that began circulating on Tuesday that Kelly shot down – at least for now – was the idea of playing on Friday.  “There has not been any talk about moving it to Friday.”

ACC officials held a conference call on Tuesday and are planning on another call on Thursday but also stated they will be monitoring the situation and could have another call before then.

There hasn’t been any reports of credible talks of moving the game to another location at this point either.

It should be noted the same situation occurred last year when Notre Dame traveled to Clemson.  Record rainfalls and flooding throughout South Carolina that weekend ended up not impacting the day, time, or location of that contest.  It did impact the playing conditions though and Notre Dame is using that lesson to prepare this weekend.

“(Against) Clemson (we) threw it every down in the fourth quarter. Just try not to turn it over and get too far behind in the game,” Kelly said.  Against the Tigers Notre Dame was down 14-0 before you could blink.  Conditions lessened in the second half, however, and the Irish were able to move the ball in the air.

“We are very good at moving the ball and throwing the football in most conditions, unless the wind becomes at a point where the ball just can’t be moved through the air. Then we get into formations that we already have in our system and we’ll employ those.”

Mike Denbrock said on his weekly radio show on Monday that Notre Dame is preparing two game plans – one for adverse weather conditions and one for normal conditions.

This will be something to watch closely all week.  While Kelly has said they would be OK moving the game to Sunday, any lost time preparing for Stanford will obviously impact Notre Dame’s chances.  The conditions themselves could severely impact the outcome of the NC State game with Notre Dame’s running offense struggling. 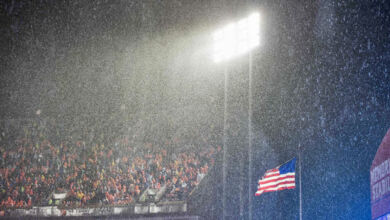 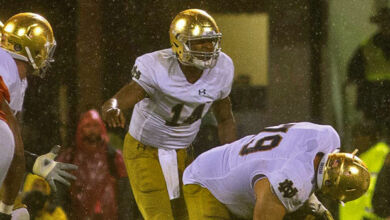 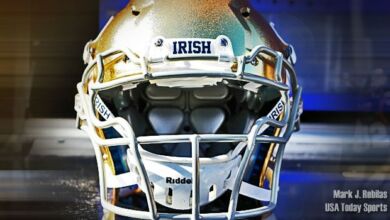 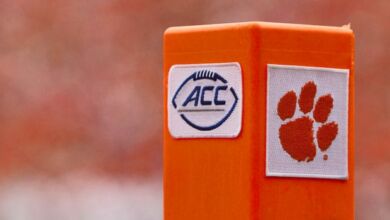