Just over a week after halting football activities due to an outbreak of COVID-19 within the program, Notre Dame is returning to the practice field today signaling that the October 10 visit from Florida State should not be impacted baring any changes on either side.

When Notre Dame returns to practice today, they will still be without a number of players who are either isolating because of a positive COVID-19 test or in self-quarantine due to contact tracing. Brian Kelly has reportedly said, however, that he expects 90% of his team to be available for practice by the weekend.

In the same report stating that Notre Dame would have 90% of the team back practicing this weekend, Kelly stated that they have traced back the outbreak to a pre-game team meal prior to the South Florida game and a player who vomited on the sidelines during the game who was only treated for dehydration at the time.

Assuming Notre Dame has 90% of it’s team available by the weekend, the Irish should be more than equipped to play next Saturday. How well they are equipped to beat a Florida State team that looks like a bit of a mess right now, however, would still be dependent on who makes up the 10% of the team that isn’t available.

Aside from the Florida State game looking to be very much back on track, the key finding from this outbreak is that Notre Dame learned that transmission of COVID-19 from the game itself was very low. That gives at least some bit of optimism for the rest of the season.

Notre Dame has not practiced since the South Florida game on September 19. The Irish were set to return to the practice field last Tuesday before having to shut down practice and postpone last weekend’s Wake Forest game until December 12 shortly after.

Florida State has had their own challenges with COVID as well including their head coach Mike Norvell contracting it a few weeks ago so we might not be totally out of the woods yet, but all of this is at least some positive momentum for Notre Dame returning to action on October 10.

Notre Dame Could Get Kevin Austin Back Next Week 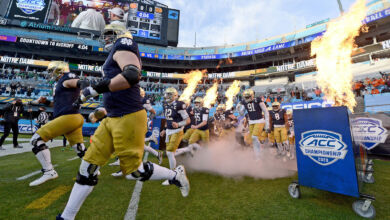 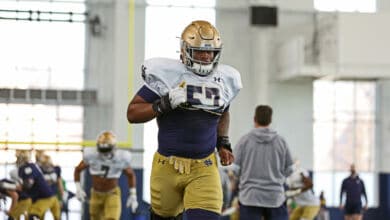