The 2021 home opener for the Notre Dame Fighting Irish has a bit of history attached to it because it marks the school’s first-ever meeting with the Toledo Rockets. The Irish have yet to lose to a MAC school in five previous clashes and this contest figures to go the same route, with the Rockets in the role of heavy underdogs in the matchup.

Toledo head coach Jason Candle is in his sixth full season in that role, though he’s been a member of the school’s coaching staff since 2009. He’s compiled a 39-21 record as head coach, including the 49-10 rout on Saturday against Norfolk State, and is coming off a COVID-shortened 4-2 mark last season.

Some of the key matchups to watch in this Saturday’s clash include:

Coan avoided making any real mistakes during a solid debut with the Irish on Sunday night, throwing for 366 yards and four touchdowns. He was sacked four times with Notre Dame’s revamped offensive line getting their first chance to gain their bearings. The expectation is that Coan should have more time to do damage against Toledo and sharpen his touch in the process.

In their first outing of 2021, the Rockets’ defense managed to collect two turnovers, an area where they struggled last season. They also blocked a pair of first-half punts that were returned for scores, but the level of competition increases significantly for this game. Finding a way to harass Coan serves as a key building block for any possible upset.

The Notre Dame defense delivered plenty of pressure against Florida State with five sacks but also gave up 18 fourth-quarter points that sent the game into overtime. The Irish also allowed 264 yards on the ground, including an 89-yard touchdown run. Sustaining that pressure throughout the game and limiting missed tackles are steps to improve that will begin with Toledo.

Bradley and Dequan Finn will likely be interchanged during this game, but Bradley is the passer in this duo. Last year, Bradley threw for nine scores, but he was also picked off five times in 89 attempts. He does possess enough mobility to escape from the backfield, which gives the Irish defenders on the outside something to focus on.

Mayer started the 2021 campaign off with a bang, with nine receptions for 120 yards and one touchdown. That score came on the opening series of the game, with his three grabs accounting for 67 of the 75 yards of the Notre Dame drive. On two occasions, he ended up dropping balls, including one that might have helped avoid overtime. He could have a field day against Toledo, with the hope being that the drops were a brief glitch.

Bauer is an athletic player who will have his hands full trying to keep pace with Mayer. In the Rockets’ opening rout of Norfolk State, Bauer had a quiet night with just two tackles, a luxury that won’t exist against the Irish. He’s giving up four inches to Mayer and will have to find a way to neutralize the tight end’s effectiveness or it could be a long afternoon.

White is arguably Notre Dame’s team leader on the defensive side of the ball and remained busy with 10 tackles on the night against Florida State. He got plenty of help from his teammates and should remain active against Toledo, though the fourth quarter struggles to stop the Seminoles were a problem that needs to be alleviated.

Koback isn’t a game-breaking back, but he’s shown he’s capable of picking up tough yardage. During his first two seasons, he averaged over six yards per carry and scored 26 touchdowns over that time frame. Those numbers took a dip last year, but he still remains a threat not only to carry the ball but also as a possible receiving outlet.

Hinish was part of an Irish defensive line that was putting constant pressure on Florida State but struggled to shut them down for good. As a veteran on the line, he’s a reliable presence whose numbers don’t always show how effective he can be to the Irish defense.

Like Hinish, Harris is a key aspect of the Toledo line and serves as a leader for the Rockets. Harris has been part of this unit since 2016, though he was forced to miss the 2019 season due to injury. He’s a smart player who played an effective role last season in helping Toledo average 35 points during their COVID-shortened six-game season and then tally 49 in the season opener. 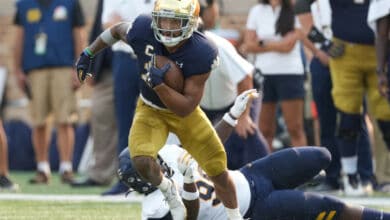