Despite a relatively easy win on Saturday, the Notre Dame Fighting Irish have no time to dwell on that victory. That’s because they face a stiff challenge on the road Saturday against the Syracuse Orangemen, who they’ve defeated in each of their last four meetings. However, the Irish now find themselves in the role of underdog against this Top 25 opponent.

The Orangemen enter this contest with a 6-1 record and are coming off their first loss of the 2022 campaign. That 27-21 defeat came at Clemson and was the result of a fourth-quarter slide in which the Syracuse defense gave up 17 unanswered points. The Orangemen forced four turnovers in the game but flags against them at inopportune times cost them dearly.

Below are some of the key matchups to focus on for Saturday’s game:

In Saturday’s win over UNLV, Pyne delivered an average performance, throwing for 205 yards and two scores as well as an interception in the final minute of the first half. That pickoff came not long after he’d been taken out briefly after taking a hit from a Rebels defender. His range of receiving options was limited to just four players, with Michael Mayer accounting for nearly half of his 14 completions. Against Syracuse, he’ll need as many choices as possible.

Prior to Saturday’s meeting with Clemson, the Orangemen had only faced one other Top 25 team this season. Syracuse has mostly been able to deliver a solid run defense but stopping the passing attack of Purdue was a problem. In that game, they allowed 424 yards through the air, with most of the receptions coming on short tosses. Having Pyne follow suit in this game may be the best strategy for the Irish.

The Irish defensive effort against UNLV had some notable moments but it also saw some continuing glitches that have plagued this unit. The main issue is giving up big plays by opponents, with runs of 74 yards and 47 yards, respectively, the highlights of two UNLV scoring drives. Breakdowns like this as well as blown passing coverages are something that have to be avoided to give Notre Dame their best opportunity at a win.

Shrader, who’s 6-foot-4 and weights 230, is having an excellent season and has already surpassed his numbers from last season. Despite that size, he’s got the mobility to get out of the pocket and take off, which means that making his life more difficult is a priority for Irish defenders. Shrader started his collegiate career at Mississippi State but is showing his effectiveness in the Syracuse lineup, connecting on nearly 70 percent of his pass attempts. That number explains why his 13 touchdown passes have only been marred by four interceptions.

Bertrand again paced the Irish defense against UNLV by leading the team in tackles for the afternoon. He’ll have his hands full on Saturday but needs to be at his best this week. He also needs to avoid what’s almost become a regular feature: getting flagged for targeting. That nearly happened again on Saturday and given the challenge facing the Irish this week, having Bertrand around for the entire game is a necessity.

Tucker is the most dangerous part of the Orangemen’s offense. Last year, he gained nearly 1,500 yards on the ground and has 698 after seven contests this season. He’s got plenty of speed and hits potential tacklers hard and in addition to his running skills, he’s already surpassed his receiving total from 2021 with 28 catches.

Styles has caught at least one pass in every game this season for the Irish, including the first of the season-a 54-yard grab against Ohio State. He can go deep but has generally caught most of his other passes on intermediate routes. He’s on the verge of surpassing his strong freshman numbers from last season but will be up against a top talent like Williams.

Williams very well could be the first Syracuse player taken in the 2023 NFL draft but he sat out the Clemson game due to injury. He’s got strong coverage skills and can deliver hard hits to ballcarriers. He’s also quick enough to make stops behind the line and in the past has shown a knack for swatting away passes. If he’s still unable to go, look for senior Isaiah Johnson to get the call.

Foskey will be coming from both sides during the course of this game, but his biggest test will come against Bergeron. After collecting three sacks and blocking two punts on Saturday, Foskey is eager to build on that outstanding performance. He’ll be going up against a Syracuse offensive front that’s allowed 18 sacks this season.

Bergeron is the best of that Orangemen line and offers an imposing figure at 6-foot-5 and 320 pounds. He has the athleticism to thrive on the field, even though his pass-protection skills don’t quite measure up to his run-blocking ability. Going up against Foskey will require a major effort from him, especially since he’s protecting Shrader’s blind side. 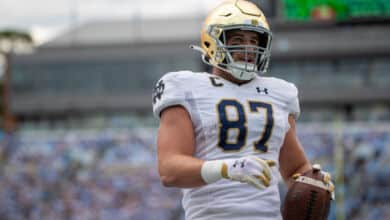