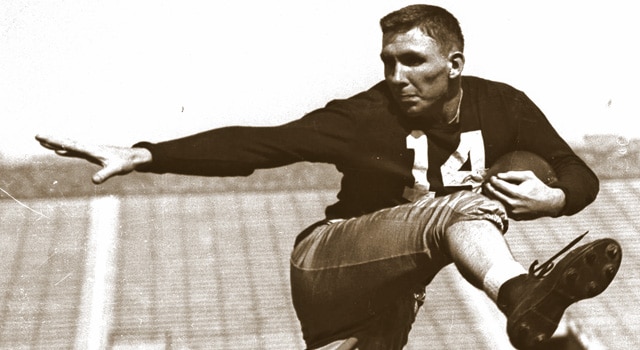 As Frank Leahy was looking to replenish the glistening treasure of the ’46 recruiting class that was finally depleting in 1949, he looked to the wealth in the Chicago Catholic League.

Leahy ventured to Oak Park, a near west suburb of Chicago to Fenwick High and John Lattner.  Fenwick was run by the Dominicans and was named after  a Bishop Fenwick from Cincinnati.  Fenwick became one of the lead tributaries of the Chicago Catholic League feeder system for Notre Dame along with Gordon, Brother Rice, St. Rita’s, DeLaSalle  and Mt. Carmel.

Lattner started to get his Irish up when people chided him that he’d never play a down at Notre Dame. Lattner’s senior season at Fenwick was 1949 when Hart and the Irish were finishing the glittering 36-0-2 stretch. And the Irish had hundreds of thousands of fans in Chicago.

John Lattner thought that he would go to one of the small Catholic colleges if his family could afford it.  But by his senior year at Fenwick he had “blown up” in the modern phrase.   He was inclined to go to Michigan which ran the same offense as mighty Fenwick. They ran the same single wing offense.  Notre Dame was running the split T that Leahy had introduced in the early ‘40’s.

But that changed when people started telling Lattner that he shouldn’t go to Notre Dame because  he would just be a number there. That ignited the fire within John Lattner and he decided to go to Notre Dame and see how “bad and inadequate” he really was.

And so Lattner headed to South Bend.  Lattner’s father took ill with cancer his freshman year,  and passed away during spring practice. Before he died, Notre Dame quarterback  John Mazur visited Lattner’s father in Chicago and promised his son would  score in his first varsity game as a sophomore. Mazur was good to his word.

Lattner was 6’2 195″, not at all a “scatback.”  And he was one of the most versatile halfbacks ever to play for the

Johnny Lattner had a special relationship with his head coach. Lattner could effect a beautiful brogue so rich and sweet. He used this to  imitate Leahy,  especially at those glorious Leahy’s Lad’s reunions.

Lattner had his own defining moment with Leahy.

Oct. 19, 1952 was one of those days in Notre Dame football history that Alice (in or out of Wonderland) would have described as “curiouser and curiouser” as the Irish trekked to the banks of the Wabash to play the Boilermakers. Notre Dame fumbled ten times that day, but had fewer fumbles than the Boilers, who put it on the Ross-Ade turf 11 times!

Of the 21 fumbles, the Irish, who were FIGHTING, recovered 15.  John Lattner, then the star junior right halfback accounted for half of the Irish fumbles, five.

Somehow, the Irish won, 26-14.  Lattner was shrinking from Leahy’s steely gaze and asked permission to go back to Chicago to visit a friend of his who was ill.  Leahy granted the permission but it only postponed the inevitable lecture from Leahy.  In the meantime, while Lattner was performing a Corporal Work of Mercy and visiting the sick, Leahy was working up a good lather.  Somber, nearly ecclesiastical, in a story that Lattner loved to tell on himself, when Leahy did summon Lattner on his return to campus, he conjured up his own Leahyesque version of the Summa Theologica.  Frank Leahy advised the halfback to “Get to a priest and confess those five Mortal Sins you committed against Purdue!” Whether Lattner did so confess is unknown locked forever in the seal of confession, but he did carry a football around the campus the next week.

Lattner was a GREAT, not a good defensive back. Many contend that he, even more than Johnny Lujack was the best defensive back to ever play at Notre Dame, at least before Luther Bradley arrived.

He was named first team All-American on both the offensive and defensive sides of the ball after the 1952 and 1953 seasons.  In today’s world of unlimited substitution and “substitution packages” it is hard to grasp how extraordinary this was.  Lattner’s career total of 12 interceptions. This is just one behind the 13 of Joe Restic and Mike Townsend who are tied for second behind Luther Bradley’s astounding total of 17.  Lattner’s total is a head-shaker for a great offensive player.

Then, as  a Junior in 1952 Lattner was the full-time starting right halfback. The backfield was strong and balanced with Neal Worden and Joe Heap. Still, Lattner led the pack with 149 carries for 734 yards. He caught 17 passes for 14.8 yards per catch. He returned 3 kickoffs and returned 7 punts for 16 yards a carry, all while intercepting 4 passes.

America took notice and even though a Junior, Lattner won the coveted Maxwell award, while finishing 5th in the Heisman Trophy voting behind Billy Vessels of Oklahoma.

In their second year as a unit in 1953, the Notre Dame backfield of Lattner, Quarterback Ralph Guglielmi, Halfback Joe Heap and Fullback Neil Worden  resembled the great backfields of ‘24 (the Four Horsemen) and ’43.

The last defender against an Oklahoma screen pass, Lattner sliced through three Sooner blockers in an open field to make the tackle in the “defensive play of the season.”

Later he intercepted a Sooner pass at the Notre Dame 32 yard line to preserve the 28-21 triumph.

When Georgia Tech came to South Bend, IN with a 31 game undefeated streak, the Fighting Irish triumphed 27-14.  Lattner celebrated his 21st birthday that day by setting up the first touchdown by returning the opening kickoff 80 yards, gaining 101 yards rushing and scoring one touchdown. He returned kickoffs for touchdowns of 86 yards against Purdue and 92 yards against Penn.  He then scored four touchdowns to lead the Irish romp over USC 48-14 before a bewildered 98,00 at the LA Coliseum.

John Lattner did it all in the 9-0-1 (14-14 tie with Iowa) campaign. Maryland won the AP vote which was taken before the Bowl Games, but Maryland lost a 7-0  shutout to Oklahoma, and the unofficial consensus was that the Irish were more deserving of the National Championship.

Lattner carried 134 times for 651 yards, just shy of 5 yards per carry.  He caught 14 passes for 204 yards, 14.6 yards per reception.  He returned 8 kickoffs for an Ismailian 40 yards per return and brought back 10 punts for a symmetrical 10 yards a return, all while intercepting his annual harvest of four interceptions

Lattner was certainly adding up yardage and he outstripped the statistical performance of all previous Notre Dame stars as he established a record for all purpose yards which stood for a quarter century until Vagas Ferguson broke it in 1979.

Did the ’53 Rule Change Help Lattner Convince the Heisman Voters?

Through the ’52 season, college football allowed unlimited substitution.  But the mavens changed the rules for the ’53 season and basically made players go both ways with very limited substitution. This rule, which ran through ’63 would impact another Notre Dame Heisman winner, John Huarte,  when it was changed again.

But in ’53 all the college players had their defensive deficiencies exposed when the opponent had the ball.  Sort of a nice year to be an All-America defensive back, as Lattner was.

Lattner appeared on the cover of Time Magazine on November 9, 1953 with the caption “a bread and butter ball carrier”, a phrase bestowed upon Lattner by Leahy. Such publicity and an endorsement from the guy who’d coached 3 Heisman laureates (and had one frosh in the incubator-Hornung) were important.

The Irish, despite the tie against Iowa were awarded many of the national championship awards, but Maryland was chosen as champion by the AP and UPI for 1953. And most legitimate scholars consider those two the most prestigious.

It is poignant that Lattner played his last game in the last game that the incomparable Francis William Leahy ever  coached at Notre Dame.  It was the end of an era.

Lattner is a member of the College Football Hall of Fame.