Notre Dame is adding another super talented tight end recruit to the program with Staes. Prior to committing to Notre Dame, Staes picked up offers from Alabama, Auburn, Florida State, Georgia, LSU, Michigan, Ohio State, Oregon, Texas, and USC among others. Staes was also previously committed to Penn State until early February.

The commitment of Staes not only continues Notre Dame’s string of success recruiting the tight end position, but also their success recruiting in the state of Georgia. Notre Dame not so subtly pivoted a lot of its resources that it used to pour into Florida, into Georgia over the last few years and the results have been tremendous so far.

Notre Dame signed three players from Georgia in this most recent cycle – Jayden Thomas, Deion Colzie, and Khari Gee – and has two commitments from Georgia at the moment with Staes joining DE Darren Agu (though Agu is originally from Ireland).

Staes plays in a run-dominated offense at the moment, but he projects to be another big-time receiving threat at tight end for Notre Dame. There are bound to be comparisons between Staes and Tommy Tremble with both coming to Notre Dame from Georgia. Tremble, a recent third-round pick of the Carolina Panthers built a reputation as an elite blocker at Notre Dame. That run-first offense that Staes plays in at Westminster School in Atlanta will probably keep Staes from moving up too high in the recruiting rankings since he likely won’t put up huge numbers this fall, but this is a big-time commitment for the Irish.

With Staes and Raridon now on board, Notre Dame is done recruiting the tight end position for the class of 2022. The Irish also added two tight ends in the 2021 cycle in Cane Berrong and Mitchell Evans. 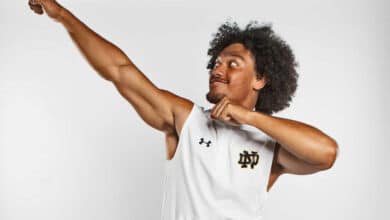