Notre Dame football could be getting some more good news on Monday. Top-100 overall linebacker prospect Jaylen Sneed will announce his college decision then with Notre Dame and Oregon the reported finalists for his commitment. Notre Dame is believed to be in the driver’s seat heading into the announcement.

Sneed is the #8 linebacker and #70 overall prospect in the country according to the 247Sports Composite Rankings.

Oklahoma and Tennessee are listed as finalists as well, but Sneed only visited Notre Dame and Oregon, and the two are widely considered the only serious contenders in Sneed’s recruitment.

The Crystal Balls at 247 have been beyond fickle for Notre Dame over the last month, but at the moment, the CB’s all point in Notre Dame’s favor. Anything can happen in recruiting, of course, but all signs point to good news for Notre Dame on Monday.

Should Sneed select the Irish, new Notre Dame defensive coordinator, Marcus Freeman will have pulled off one of the single best linebacker hauls in recent Notre Dame history. Notre Dame already has secured commitments from Joshua Burnham, Nolan Zieger, and Nuiafe “Junior” Tuihalamaka are all on board already. All three are 4-star players, with Burnham and Tuihalamaka just outside the top-100 overall.

Should Sneed commit to Notre Dame on Monday, the Irish will move back into 2nd place in the 247Sports Team Rankings – assuming no other major commitments from the schools around them until then.

Notre Dame is getting close to finished on the defensive side of the ball. After that, it’s Sneed or bust at linebacker. In the secondary, Notre Dame awaits decisions from Benjamin Morrison, Jake Pope, and Xavier Nwankpa. The first two should come soon, while Nwankpa’s will likely linger into the fall. Notre Dame is also still pursuing edge rusher Cyrus Moss. His recruitment will stretch into the fall as well.

Podcast: Breaking Down Notre Dame's Offense with Jamie Uyeyama and We Have a Killer New Intro 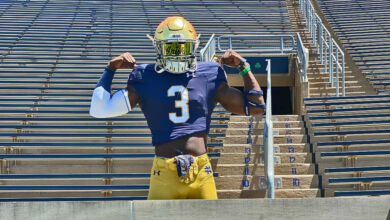 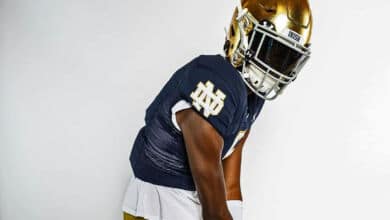 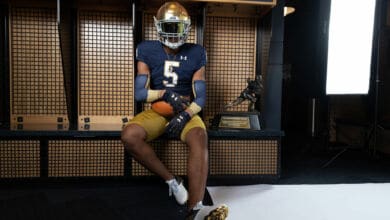 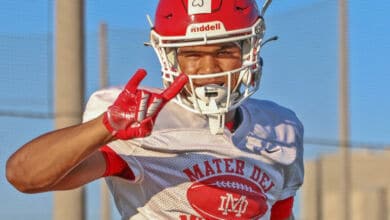